The settlements, checkpoints, and walls that have been the reality for Hebron’s Palestinian population are now being copied everywhere across the West Bank. 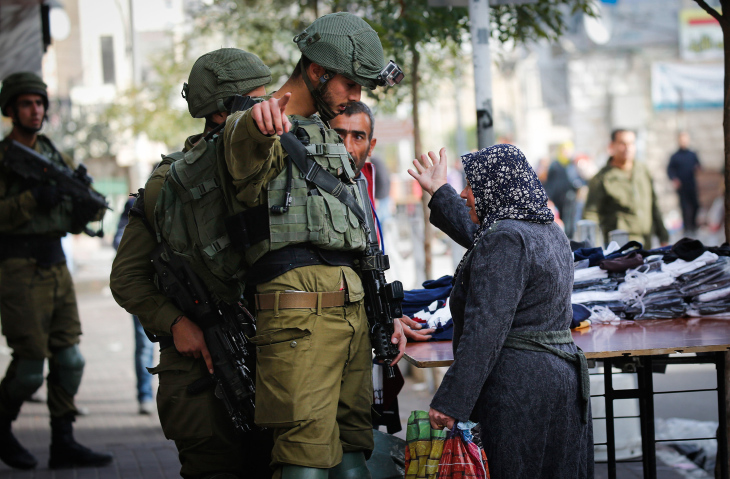 Israeli soldiers argue with a Palestinian woman during clashes at a protest against U.S. President Donald Trump’s decision to recognize Jerusalem as the capital of Israel, Hebron, December 10, 2017. (Wisam Hashlamoun/Flash90)

First-time visitors to the Jewish settlement in Hebron’s ancient city center might feel as though they have stepped into the heart of darkness. This is where the Israeli military occupation’s policies have reached the pinnacle of barbarism: regiments of soldiers are deployed to protect 700 Jewish settlers who live in an enclave that has been turned into a site of urban collapse as a consequence of the army’s security measures. The 200,000 Palestinians residents of the city can do nothing to counter the oppressive measures that make their lives all-but unbearable.

In Hebron, the army has destroyed or sealed the Mamluk-era homes lining the so-called Worshippers Way, a footpath reserved exclusively for Jewish settlers as their route to the Cave of the Patriarchs. Shuhada Street, once the bustling commercial hub of the entire southern West Bank, echoes with silence; merchants have abandoned their shops and nearly all the residents have left. Nor is it possible to ignore the dozens of checkpoints equipped with advanced facial recognition technologies. These 21st century iterations of medieval fortresses keep the Jewish settlement separate from the rest of Hebron.

A few Palestinians have remained, although their lives are controlled and managed by Israeli security forces. Almost all of them say they would have left the ghost town Israel has trapped them in long ago, if only they could. Every daily activity — going to school or work, visiting and receiving visits from family, attending family events, even shopping — involves lining up at checkpoints and being subjected to humiliating treatment.

Soldiers, police officers, and settlers commit acts of violence against Palestinians nearly every day, with near-total impunity. Soldiers subject Palestinians to humiliating searches, raid their homes in the middle of the night, and carry out false arrests. These are all common aspects of the occupation as a whole, but in Hebron they are far more intense.

In 2007, Hagai Alon, then aide to former Defense Minister Amir Peretz, said that the goal of these policies was “to empty Hebron of Arabs” — in other words, to evict the civilian population by force. Under international humanitarian law, the forcible transfer of a civilian population is a war crime.

The Hebron model is not unique. The occupying forces use the same tactics all over the West Bank, in different measures but with the same goal — the increasingly violent dispossession of Palestinians from their homes and lands. Settlements, checkpoints, and walls are closing in on the major Palestinian urban centers, as they are on villages like Susiya and Khan al-Ahmar. Residents in these two particular villages are also facing the threat of expulsion in an effort to force them into larger enclaves. The same thing is happening in the Shiloh Valley, the Talmonim settlement bloc, throughout the Jordan Valley where outposts have been springing up, in East Jerusalem, around Bethlehem, and in the southern West Bank. In other words, it’s happening everywhere.

Israel’s best and brightest have had a hand in this injustice: Supreme Court justices, senior military and security establishment officials, members of the Military Advocate General and the State Attorney’s Office, and, of course, politicians on the left and right. They have all tolerated the violence, in Hebron and everywhere else in the West Bank. They have all legitimized the dispossession of Palestinians and the theft of their property — and not just in Hebron. They have all supported the ongoing oppression of the Palestinians, even after the heinous effects of this policy became clear.

The settlers like to say “Hebron: then and forever.” But Hebron is much more than that: it is here, there and everywhere. Open your eyes in Hebron and you’ll see the whole of the occupied territories.

Eyal Hareuveni is a researcher with B’Tselem. This article was first published in Hebrew on Local Call. Read it here.