Party’s Secretary-General: “we feel closer to the settlers than to the far left” 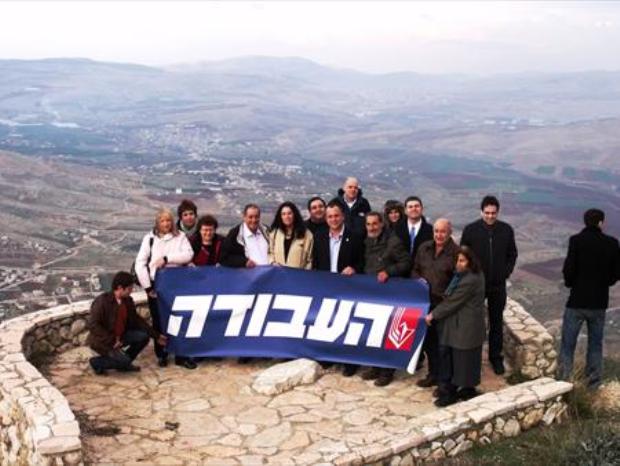 Labor party member at Alon Moreh (photo: Yesha Council)
Last week, members of the Labor party, including the party’s Secretary-General Hilik Bar and several advisers to Knesset Members and ministers, went on a visit to the West Bank. Labor members visited the Barkan industrial park, the Ariel academic center and several settlements in the area of Nablus, east of Israel’s security barrier and well outside what is sometimes referred to as “the settlements blocks”. The tour was hosted by the head of the Yesha Council (the settlers’ representative body), Danny Dayan.
Rightwing journalist Hagai Huberman, who covered the visit for the Yesha Council, later posted the above picture  on Mysay.co.il site. It shows Labor member in Alon Moreh (near Nablus), one of the birthplaces of the settlements movement. This is also from Mr. Huberman’s report:

Hilik Bar, the new secretary general of the Labor Party, surprised his hosts by saying: “Judea and Samaria is the land of our fathers and the Bible, and the Labor Party and its members are not disconnected from what this region represents, historically and religiously. We should all stay true to the legacy of the nation’s Fathers and Mothers, and pass it on from generation to generation. Labor belongs to the center and not to the far left […] we feel closer to the settlements’ people here than to the far left.”

While Mr. Bar’s hosts might have been surprised by these remarks, those who know Labor have given up hope on this party a long time ago. Labor, it should be reminded, never evacuated a single settlement. In fact, the colonization of the West Bank started on the party’s watch back in the seventies, and a decade ago, under Ehud Barak’s short lived government, the settlements prospered in ways Binyamin Netanyahu could only dream of. Mr. Bar – a former adviser to Labor’s strongman Binyamin “Fuad” Ben-Eliezer – is right: in visiting the West Bank’s settlements, he simply follows the party’s line.
Related posts:
The myth of “good Israel” vs. “bad Israel”
The myth of “good Israel” vs. “Bad Israel” (II)
Get Our Weekly Newsletter