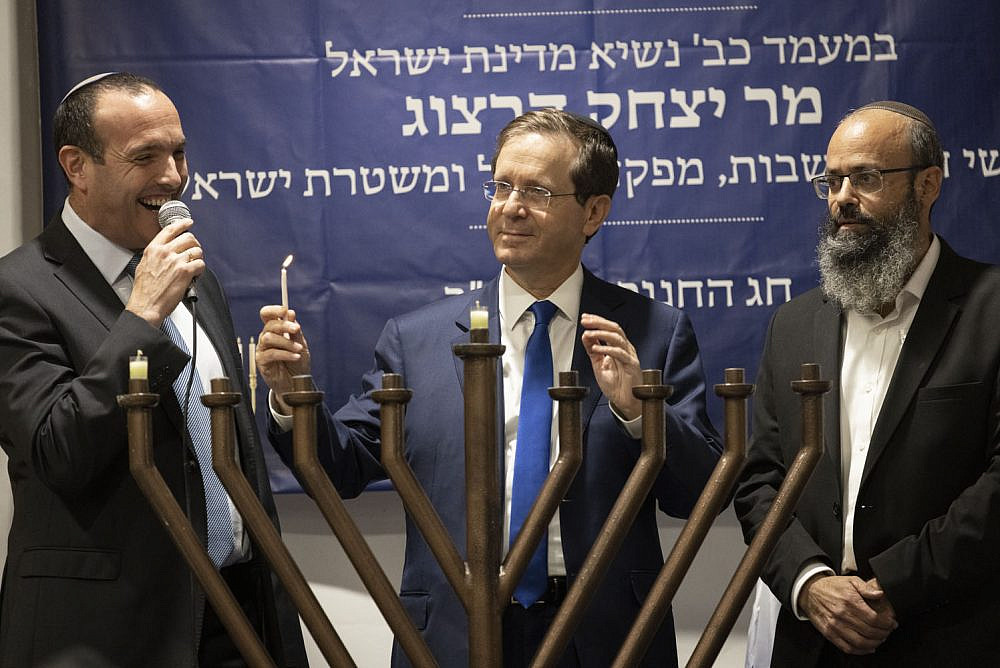 Israeli President Isaac Herzog lighting a candle during a ceremony marking the first night of Hanukkah in the Tomb of the Patriarchs/Ibrahimi Mosque in the Old City of Hebron, occupied West Bank, Nov. 28, 2021. (Oren Ziv)

“We have to continue dreaming of peace,” declared Israeli President Isaac Herzog at a candle-lighting ceremony marking the first night of Hanukkah on Sunday afternoon, “and to condemn any type of hatred or violence.” The noble message may have been more believable were it not for the location that Herzog had chosen to mark the Jewish festival: a settler event inside the Tomb of the Patriarchs/Ibrahimi Mosque in occupied Hebron in the West Bank, a city that starkly embodies Israel’s regime of segregation and Jewish supremacy.

Herzog’s office announced last week that the president would be attending the Hanukkah ceremony in Hebron’s Old City, where a Jewish settler population of around 800 resides under the guard of an almost equal number of Israeli soldiers and border police. The tomb/mosque is said to be the burial place of Abraham and his family members, revered by the monotheistic faiths.

The Old City is also home to about 35,000 Palestinians, whose freedom of movement in the areas of Jewish settlement has been severely curtailed ever since Baruch Goldstein, a Jewish settler, opened fire inside the mosque in the middle of Muslim prayer 27 years ago, killing 29 worshippers and wounding over a hundred more; Goldstein’s grave can be found in the neighboring settlement of Kiryat Arba, in a park named after his idol, the extremist leader Meir Kahane. The holy site has since been divided into two separate halls for Jewish and Muslim visitors.

As Herzog arrived on Sunday afternoon, the presence of hundreds of Israeli soldiers obscured his view of Shuhada Street, one of several roads closed to Palestinian traffic to keep the area “sterile” for Jewish settlers. What was once a Palestinian city center bustling with life is now a ghost town, cleansed of all but a few of its most steadfast Palestinian residents. 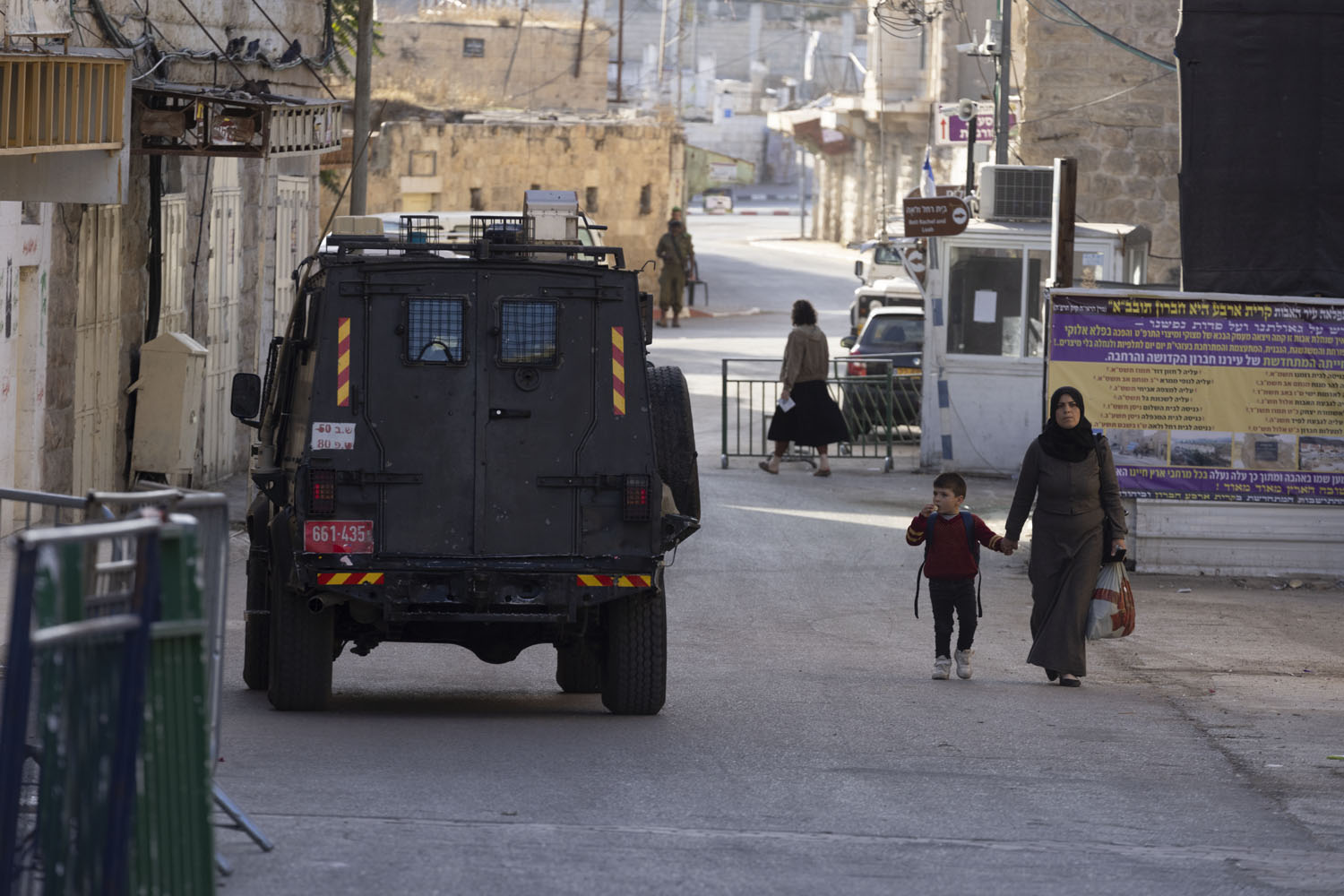 The only shops left operating on Shuhada Street, right in front of the tomb into which Herzog was escorted, were hidden behind military vehicles, and had been ordered to close early in honor of the day’s festivities. If he had walked around the corner, Herzog might have seen the graffiti on the walls reading “gas the Arabs.”

None of this seemed to bother the president as he embarked on a special tour around the tomb led by Eliyahu Libman, head of the Kiryat Arba regional council, and Hillel Horowitz, head of Hebron’s Jewish community. In doing so, Herzog became the first sitting president to be hosted inside the tomb/mosque itself since Israel occupied the city in 1967. Local settler leaders could hardly contain their glee at receiving such a lofty stamp of approval. Horowitz, for example, told the audience that Herzog’s visit “reminds us that we did not take the land of foreigners,” adding “Your visit here strengthens our mission.”

Hebron’s small Jewish community is home to two Knesset members from far-right parties — Itamar Ben-Gvir and Orit Strook — both of whom were inside the event hall as Herzog made his way to the candle-lighting ceremony. Ben-Gvir, who until recently had a picture of Baruch Goldstein hanging up in his home, was taking selfies with Israeli soldiers while he waited. Also present was Shmuel Meidad, head of the far-right NGO Honenu, which provides legal representation for Jewish terrorists and previously supported their families financially. 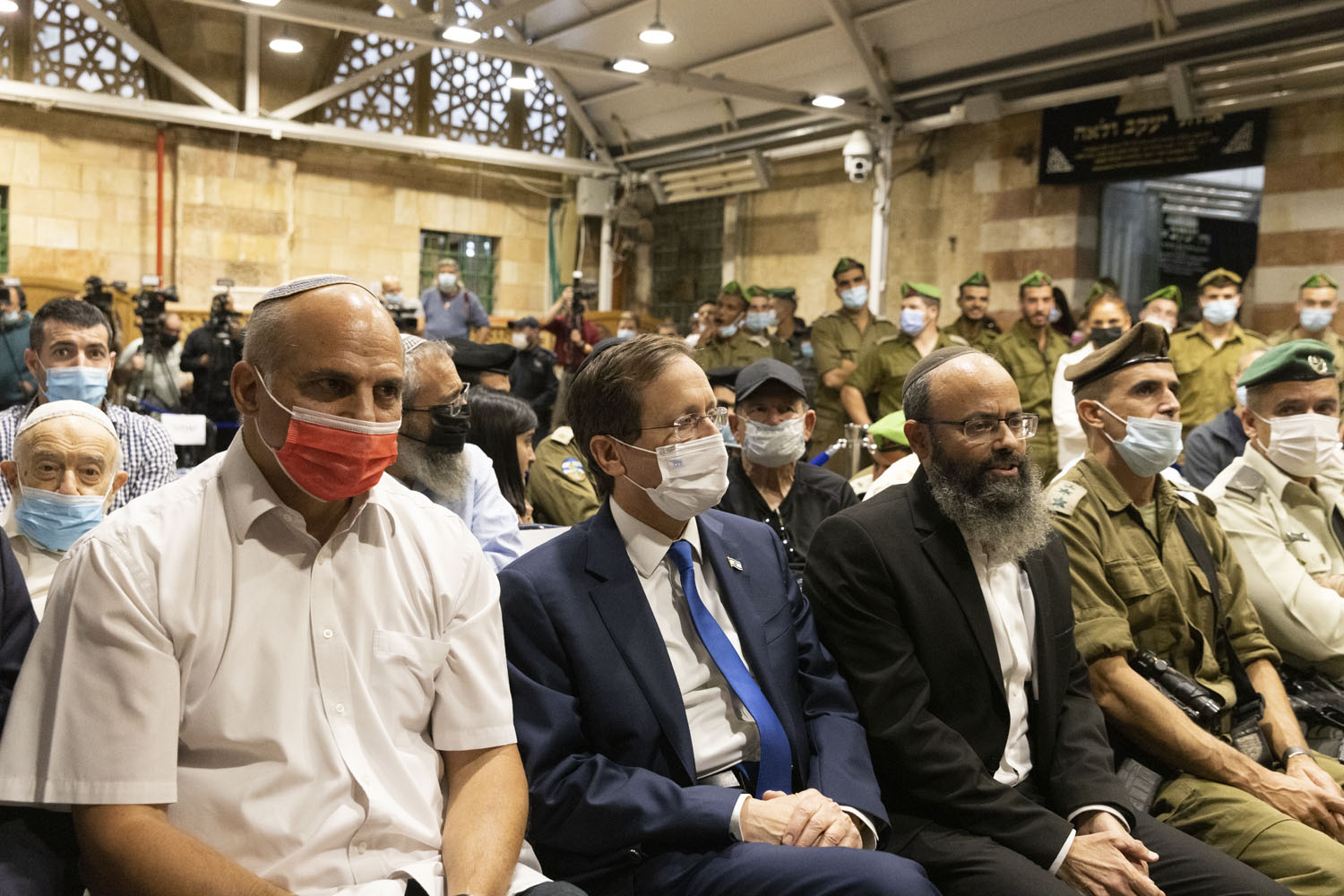 Israeli President Isaac Herzog attends a ceremony marking the first night of Hanukkah in the Tomb of the Patriarchs/Ibrahimi Mosque in the Old City of Hebron, occupied West Bank, Nov. 28, 2021. (Oren Ziv)

In a short speech, Herzog first noted that the Jewish connection to Hebron is “beyond all controversy.” He spoke about the Hebron massacre of 1929, a violent Palestinian mass uprising in opposition to growing Zionist settlement under the British mandate, in the course of which the city’s small but historic Jewish community was forced out. Herzog’s relative, he relayed, managed to survive by playing dead. The president had nothing to say about the more recent Goldstein massacre, which took place just a few meters from where he lit the candles on the hanukkiah.

‘Our enemy is the occupation, not religion’

Badee Dwaik, head of the Human Rights Defenders Association in Hebron, is a Palestinian resident of Hebron’s Old City, where just last month, Israel began the construction of 31 new housing units that will comprise the “Chabad Quarter” — the first new Jewish neighborhood to be built in the city since 2001.

Dwaik had his own message for the Israeli president: “You are using religious occasions to escalate oppression and abuse against the Palestinians, igniting the situation as if it were a religious conflict. Our enemy is the occupation, not the Jewish religion. Neither you nor your occupation are welcome in Hebron or in Palestine,” he said in a phone interview. “We will continue to resist your occupation and expose your crimes until the apartheid regime you built is overthrown.” 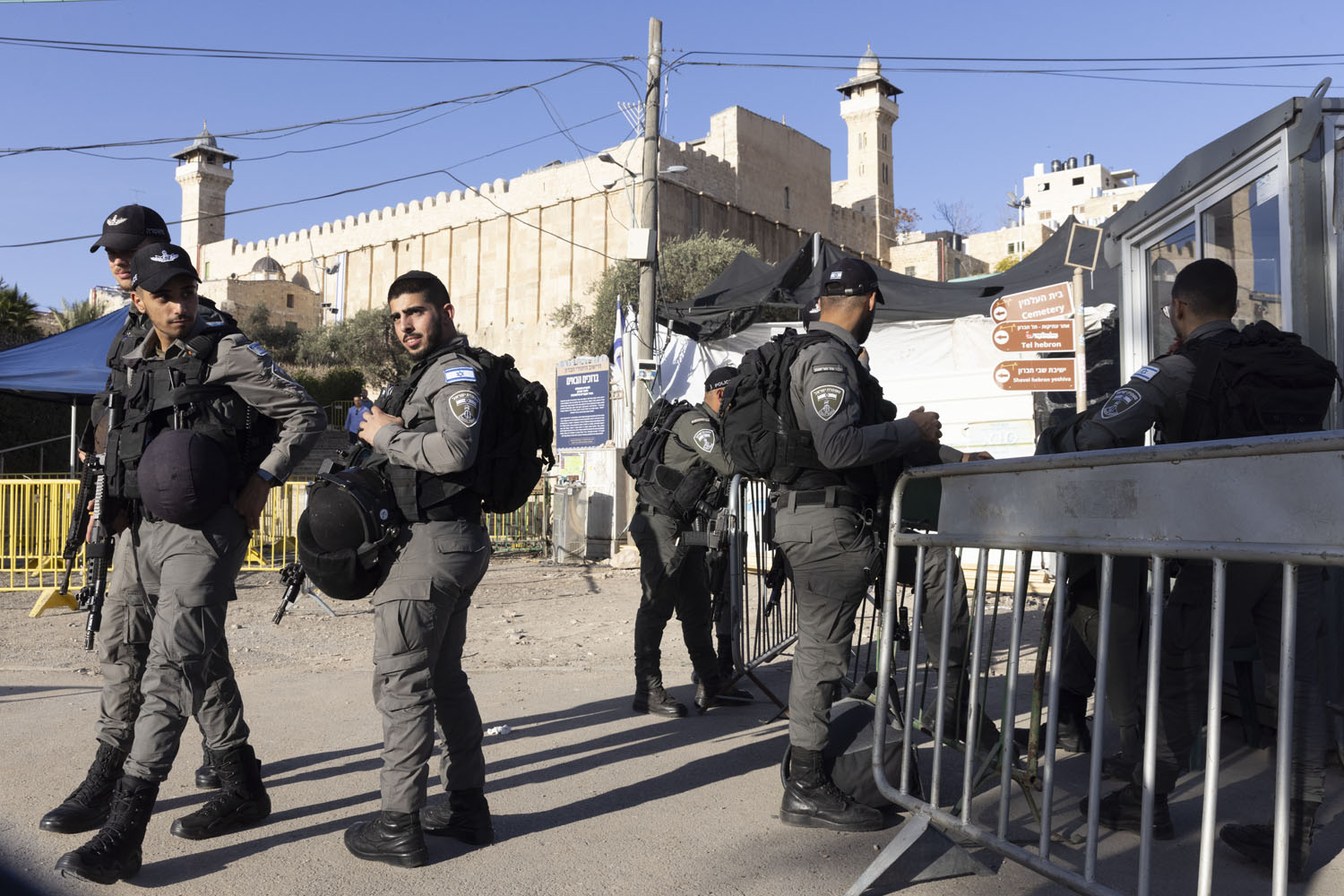 Israeli Border Police guarding in front of the Tomb of the Patriarchs/Ibrahimi Mosque in the Old City of Hebron, West Bank, Nov. 28, 2021. (Oren Ziv)

Earlier in the day, Palestinian residents of Hebron came to the entrance of the mosque to demonstrate against Herzog’s arrival. Israeli border police forcibly dispersed the small crowd, seizing the Palestinian flags that they held and detaining some of the protesters.

Meanwhile, three buses full of left-wing Israelis from Jerusalem and Tel Aviv — organized by anti-occupation groups including Breaking the Silence, Peace Now, and Mehazkim — drove toward the Old City to protest Herzog’s visit. In a rare move, however, the Israeli police issued an order blocking the activists from entering the Old City altogether, forcing them to demonstrate at the checkpoint outside the Kiryat Arba settlement under the watch, and sometimes the fists, of several dozen border police and undercover officers.

The police’s diversion of the demonstration redirected much of the protesters’ focus onto the police themselves and the nearby settlers, who arrived waving Israeli flags and playing Hebrew music through loudspeakers to drown out the protesters’ chants. 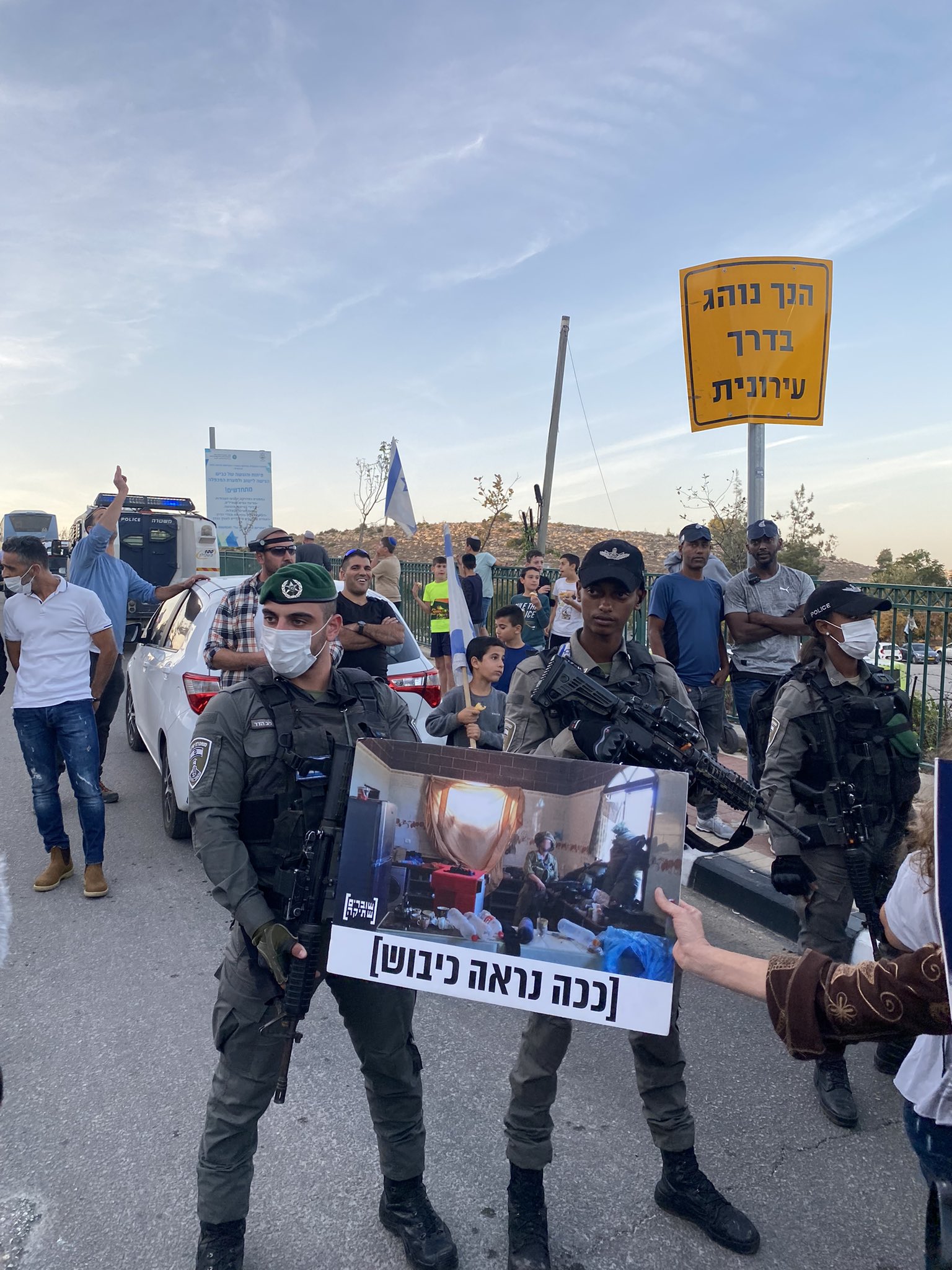 A protester places a sign in front of Israeli soldiers reading ‘This is what occupation looks like,’ during a demonstration against President Isaac Herzog’s visit to a Hanukkah ceremony in Hebron, Nov. 28, 2021. (Ben Reiff)

Moshe Butavia, the civilian security coordinator (or “ravshatz” in Hebrew) of Kiryat Arba — the army’s designated go-to person in each settlement for security-related matters, who in practice often gives orders to the soldiers — tried to drag Hazem Bader, a Palestinian photojournalist with the Agence French-Presse (AFP) news agency, away from the entrance to the settlement. “He has a green ID,” Butavia is heard saying in a video of the incident (filmed by Ori Givati of Breaking the Silence), referring to Bader’s Palestinian identification card.

Meretz MK Mossi Raz, who was present at the demonstration, said: “We came here today to oppose the fact that in Hebron there are places only for Jews. This is not a place for the president of Israel to go — outside of Israel — on the first day of Hanukkah.”

Eran Nissan of Mehazkim, a digital campaigning movement active on various progressive struggles in Israel, echoed this sentiment: “If ever there were a place where the word ‘apartheid’ is relevant to the Israeli case, it’s Hebron. We came to protest Herzog’s shameful decision, and were met with anti-democratic military restrictions and police violence.”