Despite their intentions, the new EU guidelines may serve as a boost for an already growing industry of lies and deceit, meant to hide away settlement products and other forms of occupation profiteering.

Judging by the front pages of all Israeli newspapers today (Wednesday), the new European Union guidelines have nearly put the country in a state of emergency. As Noam Sheizaf puts it, Europe has gotten our attention. The new guidelines for European grants, prizes and programs are a serious and positive step in the ongoing attempt to clarify for Israelis that settlements are not just regular Israeli towns and cities, but are deeply entrenched and fortified in an apartheid-style regime. They are also likely to cause (and are already causing) the Israeli government a serious headache as it would not be able to sign declarations pledging separation between projects taking place on both sides of the Green Line. That would be political suicide.

However, the catastrophic implications for the Israeli economy might not be as dramatic as some might be tempted to think. In fact, Israeli companies already have systems in place to avoid sanctions and boycotts of this sort due to their ongoing struggle against the international BDS (Boycott, Divestment and Sanctions) campaign.

Take, for example, the second point in the new guidelines, which specifies that “The place of establishment is understood to be the legal address where the entity is registered, as confirmed by practice postal address corresponding to a concrete physical location.” I can imagine several industrialists having a good laugh at this one. As the Who Profits project shows, Israeli companies that operate in the occupied territories have been solving this problem quite well with a complex system of deceit. SodaStream, for example, is one of several companies that rents an office in Airport City, adjacent to the Ben-Gurion International Airport, using it as its official address to hide its factory’s location in the Mishor Adumin industrial park in the West Bank (see pages 27-9, PDF). AHAVA cosmetics use the same trick with their small office in Lod, also near the airport, despite the fact that manufacturing only takes place in the Mitzpeh Shalem settlement (see page 44, PDF). Settlement agricultural produce is marketed under the nation-wide exporting company Agrexco, also not recognized internationally as an occupation profiteering company. All these measures help companies dodge the special taxes levied on settlement products. 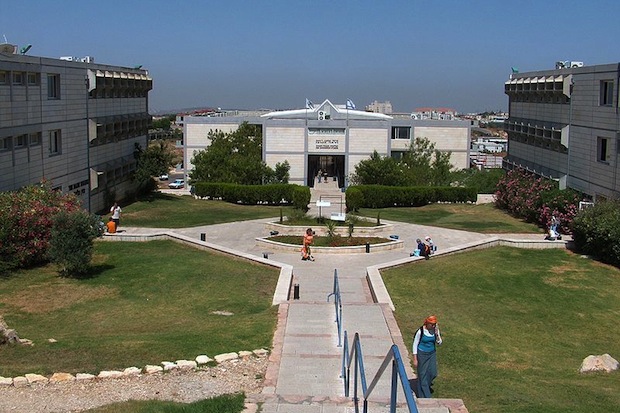 College in Ariel, West Bank, operating under the “Council for Higher Education – Judea and Samaria”  (Wikimedia CC BY SA 3.0)

In a way, the state itself works in a similar fashion. When authorities wanted to open a new regional radio station for settlements and were challenged for it in court, they set up a mirror regulator which regulates privately owned television and radio. The new regulator, “The Second Authority for Television and Radio – Judea and Samaria,” is similar to its pre-67 borders sibling in every way, except that it operates under martial law. The same goes for the Council for Higher Education (CHE), which has a military sponsored “Judea and Samaria” sibling that regulates Ariel University, allowing the CHE to be “clean” of settlement involvement, although universities and colleges under its auspices do have their own connections with the settlement campus.

One can easily picture how the new EU guidelines will give rise to this sort of deceitful trickery. More and more companies might start renting Tel Aviv or Lod or Airport City box-sized offices to fake their manufacturing address. Or perhaps they will set up a series of front organizations to separate between their work in the occupied territories and their international dealings. Banks might break up their mortgage and loan operations for settlements and set them up as external banking companies located in the Cayman Islands. Who knows, maybe the state will be able to avoid its own political entanglement by creating these complicated systems of charades? It might work, but it will drive a constantly growing segment of society to doing things that are more commonly associated with crooks and wrongdoers. And maybe it will be that feeling that will one day help end the occupation.

It is that notion that brings to mind the opening chapter in J.M. Coetzee’s Summertime, in which he writes the following (J.M. Coetzee, Summertime, 2009, Viking Press):

Once upon a time he used to think that the men who dreamed up the South African version of public order, who brought into being the vast system of labour reserves and internal passports and satellite townships, had based their vision on a tragic misreading of history. They had misread history because, born on farms or in small towns in the hinterland, and isolated within a language spoken nowhere else in the world, they had no appreciation of the scale of the forces that had since 1945 been sweeping away the old colonial world. Yet to say they had misread history was in itself misleading. For they read no history at all. On the contrary, they turned their backs on it, dismissing it as a mass of slanders put together by foreigners who held Afrikaners in contempt and would turn a blind eye if they were massacred by the blacks, down to the last woman and child.

Alone and friendless at the remote tip of a hostile continent, they erected their fortress state and retreated behind its walls: there they would keep the flame of Western Christian civilization burning until finally the world came to its senses.

That was the way they spoke, more or less, the men who ran the National Party and the security state, and for a long time he thought they spoke from the heart. But not any more. Their talk of saving civilization, he now tends to think, has never been anything but a bluff. Behind a smokescreen of patriotism they are at this very moment sitting and calculating how long they can keep the show running (the mines, the factories) before they will need to pack their bags, shred any incriminating documents, and fly off to Zurich or Monaco or San Diego, where under the cover of holding companies with names like Algro Trading or Handfast Securities they years ago bought themselves villas and apartments as insurance against the day of reckoning (dies irae, dies illa).

Related:
The day Europe got Israel’s attention
Israel responds to EU: We only accept charity on our terms
What’s in the new EU guidelines regarding activities beyond the Green Line?
Can the EU’s settlement exclusion push the U.S. to follow suit?