High Court freezes Muhammad Allan’s administrative detention order. Decision comes hours after state announces it will release him should it be proven that he has suffered permanent brain damage.

According to Haaretz, the court order does not release Allaan from administrative detention, but rather freezes the order for the period of his treatment in Barzilai Hospital. When his condition stabilizes, Allan may petition authorities to be transferred to another hospital. The response to that will be at the discretion of the court. 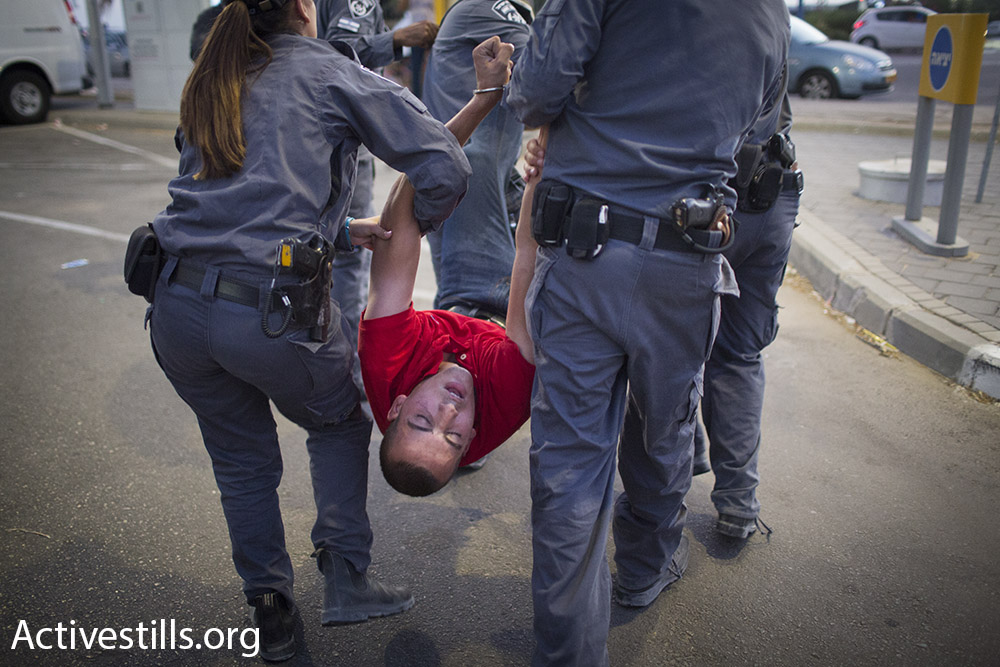 Israeli police arrests a Palestinian protester at a demonstration for the release of hunger striker Mohammad Allan, outside of Barzilai hospital in Ashkelon, Israel, August 16, 2015. (Oren Ziv/Activestills.org)

The High Court’s decision comes two days after the state rejected a petition to drop the administrative detention orders, saying instead that it would be willing to release Allan on the condition that he be deported and live outside of the country for a period of four years.

On Wednesday, the state announced that Allan would be released should it be proven that he suffered permanent brain damage. Hours later, an MRI test revealed he had suffered irreversible neurological damage as a result of vitamin deficiency, according to medical officials.

Haaretz also reports that the deterioration in Allan’s medical condition began after his doctors took him off the inhalator and anesthesia on Tuesday. He was reported to be conscious and able to communicate, and in stable condition.

Allan, 31, a lawyer from the area of Nablus, has been held by Israel in administrative detention since November 2014. According to the Shin Bet, he is accused of being a member of Islamic Jihad, and poses a danger to the security of the state. However, as an administrative detainee, he is neither put on trial nor does he have the right to be made aware of the evidence held against him by the state.

On Monday a demonstration outside Barzilai Hospital against Allan’s detention was violently suppressed by Israeli police, who also stood by as right-wing Israeli activists attacked the protestors.