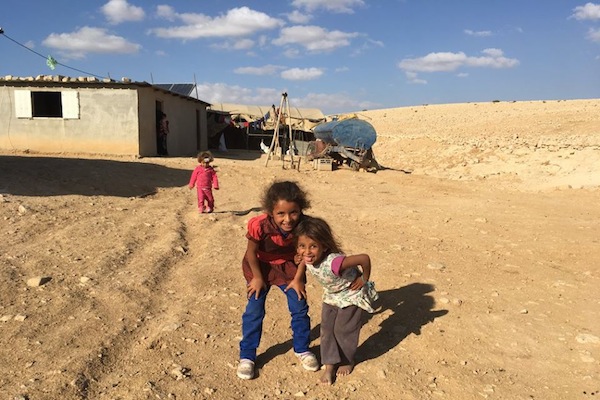 Children seen at Dkaika, a Palestinian village in the south Hebron Hills, slated for demolition. (Rabbis for Human Rights)

Israel’s High Court of Justice is set to decide the future of a small Palestinian village in the West Bank next week. Dkaika, located on the edge of the South Hebron Hills in Area C, is living under the shadow of demolition, with the state threatening to uproot its villagers by March 2018. The village’s 300 residents are to be expelled to the nearby village Hamida — which is also under threat of demolition.

The High Court is set to hear the case on July 17.

Out of Dkaika’s 140 structures, 114 are slated for demolition. In order to prevent the expulsion, the village submitted a detailed plan, put together by Professor Rasem Khamaisi, to the state. The Civil Administration rejected the plan, and in 2014 the village petitioned the High Court to demand the state either accept the plan, or order the Civil Administration to come up with its own that will allow the village to remain in its current location.

Should the petition be rejected, or should the High Court refuse to intervene and defend the residents from expulsion, the state may completely or partially demolish the village. Fifteen of the homes that were built after the petition was submitted are especially vulnerable to demolition. The villagers, who live off agriculture, demand that the state allow them to continue building inside the boundaries delineated by Khamaisi’s proposed plan.

From the very outset of the occupation of the West Bank, the Israeli authorities implemented a planning policy that severely restricted Palestinian construction, all while encouraging Israeli settlements, which were allocated vast areas for establishment and expansion. Israel thereby created a situation in which thousands of Palestinians are forced to build illegally. This remains the policy in Area C, under full Israeli control, which comprises approximately 60 percent of the West Bank.

Without an approved plan, the Dkaika’s villagers are resigned to continue building illegally. The same goes for Hamida, the village which Israel hopes to expel Dkaika’s residents to. This means that the villagers will be exposed to forced removal and additional demolitions.

Dkaika is recognized by the Palestinian Authority as an independent village, and includes a school, a mosque, and a cemetery from the Ottoman period. Despite this, the Civil Administration refuses to recognize it as an independent village, claiming that it cannot provide for itself as a “social and geographical entity.” In 2005, the Civil Administration issued demolition orders against a number of structures in Dkaika, including the school, the mosque, and private homes. The legal department of Rabbis for Human Rights (RHR), immediately submitted a petition to the Israeli High Court of Justice against the aforementioned orders.

Since then, RHR have filed four petitions, claiming that the villagers are the only rightful owners of their land and that the Bedouin system supports these claims. RHR explained that residents need a village that is separate and independent from other villages in the area due to their unique culture and customs.