How a drive to the bank can turn into a nightmare, all under the aegis of the Israeli investigative system. 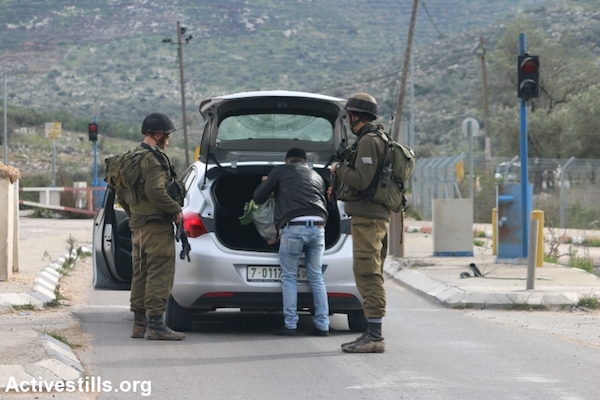 Illustrative photo of Israeli soldiers inspecting a Palestinian-owned vehicle at a checkpoint in the West Bank, January 11, 2016. (Ahmad Al-Bazz/Activestills.org)

It all began with a normal car ride in early January 2016. Zahada Fahdi Awani Tawfiq and his friend, Janem Naal Gamal Harbi Tayb, were driving from East Jerusalem to a-Ram, where Tawfiq withdrew money from his bank account. On their way back, they were stopped at the Israeli army’s Hizma checkpoint. Present were some IDF Military Police officers, Border Police officers, and private security contractors.

A military policeman checked Tawfiq’s ID before allowing him to continue driving. Seconds later, the soldier shouted at him to stop. Tawfiq stopped the car and the soldier walked over to him, demanding to know, “why did you look at the girl?” in reference to one of the female soldiers present. Tawfiq denied looking at her, but the soldier ordered him to pull his car over to the side.

Freeze the frame. An Israeli soldier detains a Palestinian merchant at a checkpoint because, in his opinion, the latter insulted a female soldier – not by deed, not by word, but by a glance. Even were we to accept the ridiculous claim that a glance is enough to permit detention, the one who complained was not the female soldier, but rather a male soldier who apparently felt himself victimized by the alleged insult to her modesty.

A short while after Tawfiq and Tayb were detained, a Border Police officer arrived, took their ID cards and left. He returned several minutes later, ordered Tawfiq to leave the car, and tore a paper document attached to Tayb’s ID’s card. Tawfiq demanded he identify himself but the policeman refused.

Tawfiq asked the policeman what was he doing, and was answered: “you’ll find out soon.” The policeman announced he had to “tear apart the vehicle,” and began throwing its content on the ground – including two Korans, some paperwork, and a booster seat. At this point Tayb tried to call the police, but the Border Police officer snatched the phone out of his hand.

The policeman then ordered the two Palestinians to return the equipment to the car. When they did, the policeman fabricated – or pretended to fabricate – a traffic report against them: he called the regular police, gave the car’s license plate number, and told the officer on the other end of the line to issue them a fine of NIS 500, saying, “the driver confessed.” However, as far as we know no such fine was ever actually issued.

Unexpectedly, at the same time, two of Tawfiq’s nieces stepped off a bus at the checkpoint. He went to talk to them, and according to his testimony, the policeman then jumped on him and began beating him, including with the butt of his rifle. The policeman dragged Tawfiq to the cargo inspection facility, where there are no security cameras, and continued beating him. Then, according to the testimony, the policeman took the bundle of cash Tawfiq withdrew from the bank earlier. He told Tawfiq: If I ever see you again at this checkpoint, I will kill you.

And Tawfiq believed him.

Why did a Border Policeman allow himself to act as a common highwayman? Because he knew nothing would happen to him. We have a legal system, we have courts. Both the cop-turned-highwayman and Tawfiq both know that when it comes to Palestinians, the system exists on paper — nowhere else.

Several days after the incident, Yesh Din lodged a complaint on behalf of Tawfiq and Tayb with Israel’s Department of Internal Police Investigations (Internal Affairs). Let’s just say that if it turns into an indictment, it would be a major surprise. The policeman was not acting alone: there were other policemen present, as well as military police and private security contractors. None of them interfered, even though Tayb spoke to one of the private guards. Tayb called the police as the event unfolded, yet received the vapid response familiar to every Israeli, “come to the station and file a complaint.” He did, actually, but at the precinct they recommended that he contact Internal Affairs.

The Internal Affairs department, housed in Israel’s Justice Ministry, knows, and has known for years, that there is a culture of lies among Israeli police. The former head of Internal Affairs, Herzl Shviro, said so himself (Hebrew). Nor was he the first: the Orr Commission wrote that “the police has a culture of lying and cover-ups” (Hebrew) when it investigated the killing of 13 Palestinians by the Israeli police in October 2000.

Now we are asked by well wishers: why won’t you go Internal Affairs? They forget that Internal Affairs closes some two thirds of its cases without any investigation (Hebrew), and that the success rate of the cases it does investigate is nothing to write home about.

But, Israeli readers, please note: you are the ones paying the policeman’s salary. He is your responsibility. When PID closes his case, it will do so with your complicity. You are the citizens; you own this house. Does this incident shock you? Then act. Flood the PID’s mailbox with letters inquiring about the case. You could also contact a Knesset member from the party you voted for and ask him if he feels safe when a policeman who carried out what is for all intents and purposes a highway robbery still wears the uniform. If something deters Internal Affairs, it’s public exposure.