Just as Israel has banned BDS supporters from entering the country and demonizes those who show dissent, Hillel has sent a message to Jewish students that it only recognizes a certain type of Jew, and sees the rest of us as disposable. 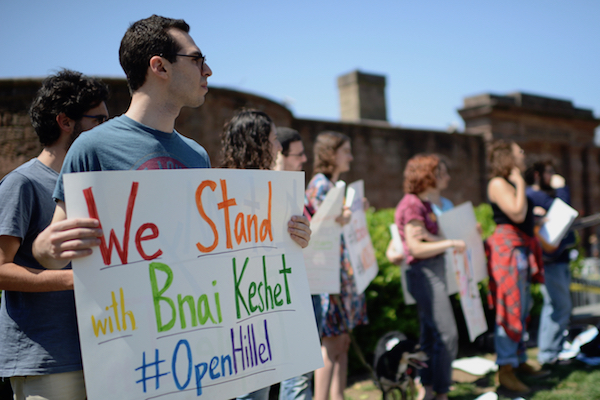 I am exactly the kind of Jew whom Naftali Bennett thinks should not exist. I am a proud, Puerto Rican, feminist, Jewish woman of color who stands in solidarity with Palestine and supports the call for BDS. I am the product of an interfaith and interracial marriage, a strong Ashkenazi mama and an amazing Boricua dad, making me fully Puerto Rican and Jewish, not fractions of either.

I grew up in Aguadilla, Puerto Rico, where I knew very few Jews outside my family. When I began my freshman year at Vassar College in New York state, I immersed myself in the Vassar Jewish Union, our campus Hillel chapter. Having spent my life on an island that faces deep economic and social crises, and which grapples with lack of sovereignty and the legacy of colonization, my gut reaction when hearing about the Palestinian cause differed from that of my Jewish classmates. But luckily for me, in the spring of 2014 — before I arrived — the Vassar Jewish Union (Vassar College Hillel) became one of the first Hillels to officially ‘open’ and drop Hillel International’s exclusionary “Standards of Partnership.”

While I am still often placed on the outside of my Jewish community due to my racial and class-based experiences of Judaism and my political views, my experiences with the VJU have enabled me to access Jewish communal resources and have furthered my commitment to Judaism and open discourse. And I have had the opportunity to learn so much more than I ever could from the narrow view that Hillel International currently promotes.

Throughout my years at Vassar, I’ve learned about Jewish history, religion, and traditions, and formed friendships with Jewish students with a range of experiences and viewpoints. I’ve engaged in some of the hardest and most productive conversations here, right in our Bayit and through the lens of my Jewish identity. I am a leader in my campus chapter of Jewish Voice for Peace, and have worked on campaigns with Students for Justice in Palestine and other student of color-led movements for BDS and Palestinian human rights.

In short, I am deeply engaged with the Jewish community and with Israel/Palestine, and my activism in no way contradicts my Jewish identity; rather, I know that I am acting on my Jewish values.

Yet mine is not the kind of engagement that Israeli Education Minister Naftali Bennett and other Hillel mega-donors want to see. Bennett recently launched “Mosaic United,” a $66 million “Jewish engagement” and “identity-building” program focused on the Jewish diaspora. Mosaic aims to combat “critical discourse” on Israel and to promote a sexist, homophobic, and anti-interfaith vision of the Jewish family. By partnering with Mosaic, Hillel has chosen to marginalize and silence Jewish students like me. 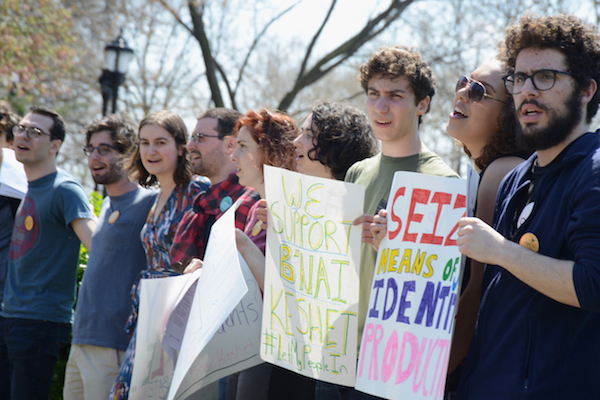 Working with Mosaic has worsened Hillel’s policies of exclusion. Most recently, under pressure from Hillel International, Ohio State Hillel (which received a $73,000 grant from Mosaic United) expelled B’nai Keshet, Ohio State’s Jewish queer group, for partnering with Jewish Voice for Peace on a fundraiser for LGBTQ refugees. OSU Hillel cited Hillel International’s Standards of Partnership in justifying its decision to punish students for supporting refugees and oust LGBTQ Jewish students from the campus Jewish community.

In response to these exclusionary policies and practices, during the Pesach holiday of liberation, I helped lead an Open Hillel rally in New York in solidarity with B’nai Keshet. We called on OSU Hillel and Hillel International to re-admit B’nai Keshet, drop the Standards of Partnership and reject Mosaic United and Naftali Bennett’s money and influence.

When Hillel places allegiance to Israel and its donors above engaging with the most pressing social justice issues of our time — whether refugee rights, Black Lives Matter, or the movement for LGBTQ equality — it leaves behind too many people in the Jewish community. Most importantly, it leaves behind Jews with identities that make those movements just as personal to them as anything within the Jewish community.

Naftali Bennett sees pluralism, diversity, and open debate as signs of the degeneration of the Jewish community. Yet I and all of us at Open Hillel know that our diversity ensures the Jewish community’s vibrancy and strength. We cannot allow ourselves to remain stagnant and close-minded. We are all a part of a living, breathing, dialoguing and disagreeing community, and we all belong at the Seder table.

Ally Fernandez is a junior at Vassar College studying English and Latin American Studies. She plans on attending graduate school and working towards a career in higher education and public service. In the meantime, she likes to organize, drink coffee, and spend time on the beach with her family when she’s home.