I posted this item on my old blog a couple of years ago. I wanted to share it with 972’s readers as well

April 24, 2009 – Tuesday was Holocaust Remembrance Day in Israel, and my sister visited the Yad Vashem site to go through the names of our relatives who died during the war. Yad Vashem’s database of the Holocaust’s victims has over 3 million names in it – about half the total number of Jews murdered by the Nazis.

Surprisingly enough, when she typed the name of my grandfather, Henri Fogelman, he was listed among the French Jews who were murdered in Auschwitz. The full entry goes:

Henri Fogelman was born in Radom in 1923. During the war he was deported with Transport 48 from Drancy to Auschwitz on 13/02/1943. Henri perished in the Shoah. This information is based on a list of deportations from France found in the Le Memorial de la deportation des juifs de France, Beate et Serge Klarsfeld, Paris 1978.

Reading this still gives me the chills.

All the details in the Yad Vashem database are accurate, except one: my grandfather didn’t make it to the death camp – he jumped from the train somewhere along the way. In fact, he was deported again to Auschwitz, and again he managed to escape. Later on, he came to Israel to fight in the 48′ war, where he met my grandmother. The marriage didn’t work out, and after a few years Henri went back to live in Argenteuil, a northwestern suburb of Paris. He died in 2000. Here is a picture of him with my grandmother in one of his visits to Israel. 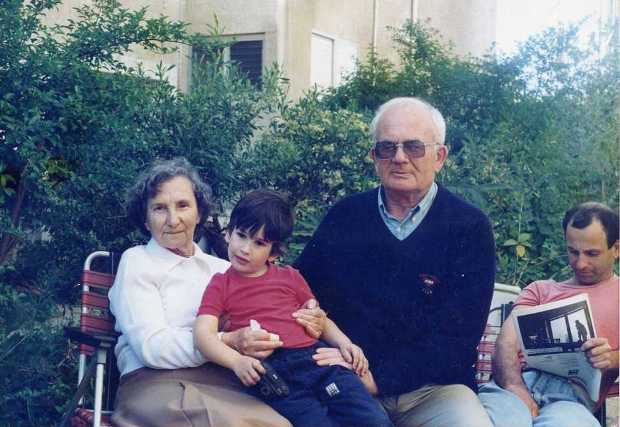 As it turned out, my mother contacted Yad Vashem sometime ago and pointed out the mistake. She was asked to present proof that her father did in fact escape from transport 48.

Apparently, that wasn’t enough, and she gave up on the whole thing.

I don’t know what my grandfather would have thought about his name appearing among the other family members who were murdered in Auschwitz. As for me, I kind of prefer the entry to stay as it is. The Holocaust had some sort of a “happy ending” for us: my grandfather survived, and so did his older brother Albert, who passed away in 2003. But the truth is, the Holocaust had no happy endings, and I wonder what is left for a person who lost so many members of his family, jumped from two trains heading to Auschwitz and spent the rest of the war hiding in the snow and in the woods. What did he leave behind him when he returned from Poland to France? and to what extent did he really survive? 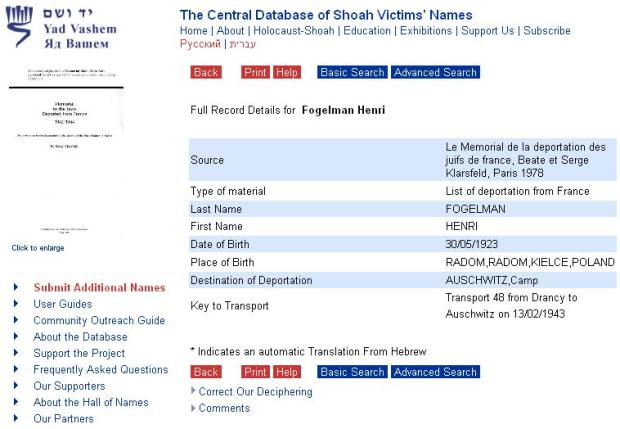 Update, 2011 – Since I wrote this post, I have received a couple of interesting e-mails: the first was a from a distant family member from Canada that I’ve never heard of, and the other from an Australian woman whose relatives were on the same transport to Auschwitz. They didn’t survive.

Judy, the Australian, also sent me this page, which was part of the passengers’ list from transport #48. 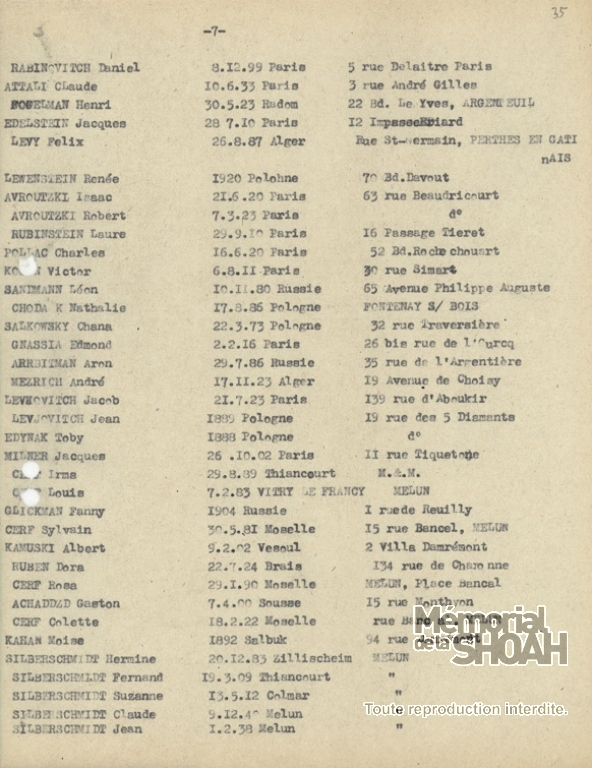 List of passangers on transport 48 from Drancy to Auschwitz