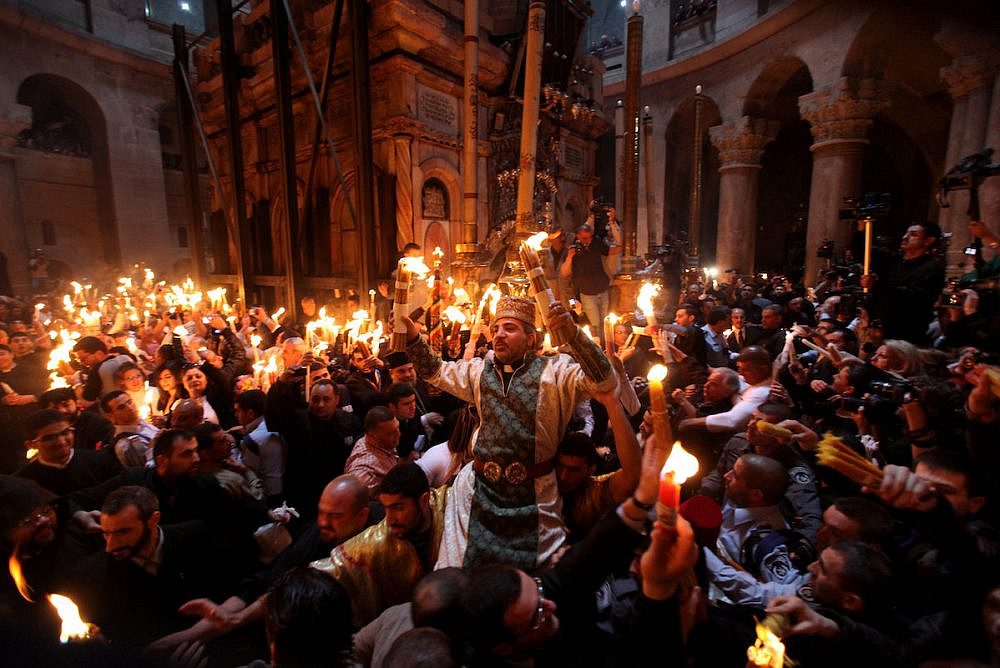 Orthodox Christian worshippers take part in the Holy Fire ceremony at the Church of the Holy Sepulchre in Jerusalem's Old City during the Easter holiday, April 23, 2011. (Kobi Gideon /Flash90)

Every year on the eve of Eastern Orthodox Easter, the Church of the Holy Sepulchre in Jerusalem, revered as the site where Jesus was crucified and resurrected, overflows with thousands of worshippers. They wait on their feet for three, sometimes four hours to witness the miracle of the Holy Fire, which, according to Orthodox tradition, appears from Christ’s tomb.

A 19th century painting of the event by William Holman Hunt mirrors a scene captured in a new documentary by Brittany Browning and her brother, Reuben. Once the fire descends from heaven, goes the tradition, it is brought out of the tomb by the Greek Orthodox Patriarch of Jerusalem, and within seconds, the flame travels across a crush of bodies to the sounds of church bells and people proclaiming, “Christ is risen.”

Worshippers have been marking Holy Saturday this way for centuries — until this year. Due to the novel coronavirus, the Church of the Holy Sepulchre, known also as the Church of the Resurrection, has been closed to visitors. The ceremony, which falls on April 18, will therefore only be attended by eight clergymen belonging to the Greek Orthodox, Armenian, Assyrian, and Coptic denominations.

The church was last shut down for three days in 2018 to protest a bill that would have allowed Israel to expropriate church land sold to private real estate firms. The government had proposed the bill around the same time that the Jerusalem municipality said it would cancel a tax exemption for church-owned commercial properties in the city, which has also been suspended since.

But according to religious leaders and residents of Jerusalem’s Old City, where the Church is located, this closure on Easter is unprecedented. “I can’t remember anything in the church’s history that compares to the situation today,” said Father Constantine Nassar of the Greek Orthodox Saint George’s Church in Jaffa. “There were periods of renovations, there was a fire at one point, but not a closure at this level.”

The ceremony itself will nonetheless carry on as usual, explained Nassar, and will be broadcast for the world on live television. As tradition dictates, the Greek Orthodox Patriarch of Jerusalem will lead the event. “There’s an order to this, almost like a law,” said Nassar.

The patriarch circles the tomb three times before taking off his decorated robes, including any jewelry, as a symbolic act of shedding his status and entering the tomb in humility, described Nassar. He is then searched for matches or other tools that could light a fire — and the tomb is inspected as well — as a guarantee to worshippers that it indeed descends from heaven. When the patriarch is deep in prayer inside the tomb, that’s when worshippers believe the miracle happens.

This custom, known as Sabt al-Nour in Arabic, or “the Saturday of Light,” celebrates the first sign of Christ’s resurrection, explained Nassar. “The Holy Fire represents Christ’s triumph over death, that He is risen and death has been conquered.” 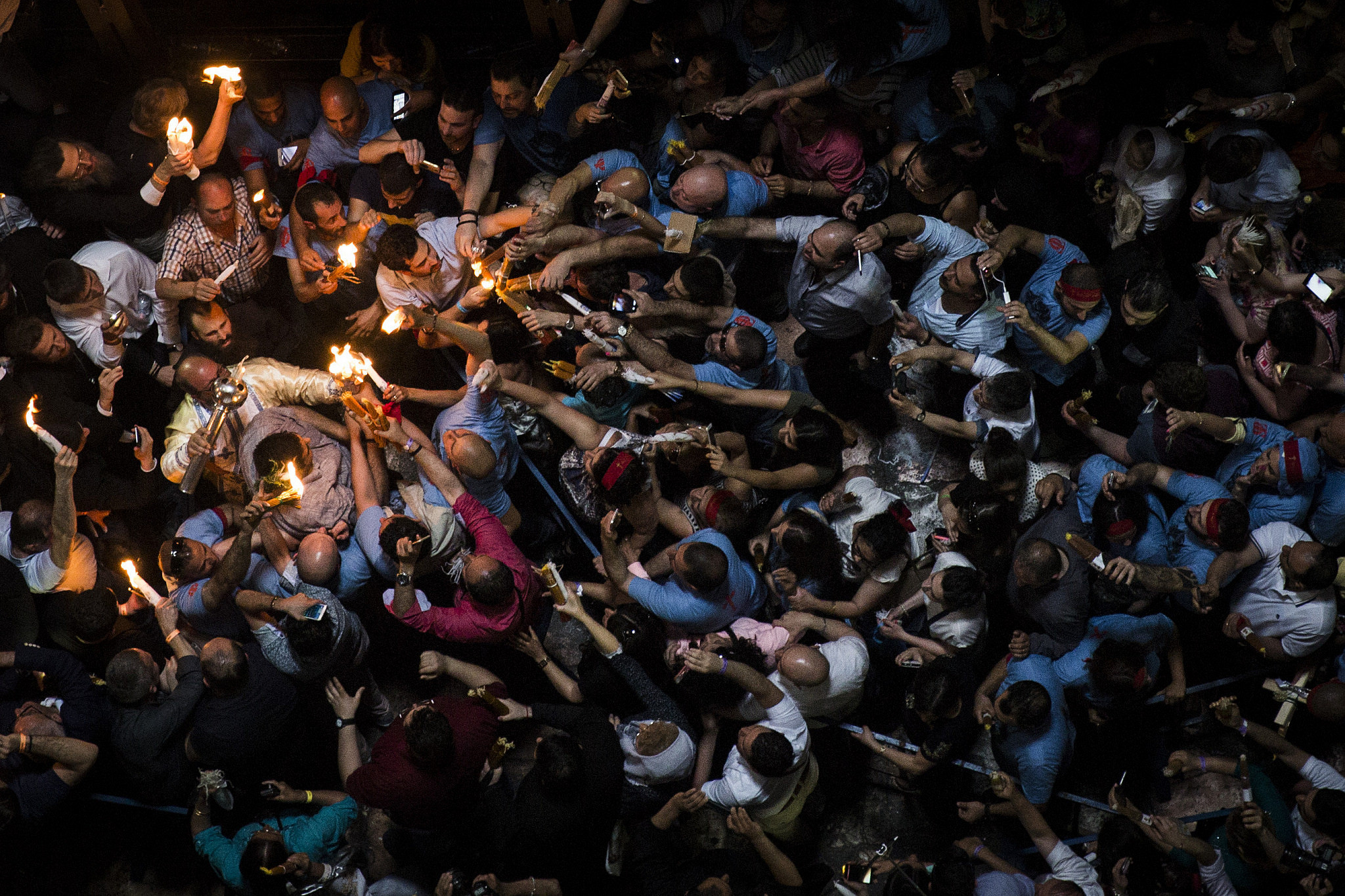 Orthodox Christian worshippers take part in the Holy Fire ceremony at the Church of the Holy Sepulchre in Jerusalem’s Old City during the Easter holiday, April 30, 2016. (Hadas Parush/Flash90)

To Louay Said, the co-founder and director of Seeds of a Better Life, a Jerusalem-based nonprofit that organizes community events for Palestinian Christians in the city, “the Holy Fire is a whole other level of faith.” He recalled walking in the Old City after the ceremony last year when suddenly one of the candles he was holding lit up on its own. “It’s an indescribable feeling,” he said. Some years ago, a pilgrim hoped to attend the event at the Church of the Resurrection, but couldn’t get past the Old City’s Damascus Gate, continued Said. Instead, she watched the ceremony on big screens outside. When the fire appeared, she touched the screen with her own candle, and it lit up.

“I think the devout really believe that it [the fire] is from God, and the cynical think that the priest takes something in there and lights it,” said Browning, one of the “Holy Fire” film producers. “At the end of the day, it doesn’t matter so much because it brings meaning to people.”

For Browning, witnessing the event felt exhilarating, “like an adrenaline rush,” she said. But it was also terrifying: “I think it’s just about there being a big crowd, and fire, and one exit.”

One of the reasons for making the film was to share this centuries-old experience with people from Western Christian traditions who are mostly unfamiliar with it, she said. The 27-minute documentary was released on Amazon in the first week of April — earlier than planned, explained Browning, after travel restrictions prevented people from flying in to visit Jerusalem or see the church in person. “It wasn’t our intention, really, but for a time like this where people feel isolated and alone and disconnected, I think it’s a really powerful symbol,” she said.

Travel constraints, however, will not prevent the flame from being transported to countries around the world, confirmed Akiva Tor, head of the Bureau for World Jewish Affairs and World Religions at Israel’s Foreign Ministry. A Greek Orthodox bishop will deliver it to representatives of 11 countries who will be waiting at the Old City’s Jaffa Gate, including Russia, Ukraine, Greece, Georgia, Cyprus, Kazakhstan, Moldova, Belarus, Poland, Romania, and Uzbekistan. The delegates will then transfer the fire to crew members in aircrafts at Ben Gurion Airport, he said.

The Greek Orthodox Patriarchate will also transport the flame to the occupied Palestinian territories and Jordan, according to Tor. But the plan for its delivery across Israel-Palestine is not as clear.

Based on an arrangement between Israel Police and the Patriarchate, youth with the Seeds of a Better Life organization will bring the fire to homes inside the Old City, explained Said. To prevent large gatherings and violations of Health Ministry precautions, in lieu of the annual parade, the group is planning a small zaffeh, a musical procession, with residents climbing on to their roofs with drums and tambourines, he added. 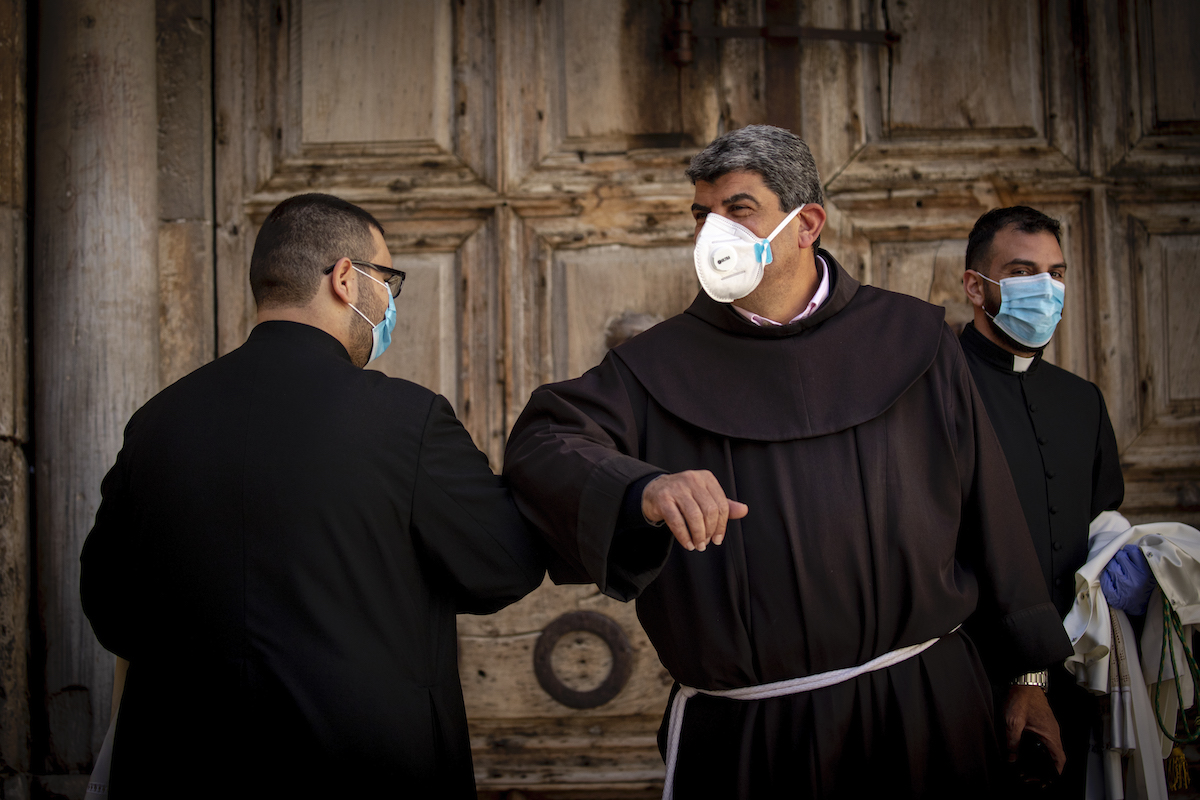 Monks wearing face masks and gloves salute each other outside the Church of the Holy Sepulchre which was closed due to the coronavirus, in Jerusalem’s Old City, on April 4, 2020. (Olivier Fitoussi/Flash90)

“I’ve been attending Sabt al-Nour my whole life, but this is the first time I’ve experienced such a thing,” reflected Said. Usually, a group of at least 300 or 400 people take part in the Saturday march alone. “Everyone is sad that they can’t celebrate the holiday as usual. But this is no joke. We’re talking about a deadly virus.”

The Greek Orthodox Scouts of Jerusalem will take the flame outside the Old City to the Beit Hanina and Beit Safafa neighborhoods in the Eastern part of the city, continued Said. They also plan to transfer it to West Bank communities by driving to meet representatives of the Greek Orthodox scouts at various checkpoints. But all these plans might get canceled, he said, depending on new developments.

Normally, Christian Palestinians in the occupied territories who live only hours away from the holy city have to apply for a permit with the Israeli army to travel for the holiday. A quota of permits is granted according to an arbitrary set of criteria, which the army justifies as security requirements.

Father Nassar said he intends on driving to Jerusalem on Saturday to bring the flame to Jaffa, but is unsure whether new security restrictions will prevent him from doing so. “We’ve been hearing about new precautions every day. We’re told one thing in the morning then read about something else come evening,” he said.

The Jaffa Greek Orthodox Scouts Club, which delivers the Holy Fire to homes across the city every year, filed for a permit with the police to maintain the tradition this year as well, but the request was rejected, explained Nassar. “Maybe by Saturday we’ll find another way,” he said.

The scouts will be handing out food packages to families in need, and perhaps that network can be used to simultaneously spread the flame, he suggested, while stressing that the operation will abide by the health restrictions in place. “We don’t want to do anything against the law, or position our youth in harm’s way, if they get questioned or fined by police.”