Israel demolishes 235 Palestinian structures in the West Bank in February — the highest monthly total for at least seven years. 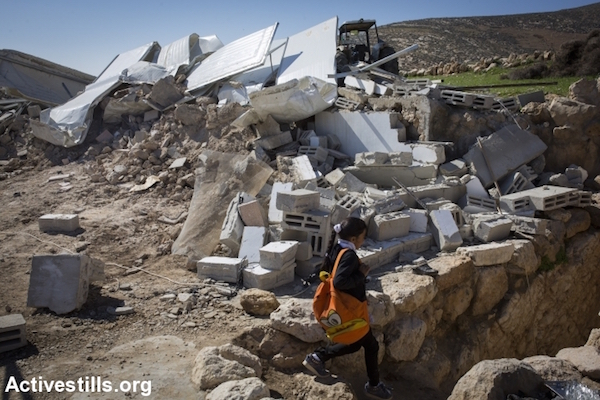 A Palestinian girl walks back from school to her demolished home after it was torn down by Israeli bulldozers in the village of Khirbet al-Halawah in firing zone 918, which includes several villages, south of Hebron, West Bank, February 3, 2016. (photo: Activestills.org)

Israeli forces demolished 235 Palestinian-owned structures in the West Bank in February, according to the UN’s humanitarian agency, the highest such figure since it started keeping record in 2009.

In all, UN OCHA confirmed to +972 Magazine, the demolitions displaced 331 Palestinians, including 174 children, and otherwise affected a further 740 Palestinians.

March began as February ended, with Israel demolishing 41 structures in Khirbet Tana, located southeast of Nablus in the West Bank, displacing 36 people including 11 children. The destroyed structures included 12 provided by the Palestinian Red Crescent and the Palestinian Authority as humanitarian assistance, as well as an elementary school, according to an OCHA statement released on Friday.

In total, the Civil Administration — the Israeli military’s governing arm in the West Bank — has demolished at least 323 structures so far in 2016, over three-quarters of the number of Palestinian structures in the West Bank it demolished in all of 2015. The overwhelming majority of these demolitions were carried out due to a lack of building permits.

Particularly affected have been Palestinian communities in the South Hebron Hills, the Jordan Valley and the E1 area around Ma’ale Adumim. The intensive rate of demolitions since the start of the year is in marked contrast to a relative lull at the end of 2015, which itself followed several waves of mass demolitions throughout last summer.

The Israeli government argues that such demolitions are ordered and carried out because the structures were built without permission, but between 2010 and 2014 only 1.5 percent of permit requests by Palestinians in the West Bank were approved.