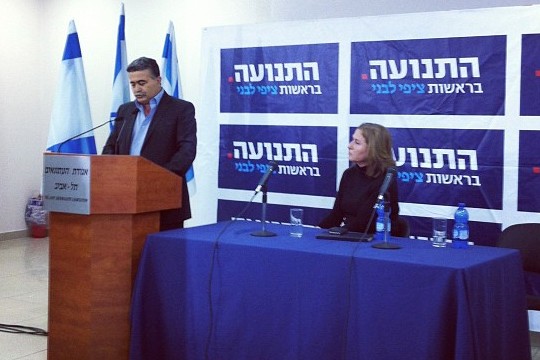 Former defense minister and Labor leader Amir Peretz announced today that he will be leaving his party and joining Hatnua, the new party formed by Tzipi Livni. Peretz, who criticized current party leader Shelly Yachimovich for not having any diplomatic agenda, will be placed third on the new party’s list – exactly the spot he held on Labor’s list. This move – made just before the parties had to submit their final lists to the election committee – concluded a strange couple of weeks, in which Dan Meridor and Benny Begin were thrown out of the Likud, Ehud Barak retired from politics, Livni returned, Avigdor Lieberman got rid of his deputy Danny Ayalon, and Labor lost two of its former chairmen (the other one being Amram Mitzna – Livni’s number two in the coming elections).

All parties need to submit their list of candidates by 10 p.m. this evening. As of then, parties cannot add members or change the order of the list, so the horse trading ends by law.

1. Almost all the recent moves happened among “center-left” parties (Labor, Kadima, Atzmaut, Lapid’s party and Livni’s party). What was once Israel’s ruling ideological and political force – liberal Zionism – is now a fragmented, incoherent, decaying elite, with less influence than ever and fierce competition over the few remaining positions of relative power. One or two of those centrist factions will probably enter the next government, as a third wheel to Israel’s new elite: a nationalist, pro-settlement bloc. They won’t have much influence, and the government’s policies will be determined more by local and international circumstances.

2. The reason those centrist parties didn’t unite as some of their supporters had hoped or expected is not so much due to their ideological differences, but the silent recognition that there is no chance of winning the current elections. The problem is not the fact that one party mentions the peace process and the other doesn’t, but rather that they are all heading for a loss.

Our poll-tracking page has yet to show one poll in which Netanyahu’s right-Orthodox coalition doesn’t enjoy a clear Knesset majority. The politicians understand that, and they are aiming to position themselves better for the day after Netanyahu’s win. If they thought the center-left had a fair chance of winning, they would have joined hands, formed a new government and split the goods among themselves. But since Netanyahu is going to be the next prime minister, it’s better for each one of them to serve as the leader or the deputy of his or her own party, in the hopes that when the right moment comes, he or she could become the leader of the entire bloc. The problem is that demographic and ideological trends suggest this opportunity may never arrive.

3. The maneuvers in the right also have to do with the day after elections. Avigdor Lieberman has ousted all the MKs and ministers who have embarrassed him or given the party bad press. He is clearly trying to re-brand himself as a new moderate, and some people are already falling for it (too easily, I might add). Lieberman agreed to the joint ticket with Likud only in order to become the next party leader. His main rival in house will be Moshe Ya’alon, the former IDF chief of staff, who is likely to become the next defense minister. Ya’alon is a right-wing ideologue who can make Netanyahu appear moderate; Lieberman wants to position himself to his left. It’s a good tactic, but we should remember that neither of them – nor Netanyahu – is really a moderate of any kind. Naftali Bennett, the rising star of the settler movement and the leader of the National Religious Party, will challenge the Likud from the right, also in an effort to build a name for himself as the leader of the hard right.

4. This is endgame. The right will win the elections, and what will follow will be an ugly rush of “centrist” politicians to join the new government. The next Knesset will be worse than the current one. The process is completed. The tipping point, it seems, was a decade and a half ago, perhaps in the 1996 elections which saw Netanyahu win for the first time. We are not witnessing a change, but the outcome of something that happened long ago – maybe in the decision not to evacuate the Hebron settlement in 1968. A new nationalist-religious elite has taken over the executive and the legislative branches, as well as the military; soon it will have the courts and the media. It is a Tea Party with one of the world’s largest armies at its service. The so-called alternative (was there ever one?) is non-existent, many of its leaders have given up the fight and retired, others are forming a discourse that all but ignores the occupation and regional developments, focusing instead on short-term political goals. The existential crisis this country is facing is not likely to be resolved from within.