There is no possibility that Israel’s Civil Administration will fairly and properly plan for Palestinians in Area C if they are not at the table when their fate is decided. 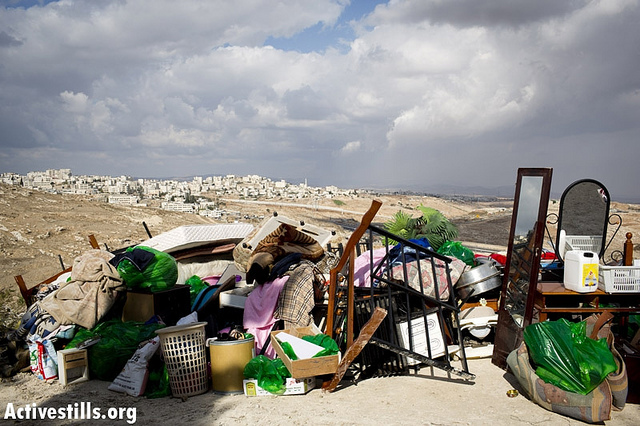 The belongings of the Aramin family is seem after the Jerusalem municipality demolished their house, in the village of At-Tur, East Jerusalem, November 13, 2012 (photo: Oren Ziv / Activestills)

Last Thursday, the bulldozers demolished Beit Arabiya, for the sixth time. On Wednesday, two homes were demolished in Dirat, a village that is appealing with Rabbis for Human Rights (RHR) to the High Court against discriminatory planning in Area C. Additional homes and structures were demolished over the past week in Al-Waya, A-Tur, Ein al Hilwe, Ibziq, Nabi Samuel, Hares and more. The only crime of the Shawamreh family is that, after having spent great sums of money and taken every possible measure to get a legal building permit, they have been forced to build without a permit. There is no legitimate planning, security or other reason whatsoever for not granting the permit.  The only reason is that the Israeli army, which has sole control over planning for Palestinians in Area C (60% of the West Bank), makes it almost impossible for Palestinians to get a building permit there.

Demolitions continue while there is a High Court petition pending hearing – a petition that will raise  arguments about the patently obvious discrimination, the axiomatic principle that people must have a say in the procedures and decisions that so drastically impact on their lives (and we will prove just how devastating that impact is). From both a human rights and from a Jewish perspective, it is hard to think of a more justified appeal.

But, the real reason is the bulldozers. When I will walk into the courtroom the faces of Salim, Arabiyah and their children will be like frontlets before my eyes.

And they won’t be the only faces. The midrash to the week’s Torah portion in the time of the demolitions teaches us of the toll that trauma takes. We are taught that Sarah dies of a heart attack after she finds out that Abraham almost sacrificed their son. Of all the terrible things I have seen in my 17 years with Rabbis for Human Rights (RHR), nothing quite matched the sight of a child coming home from school to discover that his/her home has been demolished. S/he had a home when s/he went off in the morning, and now there is rubble. I have seen all too many times how more than just the physical home is demolished. Families are demolished. I will never forget the fearful families literally sitting on suitcases, and looking out the window every morning. Maybe this is the day that their home will be surrounded by soldiers and the bulldozer is approaching. I will never forget the six-year-old child asking his parents, “If they come to demolish our home again, do you think we could save my bicycle?” To this day I have post traumatic flashbacks whenever I hear a pneumatic drill.

Two of the founding rabbis of RHR, Rabbis Rabbi Ben Hollander and Max Warschawski were there when the Shawamre home was demolished for the first time. Rabbi Hollander said that watching the home being demolished was one of the worst days of his life (and helping to rebuild one of the best).  Rabbi Warschawski’s daughters frantically tried to move him as the bullets flew around him. He wouldn’t budge, and simply said “This is where I need to be.” Over the years our board has had many serious debates about civil disobedience. At one such meeting Rabbi David Forman said that “In general, civil disobedience requires prior authorization. However, the policy of administrative home demolitions was so evil that no prior authorization should be required.”

In 2004, when we founded our Occupied Territories Legal Department, we understood that we couldn’t stop the demolitions simply by standing in front of bulldozers or by legally defending individual homes. The problem is systematic –  exploitation of the fact that Palestinians are not represented in the Knesset, the army, the courts or the planning committees that “legally” create a situation in which it is almost impossible to get a building permit.

At the outset our goal was to reform the Civil Administration – the army body responsible for planning in Area C. However, we came to the conclusion that, as Rabbi Shimshon Raphael Hirsch wrote, allowing those with power to decide how to best act justly towards the voiceless “borders on criminality.” In one meeting, a senior civil administration official, Shlomo Moskovitch, acknowledged that they don’t have the capability to plan for Palestinians. There is no possibility that the Civil Administration will fairly and properly plan for Palestinians who are simply not at the table when their fate is decided.