The race is on to de-legitimize the housing protestors this week, a group of youngsters camped out on Rothschild Boulevard angry about the high cost of housing. Rothschild is the tony downtown of Tel Aviv, which was renovated some years ago, and now apartments there net a pretty penny. The renovation also made it into a social hub for the whole city, with inviting cafes, benches, fountains and periodic art installations. When I moved here, it was full of sand and flies. I quite like the change, even though I recognize that I could never afford to live there.

Maariv columnist Ben-Dror Yemini on radio Reshet B on Sunday accused the media of paying disproportionate attention to the Rothschild housing protest while totally ignoring the “Bread” protestors over ten years ago in Tel Aviv’s Kikar Hamedina (at the time, home to the highest-priced real estate in the country). He implied that today’s protestors reflect the natural sentiments of the press, hence the coverage. What he meant: the housing protestors are bourgeoisie, Ashkenazi and left-wing. 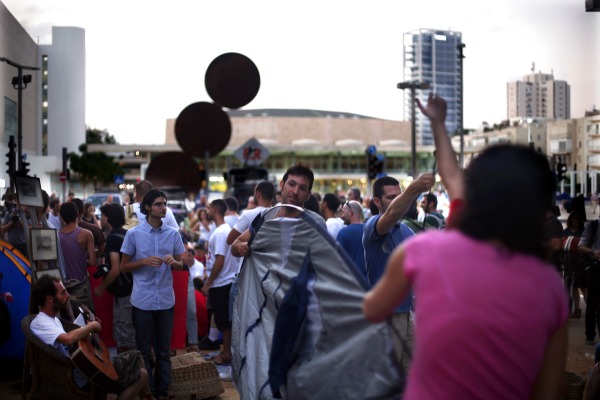 Miri Regev, the MK from Likud spat out that they were a bunch of radical leftists, because they booed her.  It couldn’t possibly be that since the survey she initiated showed deep distress with the housing situation over a year and a half ago, little has changed.

This is the bon-ton – just accuse protestors of being left-wing and everything else will go away. Ironically, when I tried to interview a woman at the protest, she began to say that she came because she hopes Israelis will see the connection between the occupation and economic woes – but bit her tongue in the middle and asked me to please find someone else to interview. “They don’t want to be associated with the radical left.”

We’ve reached an absurd situation of post-modern political non-politicization. The right hopes to annul the message of the protestors by smearing them as left. The protestors hope to avoid the smear, by refusing to say anything of substance at all.

As a result, the message of the protestors, if there is one, has been embarrassingly muddled. Are they asking the government to intervene to control rental prices? Are they proposing new policies, philosophies or ideas that have been painstakingly thought through by economic experts to increase the housing supply and shift to a fairer socio-economic system? Are they demanding that the government raise minimum wage? Are they even protesting against the government, or rather against owners of apartments, who charge the killer rents? 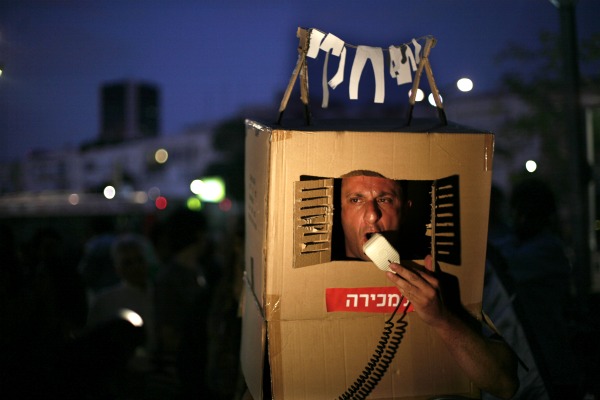 It seems like the state, generally, is the target – and I have to say that the amoeba-shaped demand for the government to “do something,” with no systematic thinking or policy in evidence makes me think they just want a full-sweep government takeover of the housing market. Having spent lots of time in former communist countries with their vast stretches of hideous, crumbling, housing blocs lining filthy streets, that theme of the protest makes me a bit nervous.

But it’s hard to tell. Nearly everyone I spoke to, including several of the core activists, said that it’s not their responsibility to offer solutions; on Monday their representatives went to a Knesset committee meeting and said the same thing. One told me they are not targeting the political leadership in particular, because this is not about politics. Also on Monday, organizers actually canceled a planned  satellite protest in Herzliya because politicians wanted to show up. An organizer, interviewed on IDF radio on Sunday, said that the protest was about the fact that the “wild market makes the prices wild.” Huh? 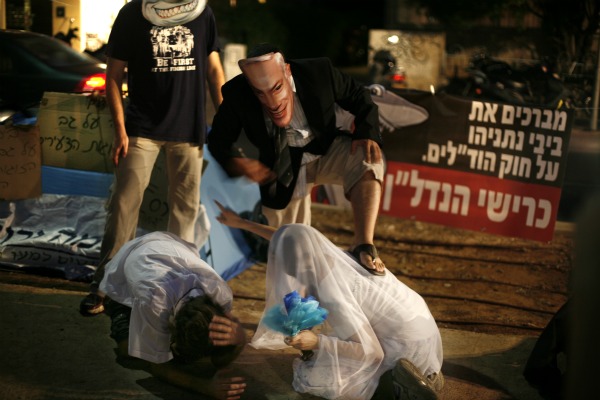 Maybe there’s something to the charge that the protestors are sympathetic to the left. Nitzan Horowitz of Meretz sat with them at the beginning and was not booed; nor was Dov Khenin of Hadash.

Maybe the left, right, center, middle class and upper class and lower class, Ashkenazim and Mizrahim must finally accept something that may seem tragic for them: the housing protestors accept politicians that they know have devoted their lives to social justice.

I’m sorry if Israelis don’t like it but here’s the reality: left-wing politicians care more for social justice, for the weak and the weary and the unrepresented, than the right – in rhetoric and in policy. They care more about a fair social economic system that accepts a free market but supports moral, economic, humane limitations.  If the left is also coincidentally anti-occupation, maybe it’s no coincidence but a genuine understanding that true social and economic justice will not be attained inside Israel or outside, until the occupation is over.

I wish Israeli society would realize that they can hate the word “left” all they want, but these are the people who have sacrificed political power, seats in government, the unholy riches born of the alliance between politics and business, to keep fighting for social justice.

I wish the protestors would stop this cowardly avoidance of politics and do their homework. They should look up the record of legislation and voting for each MK and call on those who reflect their needs to join their struggle, without blinking at the superficial political branding of a meaningless “left-right” smear debate.

I call upon the protestors: Define your target, propose some policies. Call on the state if you have a clear vision, but show your anger at landlords too. Break your leases, boycott the rental market; refuse to sign exploitative contracts; move in together. Learn the laws and read this excellent report by ACRI on tenants’ rights and comparative policy options (something tells me they haven’t); work together with the Association for Housing Culture and the Ministry of Housing.

But don’t just sit there on Rothschild blocking my way, taking up the newspaper headlines, and yell. 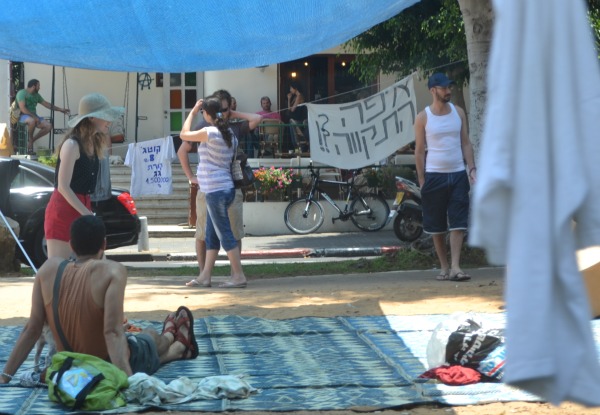 What exactly is it that they want? Sign saying “Where’s the hope?” at the housing protest on Rothschild Boulevard, Tel Aviv, 15 July, 2011 (Photo: Dahlia Scheindlin)

*Updated: In an earlier version, this post referred to Maariv’s Ben-Dror Yemini as “right wing.” Mr. Yemini asked to clarify that he is not “right wing,” and the comment has been corrected.