Israel’s nearly unprecedented announcement and subsequent ‘review’ of plans for 24,000 new settlement units was actually a win-win situation – for everyone but the Palestinians, of course. 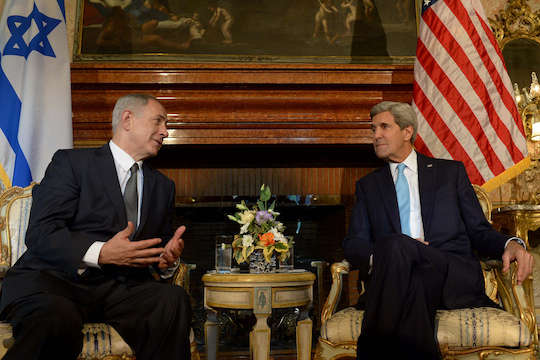 Israeli Prime Minister Benjamin Netanyahu was outflanked from the right on Tuesday, purportedly surprised by an announcement of 24,000 – yeah, you read that right – new settlement housing units in the West Bank.

Immediately following the first report of the unprecedented settlement expansion, Netanyahu announced he would block construction in E-1, one of the West’s least favorite proposed settlement plans. Some eight hours later, he publicly reprimanded his housing minister, denied having advanced knowledge of the plans and said they would be “reconsidered” – but not canceled.

The initial announcement drew immediate criticism and, coming as it did on the heels of one of Washington’s harshest condemnations of Israeli settlement building in recent memory, increased the risk of what appeared to be a quickly deepening crisis brewing between Israel and the United States.

Part of that crisis was driven by the Israeli government throwing a diplomatic temper tantrum over what it fears is a bad deal between the P5+1 states and Iran over the latter’s alleged nuclear arms program.

Fully aware of the situation’s complexities considering the goal of Israel’s primary diplomatic push on Iran, Palestinian negotiators mocked their Israeli and American counterparts on Tuesday, acquisitioning the language they have been using surrounding the Iran talks.

“All options are open,” chief Palestinian negotiator Saeb Erekat said in response to the Israeli settlement announcement, clearly mocking the regular assurances Washington makes to Israel, repeating ad nauseam that “all options are on the table.”

Another Palestinian negotiator and fellow Oslo veteran, Mohammad Shtayyeh, made even clearer use of Washington’s growing bank of Iran-related sound bites. “We believe that it is better not to reach a deal than to reach a bad deal,” he said, responding to the latest of Israeli settlement building announcements. Washington has repeatedly used the phrase to reassure Israel that it won’t make a “bad deal” with Iran.

And maybe it is smart that the Palestinians started using the language of Iran nuclear talks. After all, they’re all Netanyahu can talk about lately.

In his condemnation of the 24,000 planned settlement units, Israel’s prime minister didn’t once mention Palestinians or the peace talks. Instead, Netanyahu explained that announcing one of the largest-ever tenders for new settlement construction “creates an unnecessary confrontation with the international community at a time when we are making an effort to persuade elements in the international community to reach a better deal with Iran.”

And it’s pretty likely that Netanyahu is telling the truth when he says he was unaware of the latest announcement ahead of time.

Housing Minister Uri Ariel, himself a settler, is at least bureaucratically responsible for the latest announcement. Ariel is a senior member of Naftali Bennett’s Jewish Home party, which firmly opposes a two-state solution and advocates annexing the majority of the West Bank. Bennett in the past has said that he has no problem with Netanyahu’s peace process, because he is certain it will fail.

What if he, or more likely, someone in his party, decided to try and ensure that the talks fail, to make Netanyahu look bad in front of the Americans and Palestinians and to fire a warning shot, reminding the prime minister that strong elements in his own party oppose the peace process and two-state solution.

The other possibility is that Netanyahu’s public about-face was calculated and not reactionary.

Last week, Secretary of State Kerry said – in a joint interview with Israeli and Palestinian television – that Israel’s continued construction of settlements on land that will eventually be Palestine, “sends a message that somehow perhaps you’re not really serious.”

So how could he save face and broadcast to the world that he is indeed“serious?” By stopping the largest planned settlement growth of the decade. And the best part – nobody loses but the Palestinians.

The Israeli Right doesn’t actually lose anything because Netanyahu didn’t order that the settlement building be canceled. The only thing he objected to, actually, was the timing of the announcement. The prime minister, who was called out by Kerry last week, in turn gets to reprimand his housing minister for announcing the settlement plans while the world’s attention is on Israel. The “reconsideration” that he demanded, relates only to the timing and size of the announcement. The same plans will be open for bidding again soon, only announced more quietly and in smaller numbers.

Naftali Bennett’s Jewish Home party also saves face. Under increasing pressure for sitting in a government that is – at least in theory – negotiating away chunks of the Land of Israel, Jewish Home can now show its supporters that it hasn’t abandoned its ideology and will continue pushing to expand Israel’s grip on what it swears will never be Palestine.

The Americans are in a bind, but they too come out on top. Kerry had his tough words for Netanyahu, both about Iran and about Palestine, and voila – it worked. State Department spokeswoman Jen Psaki played into the possibility that Netanyahu was outflanked by his own, shortly before Netanyahu issued his “reversal,” noting that these types of settlement announcements aren’t always in the prime minister’s control.

But anyone who hoped Kerry’s harsh words about settlements last week were the beginning of a tougher American stance against the settlements will likely be disappointed. “I don’t think we’ve been shy about our disapproval of settlements, so we’ve called them illegitimate,” Psaki said, repeating the same tempered and seemingly exhausted language Washington has used for years. “We want to move forward.”

Or rather: nothing to see here. Move along.

Related:
U.S., Israel break not only on Iran, but on Palestine, too
Kerry denies existence of ‘prisoners for settlements’ deal