On his way to the finale of one of the most important shows in the Arab world, Haitham Khalailah had to deal with the Shin Bet, restrictions on the movement of Palestinian citizens and the fraught connection between Palestinians in Israel and the rest of the Middle East. Will he be the second Palestinian in a row to be crowned winner?

By Yael Marom and Henriette Chacar

Haitham Khalailah, a 24-year-old Palestinian singer from Majd al-Krum, competed Friday night in the finale of Arab Idol – the most popular singing competition in the entire Arab world. Hundreds of millions of viewers will have to decide by Saturday night whether Khalailah — who was able to unite Palestinians in the occupied territories, Israel and around the world — should win. The other two finalists are Hazem al-Sharif of Syria and Majd al-Madani from Saudi Arabia.

Haitham sang two songs in the semifinals, the first of which was Saber Ruba’i’s “Ahla Nisaa al-Dunia” (“The most beautiful women in the world”), followed by “‘Ala Dal’ona,” one of the most important and well-known Palestinian folk songs, which had the entire studio audience on their feet.

Khalailah began his Arab Idol journey alongside Manal Moussa, another contestant from the north who caused quite a bit of controversy and was subsequently voted off in the quarterfinals. Moussa took a different approach than Khalailah, and succeeded in angering just about everyone.

Moussa started off strong, and seemed like she had a very good chance of reaching the finals. But something happened along the way, likely due to her political, pro-Palestinian rhetoric – which may have been used to get more votes – and the rhetoric of her family members, which contradicted her stance.

Two months ago we wrote about the complexities of Manal and Haitham’s appearance on the show, which included dealing with the Shin Bet, restrictions on the movement of Palestinian citizens of Israel and the fraught connection between Palestinian in Israel and the Arab world.

While the songs and performances are the most central element of the show, Arab Idol also serves as the political focal point of the Arab world. And Khalailah is the shining hope of the Palestinians, who have experienced unrelenting attacks in the past months — from a full-scale operation in the West Bank, to the brutal assault on Gaza to full-blown hate speech and racism against Palestinians in Israel. Khalailah’s presence on the show emphasizes the connection between Palestinians that exists across the world. 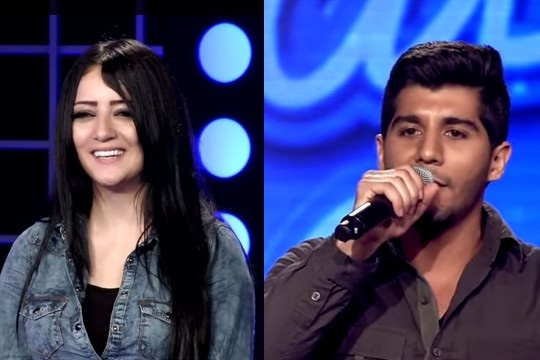 But Haitham’s support should not be taken for granted. Until several years ago, Palestinians with Israeli citizenship were seen as near-traitors among other Palestinians and much of the Arab world. This time, even during the initial stages of the show, Gaza’s Mohammad Assaf, who was crowned last season’s Arab Idol (and the first Palestinian to win the competition), openly supported the Palestinians contestants. He did not question their identity and did not hesitate from treating them as his natural successors.

The fact that Haitham made it to Arab Idol is in itself a clear-cut political declaration on the part of the Arab world, as well as by Palestinian contestants who insist on maintaining their connection to the Arab world. Haitham, like Majd Kayyal before him, is part of a group of young Palestinians in Israel who are crossing borders and refusing to give up their identities, as well as their cultural and national connection to Arabs across the globe.

Palestinian President Mahmoud Abbas was the first to grant legitimacy to Manal and Haitham. The leader of the Palestinian Authority took an unusual step by giving each of them official Palestinian travel documents, which allowed them to reach Beirut. It is well-known that Abbas does not generally insist on maintaining a connection with Palestinian citizens of Israel, and that he doesn’t see them as an integral part of his political decisions. His decision to support Manal and Haitham shows that the connection between Palestinians is stronger than any peace process or border. Abbas is also contemplating opening free Palestinian phone lines for open voting, just as he did when Mohammad Assaf competed in the finals.

Palestinians within Israel have been campaigning for Haitham over the past week, and have even launched an online campaign that brings together artists, media personalities, lecturers, soccer players and business people in support of their representative on the show.

Chances are that Haitham will compete head-to-head with the talented Syrian contestant, who has also received a great deal of support. The Saudi contestant, who some say reached the finale due to his strong financial backing, will most likely not win. Despite the tragedies that have befallen the region, Arab Idol and its finalists prove that life goes on, and that people must find ways to keep struggling. The Arab world will have to make both an artistic and political decision. Perhaps this will be the second year in a row that a Palestinian is crowned winner.

Yael Marom is Just Vision’s public engagement manager and a co-editor of Local Call, where this article was first published in Hebrew.