A month ago, administrative detainee Muhammad Allan was deemed a major security threat to Israel. Now the army has decided to release him on the condition that he does not go back on hunger strike. 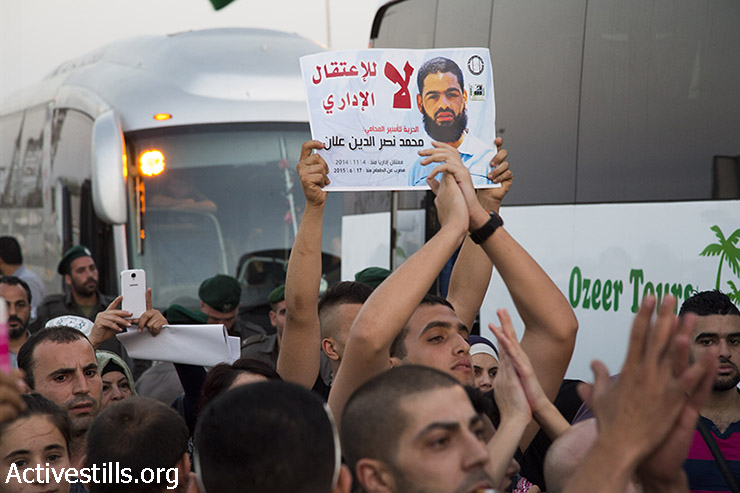 Palestinian activists hold up photos of administrative detainee, Muhammad Allan, during at the entrance to the Israeli city of Ashkelon, where Allan was being treated at Barzilay Hospital, August 17, 2015. (photo: Keren Manor/Activestills.org)

One day a man wakes up to find out he no longer constitutes a threat to the State of Israel. After being imprisoned for an entire year without trial, going on hunger strike for more than two months until he suffered brain damage, was sent back to administrative detention once he began his recovery and went back on hunger strike, the army has decided to release Muhammad Allan.

On Tuesday it was announced that Allan’s administrative detention will not be extended, and that the army will agree to release him on November 4. According to a report by Haaretz, the defense establishment confirmed that the military prosecution will not extend Allan’s administrative order, stating that “his release is conditioned upon him not going back on hunger strike.”

Allan, a 33-year-old attorney from the village Anabous near Nablus, was detained on November 6, 2014. Since then he has been held in administrative detention without having been accused of any wrongdoing. After his detention was renewed a second time — without allowing him a chance to defend himself — he decided to go on hunger strike.

Throughout the strike, the defense establishment claimed that Allan is a member of Islamic Jihad, has been involved in violent activities, and served a three-year sentence after he was convicted for taking part in recruiting suicide bombers and aiding wanted suspects. Even after he was arrested yet again in Barzilay Hospital, the defense establishment claimed that Allan was supporting terrorist attacks, and that it has “a great deal of severe” intelligence on him. The Israeli justice system has yet to present any evidence to back up those claims.

Allan’s struggle reveals the defense establishment’s arbitrary and vengeful decision making process, and the complete lack of any monitoring of the state’s use of administrative detention, which is meant to be used only in special cases. These mechanisms make it possible to determine whether a person is such a grave threat that he/she need to be immediately imprisoned without access to evidence against them, and to release him/her only after the ostensible danger disappears.

So how did November 4 become the date on which Allan will no longer pose a danger? Where is the secret intelligence that determined two weeks ago that, even after suffering brain damage, Allan still posed a threat?

Allan’s hunger strike came to an end after 65 days, when his attorneys petitioned the High Court of Justice with a medical opinion stating that he had suffered potentially irreversible brain damage as a result of the hunger strike. The High Court froze — rather than annulled — the administrative order, claiming that Allan was no longer a threat. This made it possible for police officers to arrive at his hospital bed nearly four weeks after he ended his strike, and return him to the prison clinic in Ramle. There Allan declared that was going back on hunger strike, which ended 10 days prior after negotiations for his release. The army claimed that it had gathered new intelligence proving that Allan still poses a danger.

It seems, however, that since Allan has begun his hunger strike, his most severe crime has been the fact that he has brought attention to his cause. The defense establishment’s response raises many questions regarding the motives for his detention, as well as the way of determining a person’s threat level. Is the defense establishment actually saying that should Allan return to hunger striking, it will be evidence that he has, once again, become a security threat?

Allan’s case demonstrates how easy it is to imprison someone indefinitely without providing evidence against them — without someone so much as raising an eyebrow. This includes the courts, of course, who in a democratic country would have refused to jail people in such an arbitrary manner using procedures that clearly do not meet any standard of law and justice.

If Muhammad Allan will not be dangerous on November 4, he is not dangerous now. He must therefore be immediately released and allowed to continue his treatment at hospitals in the West Bank. Continuing his detention, in the poor conditions of the Israel Prison Service’s medical center, is a vengeful form of abuse that only harms his health.

Get Our Weekly Newsletter
Before you go…
A lot of work goes into creating articles like the one you just read. +972 Magazine is nonprofit journalism, owned by many of our writers, editors, and journalists. In order to safeguard that independent voice, we are proud to count you, our readers, as our most important supporters. With your support, we can keep +972 Magazine a strong, independent, and sustainable force helping push the global discourse on Israel/Palestine.
DONATE
More About High Court of Justice