The Obama administration is only willing to discuss a one-state solution in terms of apartheid and violence. But asked whether Jews and Palestinians should be equal, the vast majority of Americans suddenly become one-state supporters. And then there’s sanctions… 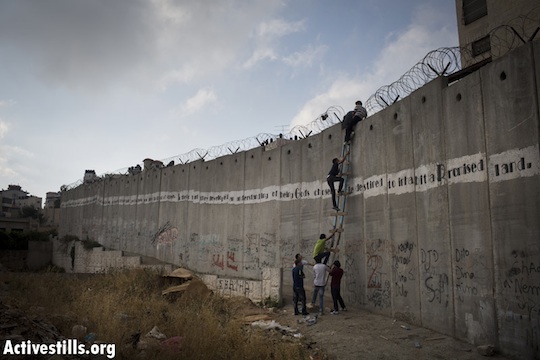 Thirty-seven percent of Americans think the United States should respond to ongoing Israeli settlement construction with economic sanctions, or harsher measures, according to a public opinion survey published by the Brookings Institute last week.

And that’s a relatively consistent position. Thirty-nine percent of Americans gave an identical answer to the same poll a year ago. On the other hand, 61 percent in the 2014 poll said that Washington should suffice with verbal reprimands or do nothing at all about Israeli settlement construction. Brookings did not release the raw data for the 2015 poll and the summary it did publish made no mention how many people thought the U.S. should do nothing.

The pollster, Shibley Telhami, did not ask respondents what the United States should do about existing Israeli settlements in occupied Palestinian territories, however, where an estimated 500,000 Jewish Israelis already live.

To the best of my knowledge, no serious American public opinion polling on the Palestinian BDS call has been published to date.

The second interesting finding in the Brookings poll, prepared ahead of the Saban Forum taking place this week, touched on an issue behind which the American administration has been throwing its weight in recent weeks: what does Israel plan to do if — or when — the two-state solution is no longer tenable, assuming that moment is indeed still in the future.

Speaking at the Saban Forum on Saturday, Secretary of State Kerry made clear his belief that “the one-state solution is no solution at all for a secure Jewish democratic Israel living in peace. It is simply not a viable option.”

Here is where the United States government employs an out-of-sight-out-of-mind attitude toward alternatives to the two-state solution. The only alternative Kerry is willing to discuss is a future of apartheid in which Palestinians are subject to segregation and denied basic civil and human rights. Or where Jewish Israelis are threatened with new levels of strife and violence both from Palestinians and the wider Arab world. 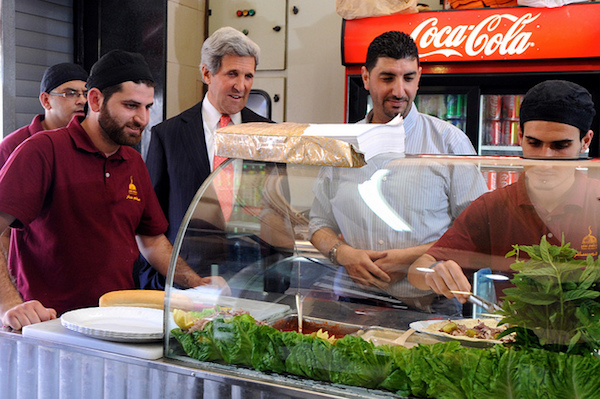 “How does Israel possibly maintain its character as a Jewish and democratic state when from the river to the sea there would not even be a Jewish majority?” Kerry asked attendees of the Saban Forum. “Would millions of Palestinians be given the basic rights of Israeli citizens including the right to vote, or would they be relegated to a permanent underclass? Would the Israelis and Palestinians living in such close quarters have segregated roads and transportation systems with different laws applying in the Palestinian enclaves?”

Never has Secretary Kerry, or anybody in the Obama administration ever publicly imagined that a one-state solution could actually provide equality for all of its residents. They refrain from even suggesting the possibility of such a future, because it would require Israel to become a state that belongs to all of its citizens, ceasing to be a “Jewish state” that is doomed to keep its non-Jewish citizens in a permanent position of political, economic, security and social inferiority.

Unlike Kerry and Obama, however, the American public is far more willing to embrace such a future.

Thirty-five percent of Americans favor a two-state solution, the Brookings poll found, compared to 31 percent who already favor a one-state future. But here’s where it starts to get interesting.

Asked what solution they would prefer if a two-state solution turns out to be impossible, 73 percent of respondents said they would support “a single democratic state in which both Jews and Arabs are full and equal citizens, covering all of what is now Israel and the Palestinian Territories.” (Note: the language of the question is taken from last year’s poll since this year’s full data set has not been released. In this week’s survey the pollster compared the two results — 66 percent of respondents gave the same answer in 2014 — which suggests that the question was asked in the same format in both instances.)

On the other hand, that suggests that 27 percent of Americans would prefer either permanent occupation or a discriminatory apartheid regime. In the 2014 poll, 22 percent of respondents said they would prefer “maintain[ing] the occupation of both the territories Israel has captured in 1967 and the Palestinians inhabiting them indefinitely.” Another 10 percent of Americans said they would prefer “annexation without equal citizenship: Israel would annex the Palestinian territories, but keep a majority-Jewish state in the expanded territories by restricting citizenship rights of Palestinians.” 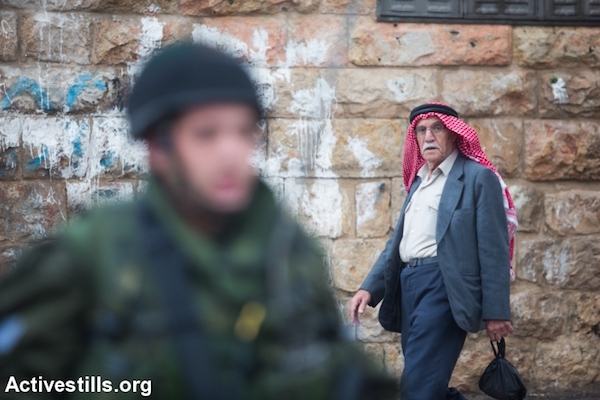 A elderly Palestinian man walks past an Israeli soldier stationed in the center of the occupied city of Hebron, West Bank, October 29, 2015. (Yotam Ronen/Activestills.org)

The Brookings poll indicates that the American public is willing to go much further than its government with regards to ending the occupation and ensuring that Palestinian human rights are realized. In fact, in the 2014 poll a full 83 percent of Americans said that protecting human rights should be at least among the top five American foreign policy priorities. (The question was asked in the context of a poll on attitudes toward Israel and Palestine.)

The United States government, however, is unwilling to go beyond comically friendly censures of ongoing construction in settlements, which constitute a violation of international law and direct lead to the violation of Palestinian human rights. And despite the constantly shrinking number of Israelis and Palestinians who still believe a two-state outcome is a realistic goal — due to Israeli settlements but also because of seemingly unbridgeable gaps between the two sides — Washington is unwilling to discuss any palatable alternatives, only nightmare scenarios of permanent apartheid and perpetual strife.

The American political system is not very good at quickly responding to shifting public views on foreign policy issues of such nuance. Especially in an election year, the only two options any American politician will entertain are either a two-state solution or maintaining the status quo. In moments in history when mainstream politics becomes unresponsive to popular demand, grassroots movements have the greatest potential to affect change. Rest assured, the Palestinian BDS movement is counting on such a moment.