Nobody really noticed the deliberate shelling of a Palestinian medical clinic, even when it was reported in real time during Israel’s war in Gaza last summer. Now, because of reporting by an independent journalist, there is a chance that somebody will be held accountable for what a rights group says is a clear-cut war crime. 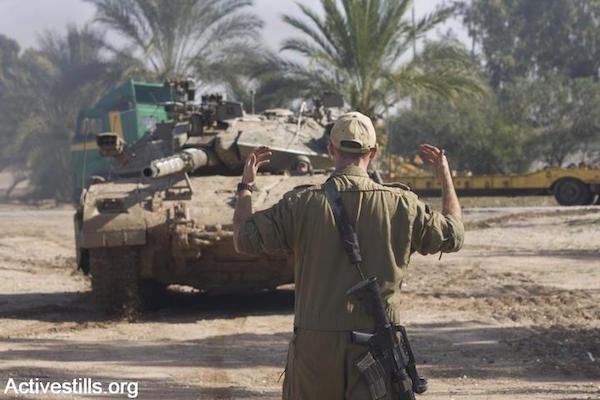 File photo of an Israeli soldier directing a tank. (Photo by Oren Ziv/Activestills.org)

How does an apparent war crime, recorded and reported in real time disappear from the public realm and the radar of military investigators for almost a year? The fog of war? Hiding in plain sight? It’s not quite clear.

The story begins in the middle of one of the deadliest battles of last summer’s Gaza war, in the Shujaiyeh neighborhood, where some 100 Palestinians and over a dozen Israeli soldiers were killed. On July 22, IDF Cpt. Dima Levitas was killed by Palestinian fire. Levitas was laid to rest the next day in Jerusalem’s Mount Herzl military cemetery.

Because the fighting was still ongoing, his fellow soldiers were still positioned in the same area where Levitas was killed and were unable to attend his funeral. So they decided to participate remotely, and to give him a 120-mm tank shell version of a 21-gun salute.

One day later, on the NRG news site, formerly the website of Ma’ariv and now owned by Israel Hayom, an audio clip was published. According to the NRG report, the clip is a recording — over the army two-way radio — of Lt.-Col. Neriya Yeshurun eulogizing Levitas, and ultimately ordering a barrage of tank fire, “in his honor,” directed at a medical clinic.

The following is my translation of the recording, allegedly of Yeshurun, as rebroadcast by Israel’s Channel 10 this week:

At this very moment, as Dima is being buried at the cemetery in Mount Herzl in Jerusalem, the heart wants very much to be in Jerusalem but the mind says that [we] need to be here, that we need to continue.

We didn’t come here for fun and we have an important mission that I’m very proud to see you all taking part in. I trust that you will all march on despite the pain and despite the hardships that accompany every soldier — to continue [carrying out your mission] as best you can.

Here, in the middle of Shujaiyeh, in Gaza, I want us to join all of those people who are accompanying Dima on his final journey. We will fire a barrage in his honor, for this officer, toward the clinic from which the scoundrels fired on his tank and took his life.

I trust you all and I’m proud of you — prepare for a barrage in memory of Dima, may his soul be bound up in the bond of life, amen.

The lieutenant-colonel seems to order tank shells be shot at a medical clinic when there is no apparent military need, and no immediate threat emanating from the building. If that is the case, it could be a war crime. 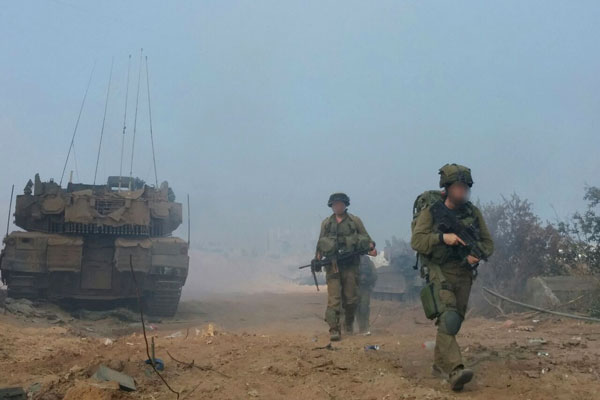 Despite the fact that NRG published the recording a day after the incident, on July 14, 2014, no investigation was opened at the time. The entire affair simply disappeared for the next nearly 11 months. Until now.

Last week, Charlotte Silver published an account of the affair in English on Electronic Intifada. Silver’s article caught the attention of Israel’s Channel 10 News, which before publishing the story again in Hebrew, brought it to the attention of the army.

Asked by Channel 10 if the incident was investigated then, or is being investigated now, the IDF Spokesperson said that it “is being looked into.”

Speaking to Electronic Intifada, head of Palestinian human rights group Al Haq, Shawan Jabarin, described the incident as a clear-cut war crime. “It is clear, from the intention, the mental element, and the material element: there was no military necessity,” he said.

A strikingly similar incident is detailed in a report of testimonies (page 126) from Israeli soldiers who participated in the Gaza war, published by Breaking the Silence last month:

They started saying that some guys were injured, some guys maybe killed, seriously injured, and the game of where and who-knows-what-happened got going. The company commander came over to us and told us that one guy was killed due to such-and-such, and he says, “Guys, get ready, get on your tanks, and we’ll fire a barrage in memory of our comrade.”

Following the latest Gaza war the Israeli army set up a new mechanism for investigating criminal acts carried out by its soldiers. Of the 126 incidents that passed through that pre-investigation new fact-finding mechanism, as of March 22 of this year, only six resulted in criminal investigations.

War crimes do not exist in Israeli law, so even if an Israeli soldier is found to have committed a war crime, he or she would be convicted only under normal criminal code.

The amazing part of this story is that it was reported in real time, and despite the clear-cut evidence, no investigation was ever launched. And now, due to the reporting of Electronic Intifada, the Israeli army will likely launch a criminal investigation into the alleged orders of Lt.-Col. Yeshurun last year.

The International Criminal Court prosecutor has launched a preliminary examination of potential war crimes in Israel and Palestine that includes the summer’s war. But under the principles of international law, if Israel itself investigates alleged war crimes in earnest then the ICC would not have jurisdiction.