Just 20 years ago, female genital mutilation was an accepted practice in six Bedouin tribes in southern Israel. Jewish researchers couldn’t figure out why the practice disappeared — because they didn’t talk to the Arab women’s group fighting it. 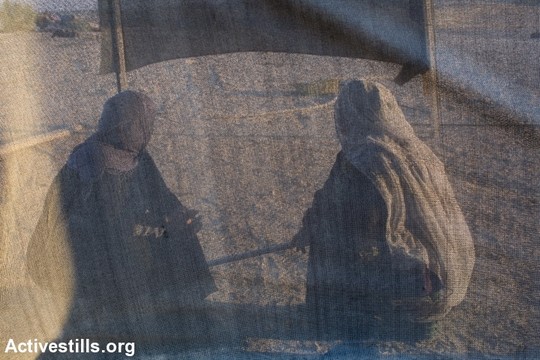 Half a century ago, one didn’t need to go all the way to Kenya to research the phenomenon of Female Genital Mutilation (FGM): you could do so in Israel. The practice was common among some of the Bedouin population in the Negev, and this was 40 years after the majority became Israeli citizens.

A number of years ago, Dr. Haim Balmeker, a psychiatrist from Ben-Gurion University Medical School, gave an interview to Ynet’s Avital Lahav about his research project from 1993, which revealed that six Bedouin tribes in southern Israel practiced FGM by cutting off the woman’s clitoris:

My research was based on two sources. One was a poll in which women were asked if they had undergone FGM, and a gynecological examination. The examination took place for health reasons that were not connected to the research, but we asked for the women’s permission to allow the doctor to check whether they had undergone mutilation. We found six tribes in which all the women had undergone cutting.

According to Dr. Balmeker, the research briefly made waves. “Bedouin doctors attempted to fight against the phenomenon,” he says, “but they quickly came up against stubborn opposition based on tradition and closed tribal norms.” And just like that, after 15 years, researchers returned to those same six tribes in 2009 and did not find a single woman under the age of 30 who bore scars.

Members of the tribes offer up no explanation for the phenomenon. “There are processes that simply cannot be expressed with language, like the loss of tradition,” Balmeker told Ynet. Most of the time they deny the existence of the practice with the same fervor with which they defended it just 15 years prior. “Women who took part in the previous study claimed that this was an important tradition, and that they would not give up the right to cut their daughters. It seems like time is stronger than any declaration.”

“This is an example of modernization among the Bedouin population in the Negev,” Balmeker sums up. “There is no downplaying this development, although it is unclear who should receive credit for it,” added Lahav.

It is time, then, to reveal exactly how and why this dramatic change took place: a feminist Palestinian organization, Al-Fanar, exposed the phenomenon to the public and went to war against it.

Al-Fanar was established by Palestinian women from Israel, with the goal of struggling against the ills of Palestinian society and the Israeli authorities that cultivate them for their own reasons. Al-Fanar’s main struggle was against the murder of Arab women, what is often called “honor killings” — a codename for crimes committed in the name of maintaining male supremacy. The organization also fought against a series of injustices, whether they stemmed from Arab patriarchy or the Jewish state.

The fight against female genital mutilation among these Bedouin tribes was one of Al-Fanar’s most important struggles. In June 1992, the organization distributed flyers in Arabic condemning the phenomenon, criticizing the silence around it, and calling for an end to FGM. The decision to act came following the results of the study, which were published in a “Harefuah” medical journal the same year.

The flyer, under the headline “Put an end to female genital mutilation,” read as follows: “Recently four doctors published a study revealing another custom by the patriarchal, backwards traditions of Palestinian society, a custom that left and continues to leave many victims that no one talks about.” The flyer also attacked the silence surrounding the practice: “Quietly, away from the public eye and human morality, Bedouin teenagers are being attacked. They are being stripped of their bodies and their mental health, and are becoming handicapped due to their families, in the name of tradition and customs from the dark ages.”

The flyer goes into detail about just how female cutting handicaps these young women: “These teenage women undergo a horrifying and humiliating surgery whose purpose is to prevent them from enjoying sex and a fulfilling married life… and no one says a thing. This barbaric act turns the Bedouin teen into a container for the man’s desires and an unemotional birth machine… it makes her more vulnerable to diseases and turns her life into one of suffering.”

‘It’s just a piece of skin’

As part of its struggle, Al-Fanar turned to various bodies, including the Israeli attorney general, the police, children’s rights groups, the Palestinian leadership, members of Knesset, and others.

Dr. Manar Hassan, one of the founders of Al-Fanar who teaches at Ben-Gurion University, told me that it was the Israel National Council for the Child, which immediately enlisted in the fight against the phenomenon. Members of the Council met with Bedouin social workers, agreeing the the Council would be willing to “lend a helping hand in collecting and going over information on this painful subject.” The members also expressed their willingness to “assist with legal aid in order to protect girls from these kinds of acts.”

But not many groups agreed to be associated with Al-Fanar in this struggle, and some even supported harming these young women. In June 1992, the newspaper Al-Sinara published an interview with Dr. Abed Asli, one of the four doctors who took part in the study published in Harefuah. In the interview, Asli explained that the “purpose of the study was solely medical and scientific.” Asli described FGM as practiced by the Bedouin tribes as follows: “It’s no more than a small wound, a removal of a piece of skin.”

When Asli was asked about the effects of FGM on women’s sexual pleasure, he responded that the practice is done in Africa “in order to ensure male domination of the woman when it comes to sex,” since “removing the clitoris prevents a woman from succumbing to her sexual desires.” Asli then immediately claimed that this diagnosis does not apply to the Bedouin tribes in Israel. Here, he says “no one shown that female cutting harms girls’ sexual pleasure or that it is meant to control women.” Furthermore, he added, “we must confirm whether or not the clitoris causes women to reach orgasm.”

The apex of Asli’s medical, scientific study is his recommendation to conduct female genital mutilation against girls under “medical” and “scientific” supervision as a “first step,” rather than “at the hands of unprofessional women with no medical training — medical and scientific supervision that will take place in clinics, so as to avoid complications.”

The women of Al-Fanar demanded to publish a response to the interview in Al-Sinara, but the newspaper refused. Instead the organization published it its journal under the headline “Silencing the victims,” which praised that the study “for the first time ever put Israel on the list of countries where this horrible practice takes place.” The article also condemned “Dr. Asli’s unwillingness to take responsibility for exposing this criminal phenomenon, which leads him to defend and prop it up.”

The doctor’s suggestion of “carrying out the deed in appropriate medical conditions” was condemned and rejected. According to Al-Fanar, the suggestion “is nothing more than an attempt to grant legitimacy and perpetuate the crime.” The group further wrote that “female genital mutilation is a heinous crime against helpless girls. Governments under which this procedure takes place, as well as doctors who do not report these crimes, are nothing more than criminals.”

Dr. Balmeker, who describes how his study led to minor controversy, was probably not aware of what was happening in Arab society in those years. In 1992-1993, the issue of FGM was one of the most important topics among Arab citizens of Israel.

Exposing the Jewish population to the issue surely helped, with Israeli feminist organizations supporting Al-Fanar’s demands vis-a-vis the authorities once there were reports in the Hebrew press. Six months after Al-Fanar’s declaration of war, the Knesset established a committee to promote the status of women. Immense pressure was put on the Bedouin tribes from both the authorities and the Arab leadership.

The pressure was extremely successful, and we must try to understand why, even if we do not have clear answers. According to the feminist activists, the success was due to the fact that only Bedouin women really cared about the custom, while the men had already understood that expressing an opinion on the matter was beneath them. Since the Bedouin patriarchal structure preferred to ignore the issue, the pressure was able to convince the women. But we must remember that none of this would have been possible without the hard work of the Palestinian feminists from Al-Fanar.

Eli Aminov is a committee member for A Single Secular Democratic State in Palestine. This article was first published in Hebrew on Local Call. Read it here.