It is often difficult to view the Palestinian struggle as an attempt to protect land, livelihood, and life. But the faster we do so, the faster we may be able to prevent more innocent blood from being spilled. History, after all, may not end up being so kind to us.

As an American, Israelis often tell me I have no right to criticize Israel’s treatment of Palestinians. “Look at what the U.S. did to the Indianim,” I hear more often than you might think. And justifiably so: the sheer scope of the U.S. government’s decimation of Native Americans feels, frankly, impossible to wrap my head around. 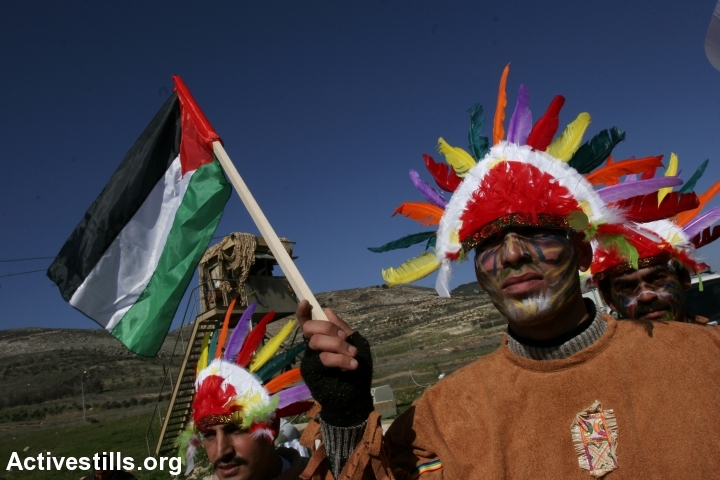 Palestinian dress up as Native Americans during a protest as part of the ’30 Days Against Roadblocks’ campaign, Huwwara checkpoint, outside of Nablus, January 14, 2007. (photo: Oren Ziv/Activestills.org)

Yesterday was Indigenous Peoples’ Day, which means that instead of celebrating the exploits of Christopher Columbus, Native Americans celebrated their own cultures and histories. What started as a local initiative in Berkeley, California over 20 years ago has spread to other cities and morphed into a nationwide phenomenon, posing a direct challenge not only to Columbus Day itself, but to how we view and think about the very history of the United States.

I am not Native American, so I will not write about Native cultures or histories, least of all because I am no expert on the matter. I could talk about the massive campaign of ethnic cleansing of American Indians by the U.S. army, the intentional spread of disease by white settlers, the wholesale removal of entire tribes from their lands, the treaties — signed in good faith by countless tribal leaders — broken by the government, the massacres, or the theft, rape, and enslavement of Native women.

Since the first settlers arrived in Jamestown, Virginia until the Battle of Kelley Creek (also known as the Last Massacre), the history of U.S.-Native relations has been rife with numerous cases of extreme violence by Native Americans against white, European settlers. 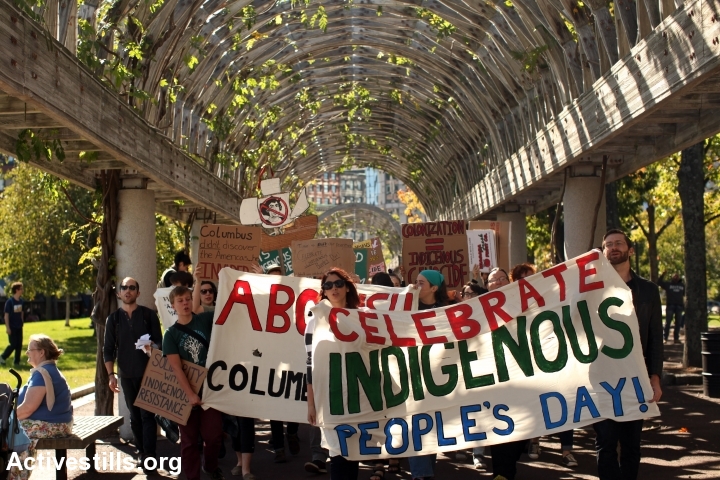 Take, for instance, the Big Bottom massacre of 1791, where Wyandot Indians massacred eleven men, one woman, and two children near present-day Morgan County, Ohio. Or the Killough massacre, in which Cherokee Indians murdered 18 European settlers in what was then called East Texas. Or the Enoch Brown school massacre, where four Lenape Indians entered a schoolhouse in present-day Pennsylvania, murdered schoolmaster Enoch Brown, and tomahawked and scalped a classroom full of children. Nine of the students were murdered, four were taken as prisoners.

There were countless others. Graphic, gory, utterly devastating stories of Native Americans massacring settlers. There are also no possible justifications for these kinds of acts, even retroactively. Nothing legitimizes the murder of innocents, and we cannot pretend these stories never took place.

And yet, until the 1960s talking about the U.S. government’s treatment of Native Americans was considered taboo. It was books like Dee Brown’s seminal “Bury My Heart at Wounded Knee,” released in 1970, three years after the establishment of the American Indian Movement and two years after the U.S. Army massacred hundreds of innocent Vietnamese at My Lai, that forced mainstream America to contend with the whitewashed narrative of Manifest Destiny — what TIME Magazine called the “saloon art and horse operas that romanticized Indian fighters and white settlers.” 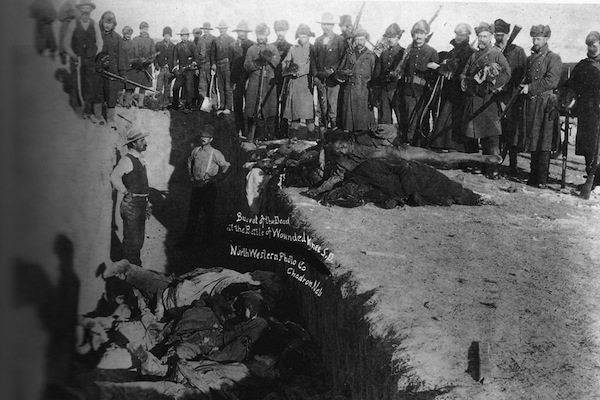 Since the release of Brown’s book, it has been far more difficult to lambaste Americans for using words like “genocide” and “ethnic cleansing” to describe what was done to Native Indians.

And that’s precisely the point.

Native Americans committed shocking acts against white settlers and soldiers alike, whom they rightfully viewed as their enemies and oppressors. But looking back, the plunder of nearly every aspect of Native American life unequivocally dwarfs the often brutal violence committed by Native Americans. In fact, comparing the two would be absurd. Does this absolve individuals or entire tribes of responsibility for taking the life of others? No. But pointing out the violence used by Native Americans actually helps explain what led to it in the first place.

Read: There’s never been a better time for a shared future

The removal of tribes from their land and the subsequent erasure of any trace of their existence required the work of an entire, well-oiled system; this was not the work of settlers in caravans or militiamen lying in the wait. History teaches us that Native Americans resisted in the only way they could, and that the failure to defeat their enemy was simply the result of an inability to get rid of those who came to take their land.

There are many, fundamental differences between the treatment of Native Americans by the U.S. government and Israel’s treatment of the Palestinians — most obviously, the absence of genocide. But the core of the system — the creeping annexation of land and desire for more of it — is stark.

Native American acts of violence are hardly remembered today, and put into context they are seen as part of a just struggle waged against the theft of everything they knew. In real time, especially as an Israeli, it is difficult to view the Palestinian struggle — which has led to its fair share of bloodletting — as an attempt to protect land, livelihood, and life. But the faster we do so, the faster we may be able to prevent more innocent blood from being spilled. History, after all, may not end up being so kind to us.