This week, a group of 50+ Israeli high schools students and youth penned a letter to Prime Minister Netanyahu declaring their refusal to enlist in the army as an act of protest against Israel’s 47-year old military occupation of the Palestinian Territories.

And the system is scared. 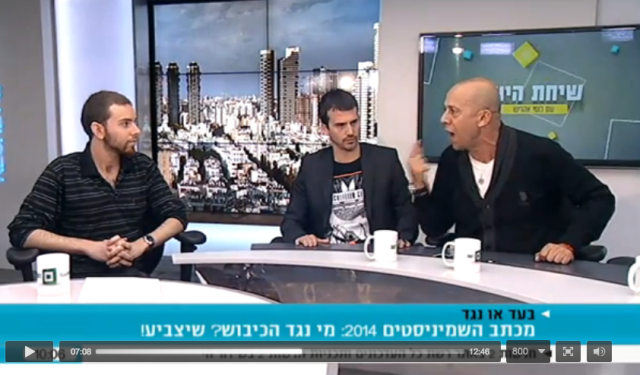 Israeli talk show hosts Israeli refusenik. ‘Do you understand where you live?’

In light of the reactions to the letter, I think it is worth pointing out a few indications as to just how powerful this act is, and how deeply it scares the system.

Indication #1. This clip from Channel 2, Israel’s biggest TV news channel, in which a panel of public figures conducts a so-called “interview” with one of the young refuseniks:  http://reshet.tv/Shows/todays_talk/videomarklist,233902/

It’s in Hebrew, but it doesn’t really matter if you understand Hebrew or not. Starting from minute 3:00, it is virtually impossible to understand almost anything being said, because everyone is just yelling. (Okay, a few gems that did shine through the bellowing here and there: “you are dishrags,” “you will have the mark of Cain for the rest of your lives,” and “this act reminds me of the murder of Yitzhak Rabin”). Whether you speak Hebrew or not, watch this piece, or at least a few minutes of it, and tell me that you don’t see fear thinly veiled by bulging-veined aggression.

Indication #2. Yair Lapid, the politician elected on a ticket of Inoffensive Fluff and populist anti-Haredism (going so far, once elected, as to apologize to God last Yom Kippur for not yet having succeeding in drafting the Haredim (today his law passed)), has also lashed out on Facebook against the refuseniks: “…draft dodging is not an ideology,” he writes, calling the youth “spoiled” and concluding: “I am ashamed of you.” In response to Lapid’s post, the refuseniks wrote: “Yair Lapid, we are ashamed of you and your government. You claim to believe in democracy, but you are serving as a minister in a government that rules over millions of Palestinians who did not choose it and cannot legally impact its decisions…” Yair Lapid is intimidated by actions and words that are driven by deeply held moral values, which he seems to lack (drafting the Haredim is not a moral value), and which threaten his comfortable throne in a government based on oppression.

Indication #3. The principal of one of the schools at which a few of the signatories study practically tripped over himself in order to emphasize that “No, no, no, we’re not like them.” In an interview with Channel 2, Haim Ditschman emphasized, “Our school takes great effort to raise the percentage of students who enlist, and indeed, we’ve arrived at a meaningful change, from 70% to 90%” to 150% sir, yes, sir, please don’t think that we support these people, sir. They’re flukes, sir. It not our fault, sir. We’re sorry, sir.

I am not writing this to celebrate the fear raised by this letter in and of itself. I am writing this because the system is broken, and in its brokenness, it is on a killing-spree, taking the lives of more and more Palestinians virtually every week, sometimes every day, sometimes many in a single day. A broken system can’t be fixed from within; an unjust law should not be obeyed. This action is exactly the type of action that is needed.

A final note, on two different types of fear. The most brilliant trick of the system in questioning, attacking and smearing these refuseniks is and will continue to be the spin of disguising their fear of losing power as a fear of annihilation. They say:

”What if everyone decided to refuse to serve in the army?”

They answer: That would be the end of Israel.

Thereby conjuring up existential fear which leads to burning anger against these kids, and it feels righteous, it feels just, it feels true, it feels unquestionable.

But they are intentionally asking a false question. The real question is this (and of course those who prop up the system won’t ask the real question, which could chip away at the legs of the high chairs upon which they sit):

What if everyone decided to refuse to serve in the army in protest of the military occupation of the Palestinian territories?

That would be the end of the military occupation of the Palestinian territories. In other words, if 500 or 1,000 or 10,000 more youths stood up and declared: we won’t serve in an army that occupies, those in charge would be forced to reassess their commitment to the occupation.

Moriel Rothman is an American-Israeli writer, poet and activist based in Tel Aviv. This post was first published on his blog The Leftern Wall.

Read more:
Israeli teens tell Netanyahu: We will not take part in occupation