A new book examines the ways in which Israel’s policies of displacement in the Negev are also drastically changing the environment where hundreds of thousands live. 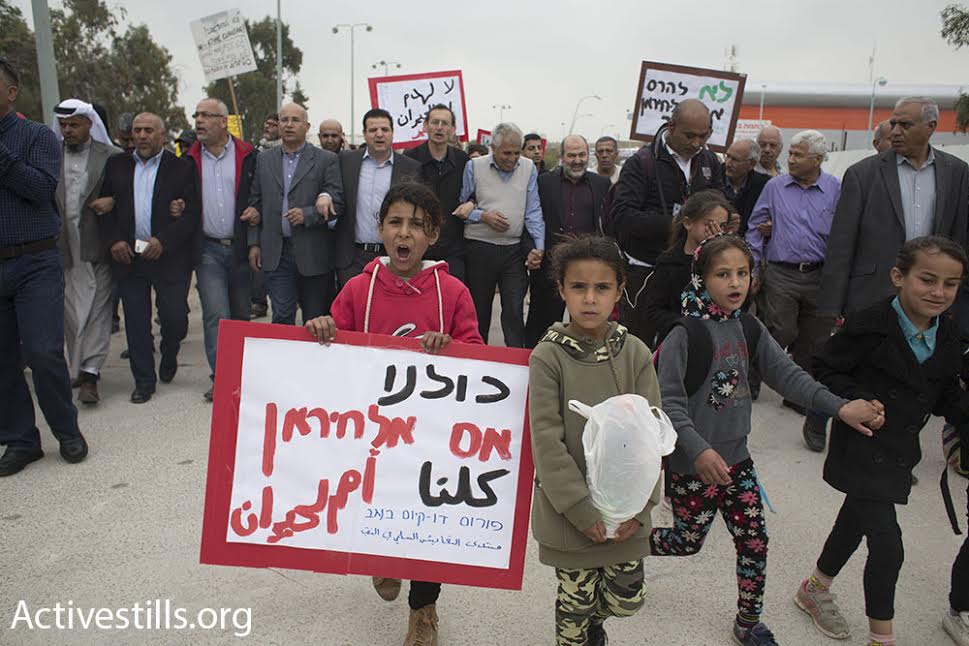 What do you think of when you think of a desert? An area with little precipitation, mostly uninhabited except perhaps by nomads? An empty place with no history, waiting to be filled with people and vegetation? A new book by professor of architecture Eyal Weizman and photographer Fazal Sheikh unpacks these assumptions, and exposes how they are being used by Israel in displacing its Bedouin citizens in the Negev. The Conflict Shoreline: Colonialism as Climate Change in the Negev Desert accomplishes this through a combination of groundbreaking research and striking photographs.

Deserts are most commonly defined as areas that receive less than 200 millimeters of annual rainfall. Areas that are beyond this isoheyt — the line that connects the points that receive this amount of rain — are said to be empty of permanent inhabitants, since it supposedly impossible to grow anything there. Thus the Negev/Naqab has become a dumping ground for polluting industries, garbage, and radioactive storage sites. It houses military live-fire training zones as well as incarceration facilities for Palestinian prisoners and African refugees. During the 2014 conflict with Gaza, the Iron Dome anti-missile system was programmed not to protect this “empty” region.

Using Ottoman-era documents, aerial photographs from World War I and post-World War II, as well as testimonies from inhabitants, Weizman demonstrates how, since the end of the 19th century, Bedouin increasingly cultivated this area, using terraces, dams, canals, wells, and cisterns. The pre-state Zionists recognized the Bedouins’ legal rights to the land when they attempted to buy land from them. The desert was never empty, but it was emptied of an estimated 90 percent of its Bedouin inhabitants between 1948 and 1953 in what the book terms the “Bedouin Nakba.” This involved massacres and widespread destruction of livestock and property.

The remaining inhabitants, those not driven into Jordan and Egypt, were concentrated in an enclosed area, the Siyaj (Arabic for “enclosure” or “fence”) — 1000 square kilometers, east of Be’er Sheva. Following the end of military rule in 1966, many of the inhabitants were transferred yet again, this time to townships further away from their ancestral land. Others remained in villages which are to this day “unrecognized,” with no electricity, roads, water, or schools. Because they are not protected by Iron Dome, a resident of one of these villages was killed in July 2014 by a rocket from Gaza, while four of his family members were wounded. “Still, the state has not installed shelters in these villages, as it does in all other civilian communities; it advised the Bedouins to simply lie on the ground when they hear a rocket about to land with their hands protecting their heads” Weizman writes.

Ironically, the attempts to “make the desert bloom” by displacing the local inhabitants and replacing them with Jewish National Fund (JNF) forests may in fact be leading to desertification. Weizman argues that the earth mounds built to irrigate trees stop most rainwater from reaching the valleys below, drying up the ecosystem and increasing salinity, making them less suitable for grazing. The trees absorb heat and water and remove it from their immediate environment, leading to overheating. Data on yearly increases in temperature suggests a local effect of climate change, in tandem with the global trend. 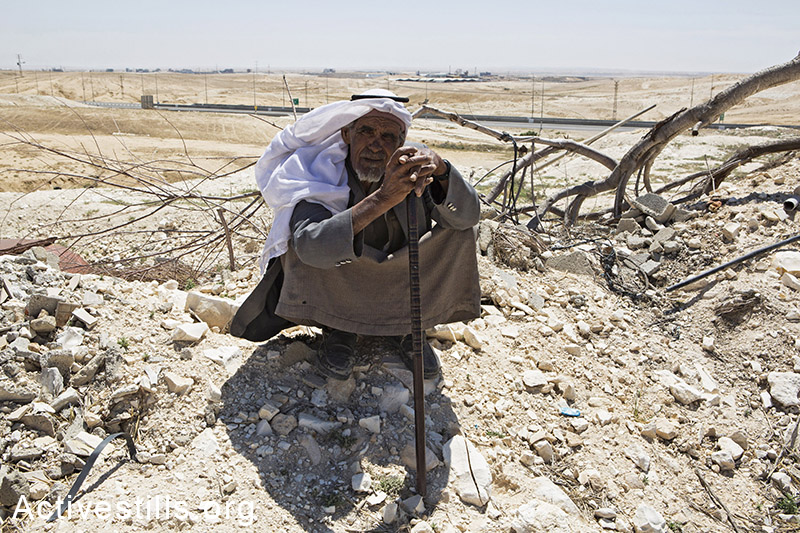 A man from the Zanoun family sits next to the ruins of his house a few hours after it was demolished in the unrecognized bedouin village of Wadi Al Na’am, Negev Desert, May 18, 2014. (Activestills.org)

The Conflict Shoreline documents not only this history of displacement and desertification, but also powerful and diverse forms of resistance: the father of the Bedouin lawyer, Nouri al-Uqbi, who refused until his death to pave the floor of the house in the township to which he was displaced to; al-Uqbi himself, who has accumulated over 70 indictments for his stubborn attempts to return to his land in the village of Al-Araqib, which the al-Uqbi family was told to evacuate for six months in 1951 because of a military exercise; the geographer Oren Yiftachel who painstakingly combed through the legal evidence to counter the state’s arguments that the land was empty (showing, for instance, that an often-quoted nineteenth-century British traveler, who reported that the area was empty, had visited it during an unusual period of drought); and the authors themselves – Fazal Sheikh, whose breathtaking aerial photographs document the different marks Bedouins have left on their land, and Eyal Weizman, who pores over World War II-era aerial photographs to uncover details of gardens, dams, plowed fields and livestock pens in this supposedly empty area. The text is accompanied by a series of historical and contemporary photographs, inviting the reader to participate in the legal detective work.

The Hebrew edition of the book was released in January in Al-Araqib, which has been destroyed close to 100 times to make room for a JNF forest. Hardly anything remains of the village, apart from its cemetery. During the event, organized by Israeli NGO Zochrot, which tries to raise awareness of the Nakba among Israeli Jews, Weizman presented the findings to dozens of the village’s inhabitants, as well as activists from around the country. The event provided the locals with an opportunity to retake their land, thus demonstrating once again how academic research and art have amplified this dramatic local struggle.