For the past 11 years, Israeli journalists have been forbidden from entering Gaza. This has affected not only their reporting, but also the way fellow Israelis understand what is happening there. 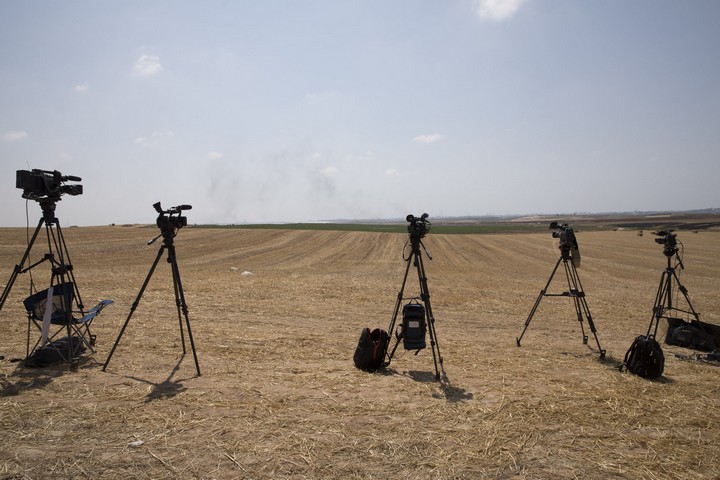 Cameras belonging to news crews stationed at the Israeli side of the border with Gaza attempt to capture the clashes near the fence, May 15, 2018. (Oren Ziv/Activestills.org)

The main obstacle that faces anyone who wants to report on what is happening at Gaza protests from the Israeli side of the border is that one can hear the gunfire, see the smoke, report on the army’s conduct, and estimate the number of protesters — and yet, you cannot get the full story. A journalist from East Jerusalem who often covers the goings on at the border summed it up perfectly: “We can hear the bullets, but we can’t see the blood.” Since Israel placed Gaza under siege 11 years ago, Israeli journalists have been forbidden from entering the Strip, both in times of conflict and calm. This was never Hamas’ decision; it was Israel’s.

At around noon, dozens of Palestinians gather at the Great Return March encampment at the northern edge of the Gaza Strip, and the Israeli army fires large quantities of tear gas to disperse them. Earlier in the morning, the journalists on the Israeli side stood about and argued about whether it would be a quiet day, or whether the violence would flare up following the noon prayers and the funerals of the 60 Palestinians shot dead a day earlier. Despite conflicting reports, the Great Return March encampment was still there.

Twenty kilometers south of the border, I meet Bar Hefetz, a kibbutz member, farmer, and left-wing activist from Kibbutz Nirim. He takes me for a tour alongside the border in his kibbutz-issued vehicle, and among the banana trees one can see the soldiers’ positions. “Unless you go out into the fields, you can barely hear the gunfire in Gaza,” says Hefetz about daily life in the shadow of the protests happening less than a kilometer from his home over the past few weeks.

We continue on until we reach a structure. Hefetz says that until 1948, it served as a school in Abu Sitta, a village that was destroyed and whose residents were expelled during the Nakba. Since then, its residents live in Khan Younis in the Gaza Strip, whose eastern neighborhood can be seen from the fields of the kibbutz.

“It isn’t frightening. I do not worry that anyone will come here,” he says when asked about the possibility of masses of Palestinians breaking through the fence. “No one ever thought that people would cross the fence. Only a small group has managed to do it. They took photos of each other with flags and returned.”

On the wall in Hefetz’s office, alongside maps of the region, hangs a “kite bomb.” Hefetz found it while driving around in the fields. Its colorful tail is connected to a can of Coke, which was filled with flammable material. The kites, which are flown from Gaza into Israel, have set dozens of fires in fields across the fence. 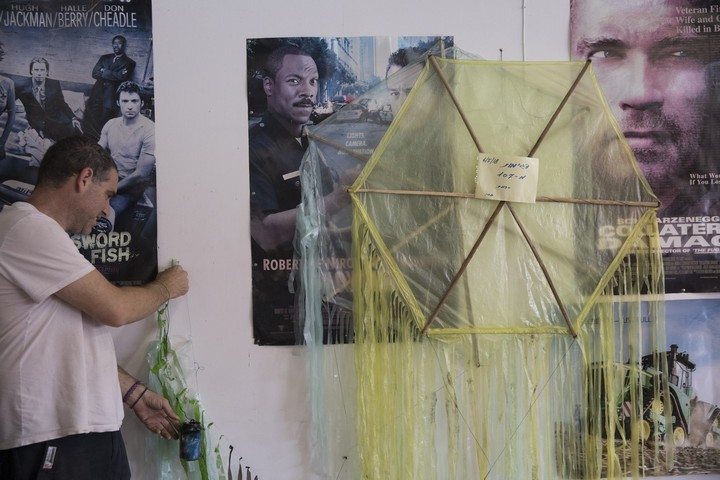 Nirim resident Bar Hefetz stands beside a ‘kite bomb’ sent by Gaza protesters into Israel. The kites have led to dozens of fires in fields on the Israeli side, May 15, 2018. (Oren Ziv/Activestills.org)

Today, 400 people live in Nirim, a kibbutz that was established by the left-wing Hashomer Hatzair youth movement. “There are a variety of opinions, but everyone is leftist in one way or another,” explains Hefetz. “People in this area – right wingers in Sderot or leftists in Nirim – are much more defined by their conservativism and fatalism. The sense that they have no influence, that nothing will change.” Hefetz himself says that he does not believe that he is resigned to fate. “I do think that people can change. But for this we need a mass of people, not necessarily a big one. The heads of the regional councils are in a difficult place, Hefetz explains. “Even if they think like me, they still need to maintain good relations with the government for their budgets.”

At the same time, Meretz head Tamar Zandberg and Meretz MK Mossi Raz are visiting the kibbutz alongside Avi Dabush, a local party member. Nirim is one of the points on their trip down south, which included a visit to Sderot, the Eshkol Regional Council, and a ride along the border. “We came here because we sensed frustration. We were here before Passover, a day before the first large protest, and we warned that this was going to happen,” Zandberg says. “We knew that there would be a large number of events happening in the run-up to Monday’s protest and the U.S. Embassy move, which today looks like a very unnecessary and cynical move.”

“So many opportunities were missed,” Zandberg continues. “From the ceasefire offered last week, and until the demands to open a seaport and allow workers from Gaza into Israel.” What kind of message does she have for the soldiers stationed at the border? “The simplest message there is: you must open fire only in life-threatening situations. These are the IDF’s rules of engagement, as well as Israeli and international law. You cannot open fire when there is no threat to your life.” 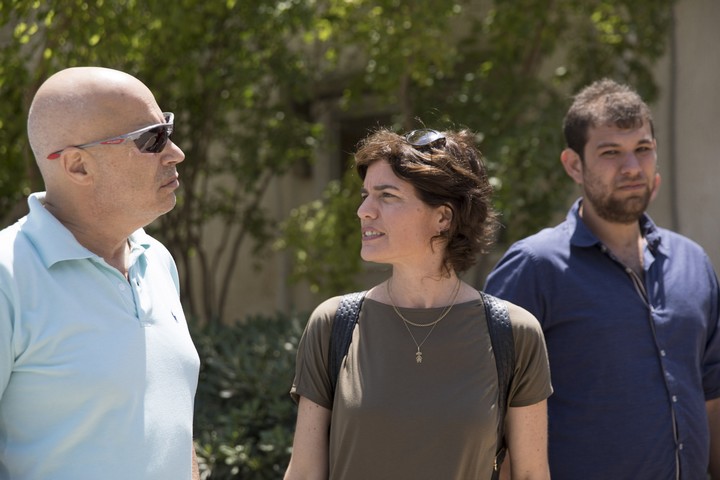 “Netanyahu and Hamas worked together to bring us to this situation,” says Raz as we stand by the kibbutz cafeteria. “We must open a port in Gaza, allow work permits, and ease the blockade and the siege, which have brought us to where we are today.” Raz says we must remember that Israel has crossed over into Gaza a number of times these past few years. “Over the past four years we have crossed over in order to level the buffer zone beyond the fence. More than 100 times since Operation Protective Edge. I cannot justify opening fire on the IDF, and thus I cannot justify opening fire on Palestinians who approach the fence.”

The Knesset members leave the kibbutz, and I decide to call up a foreign journalist who has been in Gaza over the past few days. Perhaps through her eyes we will be able to better understand what is happening beyond the fence. She is a veteran journalist, who has covered a number of bloody conflict zones. She’s clearly upset. “Yesterday was madness,” she says. “At a certain point I stopped counting the number of people wounded who were evacuated from the area.” She describes one scene at the main protest in Jabaliya, across from Kibbutz Nir Oz. “The people who stood next to me, hundreds of meters from the fence, who did nothing, were shot by snipers. Someone who stood near me was shot between his eyes,” she says. In another case, she said she saw the driver of a few foreign journalists shot while he was standing alongside them. 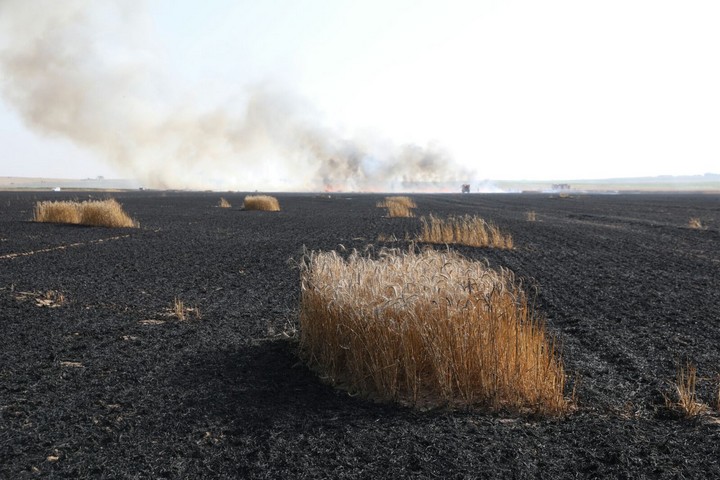 A burned field belonging to kibbutz Nir Oz, after it was lit on fire by kite bombs flown from Gaza, May 15, 2018. (Oren Ziv/Activestills.org)

I head back to Black Arrow, the memorial site for the previous war in Gaza, located at northern border, where dozens of news crews are reporting. The IDF Spokesperson permits journalists assemble here, and it is from here that one can see the encampments on the other side of the fence. We can only see a few dozen people standing about, and a giant Palestinian flag towering above the white tents. 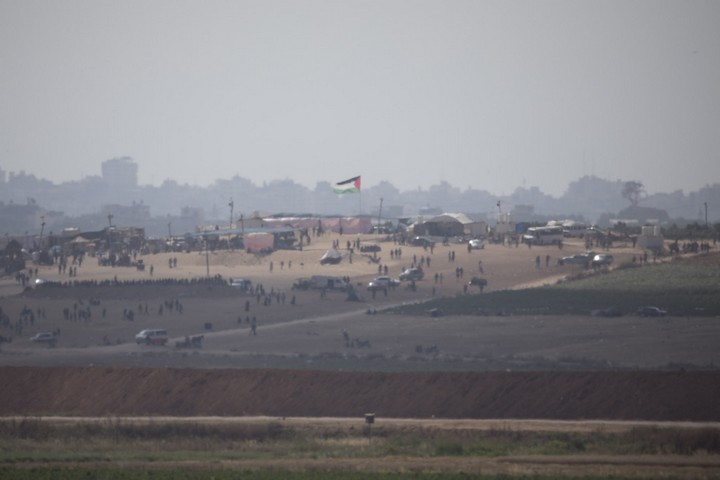 From this distance, however, it is impossible to know what is happening on the other side of the border. The journalists who are reporting from the border are, in fact, far away from the action. Since the siege was put in place, the information that reaches Israelis through the media is always second or third hand. Often the reports and photographs are by the IDF Spokesperson or different Israeli authorities, sometimes from foreign or Palestinian journalists, activists, and NGOs.

Often times we are prevented from even reaching the border itself. Israeli journalists have not stepped foot in Gaza for 11 years. They have not seen what they are reporting on with their own eyes, have been unable to do first-hand reporting or cross-referencing, making it it is possible to keep the ongoing catastrophe in Gaza far from the public eye.