When I ran into an old classmate who suggested that I testify, I told him I had nothing to tell. He insisted, and only then I realized how wrong I was. 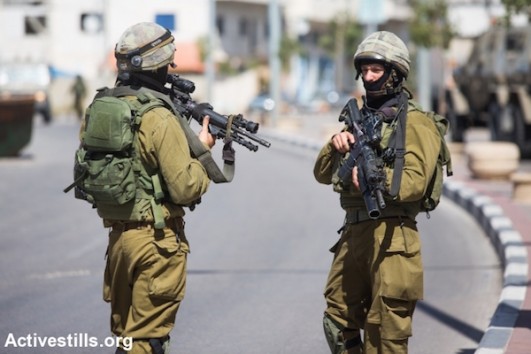 Back in 2008, I ran into Dotan, a former classmate from high school. We started chatting and he told me he was active in an organization called Breaking the Silence. He told me that its members are former soldiers who had served in the Occupied Territories and now strive to expose the Israeli public to the day-to-day reality of the occupation. To this end, he said, they collected testimonies of past and present soldiers.

We spoke at length about the picture they try to paint, and how unaware Israelis are of it. He then asked me whether I’d like to join the organization, and testify about my own experiences as a former IDF soldier in the West Bank. I agreed, but said I had very little to share.

Three and a half years prior, clad in a helmet and a bulletproof vest, I stood inside an abandoned building in the heart of Dura, a Palestinian town in the southern West Bank. My platoon took over the house to carry out the so-called “straw widow” maneuver, a military tactic whereby a sizable contingent ambushes Palestinian militants inside their homes. But a few hours after our arrival, one of the neighbors heard noises and went inside to see what they were. We captured him and latched on to him, so that he wouldn’t reveal our whereabouts.

A few minutes later, another man came in, probably to look for his friend. We captured him as well. When a third person came in, we realized that we had been exposed, but decided to stay put. In the meantime, morning had broken and it seemed like the entire town encircled the building. Dozens if not hundreds of boys were throwing stones at us, and we retaliated by throwing stun grenades through the windows. Soon thereafter, we ran out of stun grenades and were left with no anti-riot weapons, so we started shooting live rounds. We fired everywhere: on street lamps, on windows and doors of the nearby buildings, and in the vicinity of the rioting boys. After a two-hour shooting rampage, our backup finally turned up and we left the town, watching the protesters and the medical teams moving away in the distance.

So one day in 2008, Dotan came to my home in Kiryat Haim. He took out a small recorder, and asked my permission to tape our conversation. I agreed but repeated, apologetically, that I thought I had nothing to say, since I “never killed anyone,” and was, in fact, the “company’s leftie.” He nodded and pressed the record button. We talked about the operations I had been involved in, I described the atmosphere in my unit and shared some memorable events. When we finished, I was very emotional, dumbstruck even. It was the first time I had spoken about my service, without judging or justifying it. The real meaning of that experience suddenly struck me, and I resolved to join Breaking the Silence, to tell the Israeli public about what I did, in their name, in the Occupied Territories

Today, I am the director of Breaking the Silence’s research department, in charge of accumulating testimonies. Since the launch of the organization more than a decade ago, more than 1,000 soldiers chose to share their insights into the day-to-day reality of the military occupation of the Palestinians. Our methodology is pretty straightforward: We interview past or present soldiers about their service, and publish the highlights. It is an open-ended interview, in which the witness is asked to describe his or her service – their missions, the orders and instructions they received, the atmosphere and discourse within the unit, as well as memorable incidents they witnessed.

After last summer’s Operation Protective Edge ended, we started accumulating testimonies from soldiers who had taken part in it. Our researchers interviewed more than 60 soldiers, about a quarter of whom were officers, and about a third conscripts.

We approached them in different ways: Some were traumatized by the army’s brutal assault on Gaza, and chose to come to us. Others had participated in some of our activities – one of our tours of the Hebron areas, lectures or public events – and returned to give evidence. Alongside those, we contacted past testifiers, many of whom had been called up as reservists.

After the interview, we subject the testimony to a strict verification process. Even before we address his or her claims, we double-check the testifier’s reliability. The publicized case of MK Oren Hazan (Likud), who gave a false testimony in an attempt to libel our organization, is a good example of how a testifier is discredited. Very soon, our researchers realized that, contrary to his claims, Hazan hadn’t served in Operation Protective Edge and was not even a former paratrooper.

In most cases, after the testifier is cleared as reliable, we start verifying the story. Every episode, anecdote or practice that they recount is fact-checked to make sure that it happened, and in the way that it was described. To this end, we compare several sources: First and foremost, the story is crosschecked with other testimonies from the same areas. Then, we also rely on media and other reports, including declassified IDF documents.

After the testimony is verified, it is published anonymously. The reason for that is that we want to put an emphasis on the content of the testimony, rather than the testifier’s identity. The army tends to ignore claims of systemic failures, and hold individual soldiers liable. Furthermore, it spares the soldiers the potential repercussions – disciplinary as well as social – for having dared to wash the dirty linen in public.

We call on the Israeli public to listen to these soldiers, and face up to their stories. They were sent to the frontline in our name, and to listen to them is the least we can do to acknowledge that.

Avihai Stollar is Breaking the Silence’s Director of the Research Department.