I’m used to frequent nighttime police raids in East Jerusalem. But a particularly frightening episode led me to seek solace in a childhood obsession: the NBA. 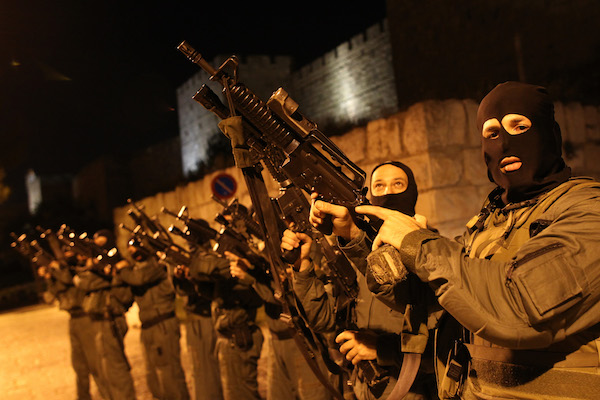 I loved to watch NBA games as a child, even though they were broadcast late at night. An ardent LA Lakers fan, I would rarely miss a game, and watching Kobe Bryant prey on other teams was an absolute delight.

I’ll never forget my mother’s stock response whenever she caught me watching a game on my computer at four in the morning. “Shut down the computer and go to sleep now or I’ll wake up your father so he can deal with you,” she would say sharply. Of course I knew all too well that my mom would never wake my poor father, who used to come home from work late almost every day and had to get up early the following morning in order to wait in an interminable checkpoint queue on the way to work.

So I’d switch off the computer screen, and tell my mother grudgingly, “Here, see — I’ve switched off the computer, I’m going to bed straightaway, just don’t wake dad up, please.” Ten minutes later, I was back watching Kobe steamrolling all the other teams.

Time went by, and my passion for watching NBA games started to dissipate. Studies and work ate up my time, and I no longer had the energy to get up in the middle of the night. It’s difficult to rise so early and watch a game with one eye open, while not cheering loudly because your family is sleeping soundly. Moreover, by that time the Lakers had turned into the league’s whipping boys and their style of play had become dour and dull. In other words, I’d decided that sleep was preferable.

An invasion in the middle of the night

Late one night last month I was shaken from my bed by Israeli riot police pounding on the door to our house. At first, I thought the noise was from people in the building fighting over a parking spot again. But when I heard shouting in Hebrew and the neighbor screaming, and when I felt my room shaking from the blows to the door, I realized it was serious — another terrible incursion by black-clad, masked invaders.

I leapt out of bed in a panic, opened the door and was faced with around 20 masked riot police, armed with assault rifles and terrifying expressions. I was scared to death. One of them asked me, in Arabic: “What’s your name?” Using my most Ashkenazi accent, I responded: “My name is Sulimmm… Suliman. Who are you looking for, sir?”

He fixed his eyes on me intimidatingly, and asked whether I know someone by the name of Mohammed (the officer mentioned a family name as well, although I’ve forgotten it). I answered cautiously, “Sir, I’m new to the area, I don’t know anyone in the neighborhood or even in the building, and I don’t speak to anyone.” I tried talking without an Arabic accent and emphasized certain consonants, so that he would know I speak Hebrew well.

Unfortunately, my answers didn’t convince anyone. The masked cop invited himself into my apartment, pushed me against the wall and glanced toward my room. Two more officers accompanied him and asked me for my ID, as if it weren’t enough that I have to identify myself to them every day at the checkpoint.

I showed them my identity card and prayed to God that they’d leave. One of them scrutinized me to make sure that I was indeed the person on the identity card, then gave it back to me. I have no idea how he came to the conclusion that it was me, given that it was the middle of the night, I’d just been asleep, and looked somewhat like The Joker from “The Dark Knight.”

Eventually they left and continued on their way to intimidate the neighbors. I’ve actually gotten used to these monthly invasions, but this time it was different. It was so serious that I was afraid I’d lose control and react to the humiliation, which in turn brought the terrifying thought that protesting even a little would lead them to put a bullet in my head and tell the world that I had tried to snatch one of their weapons. Who knows? Anything is possible in this country.

I was still in shock from my house having been invaded by armed, masked men in black, and I couldn’t get back to sleep. So I decided to turn on the computer, and saw that an NBA game between the Golden State Warriors and the Cleveland Cavaliers was on. Watching brought back my childhood experiences, although unfortunately the game was nearly over. After it had finished, I realized that perhaps there’s an advantage to staying up during the night and not being woken by riot police knocking on your door. I also figured that the Cavs needed an immediate overhaul — just like our front door.