Next door to the plush Israeli settlements of the Jordan Valley live small Bedouin communities who must struggle for even the smallest bit of water. 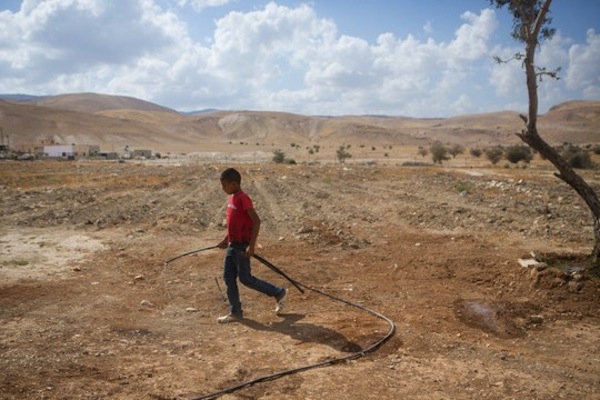 A young Palestinian boy from the West Bank village of Fasayil, Jordan valley, seen walking with a water pipe in the village. May 14, 2015. (Miriam Alster/Flash90)

More than 90 percent of the West Bank’s Jordan Valley region are Palestinians. Less than 10 percent are Israeli settlers. Yet when it comes to water distribution, it turns out, we see a different distribution: settlers are entitled to between eight and nine times more water, while Palestinian communities are subject to a policy of water deprivation. In fact, this is a policy of ethnic cleansing, whose goal is a Jordan Valley bereft of Palestinians.

The Jordan Valley is made up of nearly 400,000 acres, constituting 29 percent of the area of the West Bank. The valley is the richest, most fertile land reserve for the demographic and economic development of the future Palestinian state. Yet today, it is undergoing a process of ethnic cleansing, which is ridding it of its Palestinian residents.

In 1948 Israeli forces expelled the Bedouin community of Ein Gedi, near the Dead Sea, and re-established itself in the Jordan Valley. Through water deprivation and home demolitions, Israel wants to expel them once again.

A week and a half ago, my wife and I joined a group of activists who brought over water to the Fasayil encampment, adjacent to the Israeli settlement of Petza’el. The Bedouin encampment gets boiling water for one hour once every four days from a rusty, perforated water pipe, to which members of the community connect rubber hoses in the blazing sun.

There is something spine-tingling about standing in the scorching heat while facing Bedouin tents that are disconnected from water. The dozens of water bottles we handed out and the water tanker we brought were not enough to make us forget we are part of the state that deprives these women and children.

It is difficult to stand before Fasayil’s dried springs, while above them stands water infrastructure belonging to Mekorot, Israel’s national water company, which takes away from the wonder of the local springs and leaves bare terraces, built by Arab peasants over hundreds of years. 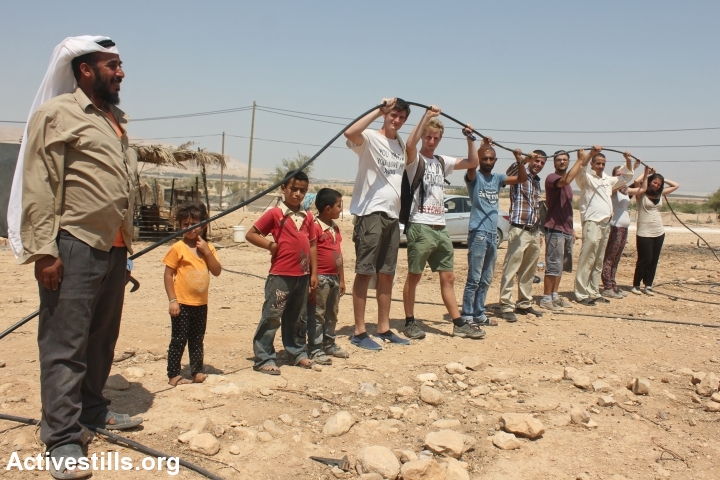 Today a large part of the Jordan Valley has been declared “open-fire zones,” nature reserves, Israeli settlements, and state land. Palestinians, who constitute the majority population in the area, are allocated less than 15 percent of the territory (which the state is also trying to slowly take away). At the end of 2014 and 2015, respectively, not a single construction permit was granted in Area C, where the Bedouin communities live, and where there is natural growth and living needs. On the other hand, the pace of home demolitions is only growing.

Meanwhile every Bedouin family in the Jordan Valley must spend a third of its income on purchasing water, which arrives in containers from Areas A and C. Last week those containers were confiscated by the Israeli authorities, as the families stood in the 100 degree heat.

Eitan Kalinski is a former bible teacher. This article was first published in Hebrew on Local Call. Read it here.