Israel is seeing a worrying resurgence of attempts to curtail and suppress dissent, particularly among anti-occupation and human rights activists. That process does not take place in a vacuum. 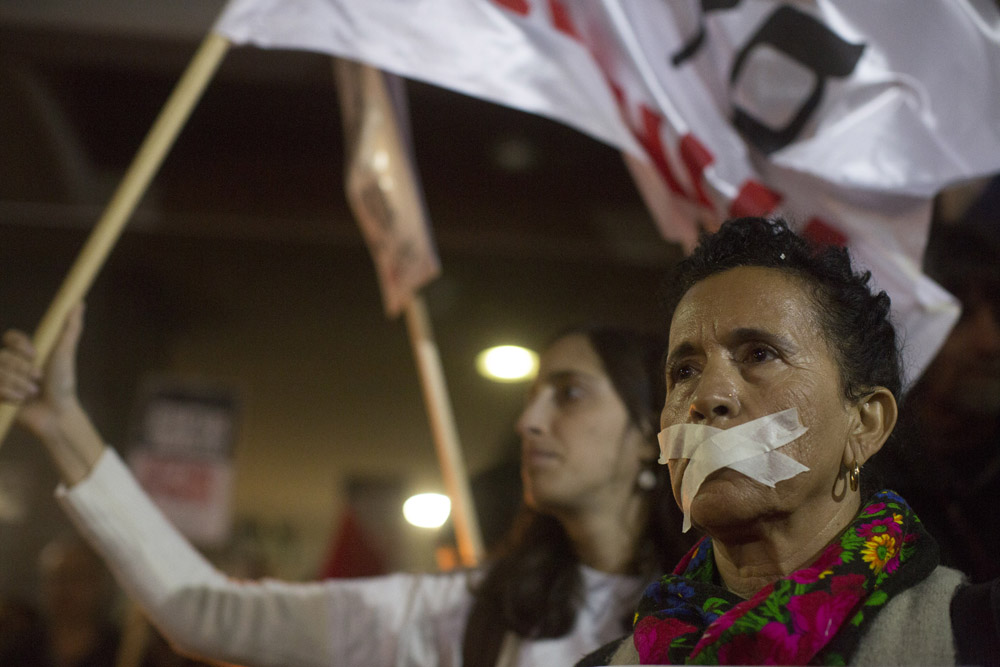 A protest in solidarity with human rights and anti-occupation organizations that had been targeted by right-wing groups and politicians in previous weeks, Tel Aviv, December 19, 2015. (Oren Ziv/Activestills)

The law singles out non-governmental organizations (NGOs) that receive the majority of their funding from foreign state entities (friendly European governments), and compels them to prominently declare their foreign funding in any publication or public engagement such as media appearances or events.

The law is not intended to create more transparency; Israel already has very strict transparency laws and regulations. Furthermore, the vast majority of the organizations in question already list their sources of funding on their own websites and report the information to the government, which also makes it available online.

The intended effect of the NGO Law is to send a dangerous and stifling message to the Israeli public. The message it sends is that the values espoused and advanced by these organizations — like B’Tselem, Breaking the Silence, and others — do not exist organically in Israel; lawmakers are saying that the values of human rights and opposing the occupation are being imposed on Israel from the outside-in, and only for the malicious purposes of harming the Jewish state, its citizens and its global image. (Of 27 organizations believed to be affected by the law, 25 were found to be left-wing or human rights groups. Full disclosure, my wife serves as legal advisor for several organizations that will be affected by the law.)

Earlier this year, Im Tirtzu, a radical right-wing organization with ties to the Israeli government, launched a campaign accusing prominent Israeli human rights organizations and their staff of being foreign-planted “moles,” citing the funding they receive from friendly European countries. The campaign even suggested that the “moles,” some of the country’s most prominent activists, were responsible for Palestinian stabbing attacks.

On another front, Culture Minister Miri Regev has been working for several years to curtail political dissent in the arts. Last month Regev sent questionnaires to artists asking them whether they perform in West Bank settlements, the first step in cutting funding on the basis of political conscious. A year earlier she warned, “institutions that delegitimize the State of Israel will not receive funding.”

Combined with a range of other pieces of legislation, policies and actions by government officials and extra-parliamentary groups, the cumulative effect of the NGO Law is to portray those working to end the occupation, fighting for equality and liberal democratic values as dissidents subverting the State of Israel itself.

“There’s no real price for somebody or an organization working against his country in order to isolate it in the world,” explained Erdan, whose ministerial responsibilities include Israel’s law enforcement agencies. “I’ve already established a legal team together with the Justice Ministry to create government-sponsored legislation in that context.”

“We understand that there is a need to draw a line between freedom of expression and democratic values, in which we believe and want to safeguard,” Erdan continued, “but if we want to convince the world that delegitimzation is unacceptable and for which a price must be paid, then it needs to start here in Israel.”

In the same speech, Erdan discussed the need to use Israel’s intelligence capabilities against individuals and organizations working toward a boycott and to end the occupation, drawing direct parallels to the methods Israel has used to fight terrorism, including searching for tangential and indirect ties to terrorist organizations, finding financial improprieties, smearing individuals, and shutting down bank accounts.

The consequences of a politics of fear 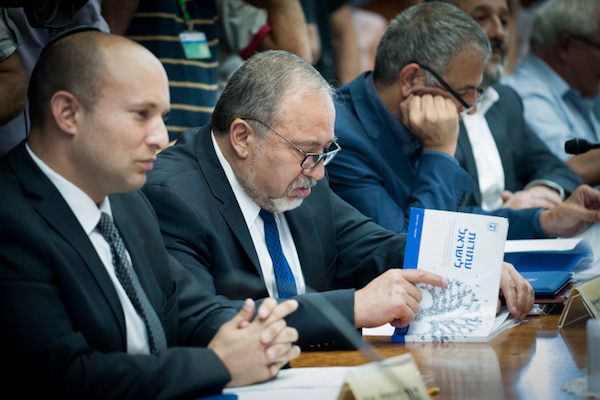 These developments are taking place for a reason: the Israeli political establishment has utterly failed to deal with the Palestinian conflict. Not since the miscarried premiership of Ehud Olmert has a senior Israeli politician even attempted to tackle the Palestinian conflict with any earnestness. Not a single politician, neither on the left nor the right, has attempted to resuscitate the two-state solution into relevance, certainly not taking into account the changes that have taken place since Oslo was first negotiated 20 years ago. No Israeli politician has offered the public any vision of a better future.

The appointment of Avigdor Liberman as defense minister is perhaps the most telling sign that this government has nothing better to offer — not to its own constituents, but more significantly, to the world. Because the Netanyahu government is comprised almost entirely of hardliners who oppose the two-state solution both in theory and in practice, it knows that it has little chance of gaining favor with an international community which has largely lost its patience.

Netanyahu, Liberman and Bennett know very well that passing the NGO bill into law, advancing other regressive legislation like a death penalty only for Palestinians, curbing free speech, approving settlement construction left and right, and targeting anti-occupation and human rights groups, will very likely agitate the international community, contributing to Israel’s creeping international isolation. They also know that the international community will only go so far, that nobody is coming to end the occupation, and that in Israel’s current domestic political climate they can only win.

To be fair, right-wing political movements are sweeping the Western world at the moment. From the anti-immigrant sentiments driving Brexit to the rise of right-wing parties across Europe to the political phenomenon in the United States that started with the Tea Party and somehow resulted in Donald Trump, what Israel is experiencing is not entirely unique. But by virtue of half-a-century of experience operating a fundamentally undemocratic regime, the occupation, Israel is ahead of the pack.