A new report from B’Tselem details how Israel has exploited the legal regime in the West Bank, trucking in hazardous waste to be processed in the occupied territory. 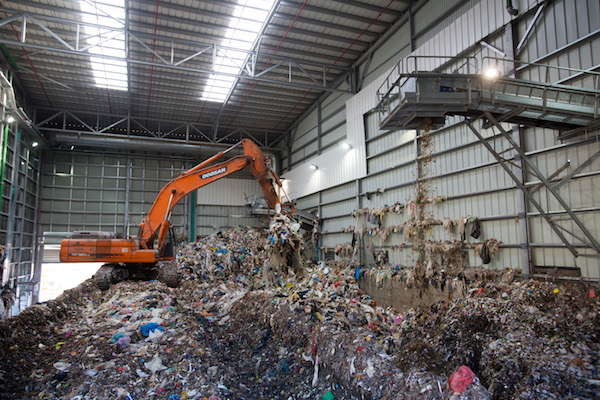 A bulldozer lifts garbage at the Greenet recycling plant in Atarot industrial zone, near Qalandiya, on June 16, 2015. (Sindel/Flash90)

Israel is taking advantage of less stringent environmental regulations in the West Bank in order to conduct much of its waste treatment in the occupied territory, according to a new report by Israeli human rights group B’Tselem, which it describes as a violation of international law. For example, the report found that an estimated 60 percent of all sewage sludge converted into fertilizer in 2015 was processed at a plant in the northern Jordan Valley. The Israeli government even provides financial incentives that make it more profitable to build waste treatment plants in the West Bank than in Israel proper.

The report, “Made in Israel: Exploiting Palestinian Land for Treatment of Israeli Waste,” identified at least 15 Israeli waste treatment facilities in the West Bank, including six that treat hazardous waste. “The number should be zero,” B’Tselem Executive Director Hagai El-Ad said.

The report focuses on five of those plants: four of which process hazardous waste produced in Israel, “including infectious medical waste, oils and solvents, metals, batteries and electronic industry byproducts,” and one that processes sewage sludge.

Precise information about the number of Israeli waste treatment plants in the West Bank, the amount and the type of waste processed, and the environmental impact is difficult to find. Israeli facilities in the West Bank do not publish their data, B’Tselem researcher Adam Aloni said. The Israeli Ministry of Environmental Protection and the army did not respond to B’Tselem’s freedom of information requests on the matter, according to the organization.

Trucking Israeli waste products, including hazardous waste and sewage, to treatment plants in the West Bank is also a violation of international humanitarian law, the law of war, which Aloni noted, “prohibits the occupying power from using the occupied area for its own benefit, for developing its own economy.”

Additionally, the Basel Convention of Transboundary Movements of Hazardous Wastes and their Disposal, ratified by Israel in 1994, prohibits “the export of hazardous wastes if the State of import does not consent in writing to the specific import, in the case where that State of important has not prohibited the important of such wastes.” The West Bank is occupied territory, however, not an independent state.

“It seems that Israel considers transporting hazardous waste into the West Bank as no different than transporting it within its territory,” the report states. At the same time, Israel takes advantage of the fact the West Bank is ruled under Israeli military law by exploiting the lack of environmental regulations. This is a case of “Israel having it both ways,” El-Ad said.

Palestinians have no influence over what types of plants operate in those areas of the West Bank under full Israeli military and civil control, the report observes. This also creates a total lack of transparency about accidents and pollution.

+972 Magazine asked an Israeli military spokesperson if and how Palestinian authorities are consulted in the planning and operation of Israeli waste disposal and treatment facilities in the occupied West Bank, and what environmental regulations apply to such plants.

A spokesperson for the IDF’s Coordinator of Government Activities in the Territories (COGAT), the Israeli military government in the West Bank, sent the following in response to the aforementioned questions:

The Civil Administrations authorities see great importance in protecting the environment in Judea and Samaria and invest a great deal of resources in this regard. Within this, projects designed to reduce air pollution, clean waste, sample water sources and more are being promoted and implemented.

Alongside the efforts of the Civil Administration, a systemic response and investment of additional resources are needed to deal with the environmental hazards and waste disposal sites in particular in the Judea and Samaria Area.