When Yoav Haifawi joined radical left organizations in Israel, he had no idea that the airport security services would begin searching him for explosives. A true story about the security services’ modus operandi. 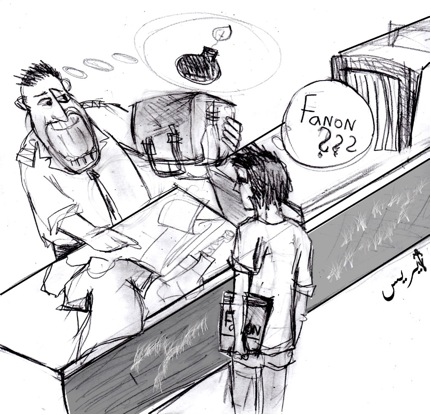 The following story is 100% true. It tells us a lot about the modus operandi of the security services, and not necessarily only in Israel.

During the seventies, I was active in The Workers’ Alliance – a leftist organization. It so happened that I represented this organization in several meetings and conferences in Europe.

In those days, the security services shared the left’s belief in the power of the word. According to this belief, just as the world was created by words, it can be changed through words. Thus, the security services put a lot of effort to monitor our words. On each “visit” to Lod’s Airport, while traveling in and out of the country, I would be taken to the airport’s police station the moment I presented my passport (like many other activists and opponents of the regime). They would search my bags and clothes, looking for any piece of paper that could indicate what I’m up to, where I am traveling to and with whom I met or will meet.

Human beings, by their nature, learn from experience. On one occasion they found a phonebook in my possession and took it away for further inspection. It was returned to me by mail weeks later, ragged and torn. I decided to make things easier for everyone and began searching myself before being searched, to make sure that I don’t have any piece of “personal” papers that may lead to questions or prolong the inspection.

Everything continued rather well. I left The Workers’ Alliance and joined Abnaa Al-Balad  (I did not do much traveling for political ends during this period), found a job in hi-tech and began traveling for work. However, once one was placed on the blacklist it was very hard to get out. I continued to search myself before arriving at the airport, and the comrades there continued to stop and search me every time. They continually came away empty handed.

I’m a quiet person by nature. I don’t like to complain and I was satisfied with the mutual security arrangements. But I learned that some other “names” on the blacklist belonged to managers and university professors. They had to travel often and were tired of the repeated searches. Eventually their complaints reached the press, and when they couldn’t bear it any more they petitioned the High Court of Justice through the Association for Civil Rights in Israel (ACRI).

I did not follow the details and was not particularly interested in the subject. That is, until one day in November 1989 when I was sent by my company to an important conference. I knew that the moment I present my passport, the border police will detain and search me. However, although I was ready for any number of strange occurrences, this time I was caught off guard. I noticed how the officer’s face became pale with fear as she looked at the computer screen after typing my passport number. Within a few seconds security guards surrounded me, carried my bag and escorted me into a special area that I had never been to before.

I didn’t understand what was happening. They are not looking for papers, I thought. One by one, they took the clothes from the bag and sprinkled a strange powder on them. They meticulously rummaged through every object – even the toothpaste, which they squeezed almost entirely out of the tube. There was no other explanation: they were looking for explosives.

I began to ask myself: “what kind of secret information changed my status from a ‘political dissident’ subject to traditional searches through to a ‘dangerous terrorist’ against whom one should apply all the most up-to-date chemical searches? Do they know things about me that I don’t know about myself? Is it possible that “the leadership of the world revolution” decided to move me from the political to the military wing and forgot to tell me and I’m only learning about it now through the security services?

One would expect the story to end here. I would remain ignorant and the doubt would eat me from within: “Who framed me?” Fortunately for me, at that time I was a volunteer at ACRI and accompanied one of their lawyers to Jerusalem.

The trip from Haifa to Jerusalem is pretty long. The urgent issue for which we were traveling was probably fairly simple and didn’t require a discussion nearly as long as the journey. The conversation between us switched from one subject to another. As I was looking for topics of conversation I asked the lawyer:

“By the way, what happened with the petition to the High Court against the blacklist? On my recent trip they gave me a hard time.”

“Well, the result is not bad at all,” he replied. We did not get everything we wanted, but we agreed on a compromise that satisfies us. The court endorsed our main argument that it is not acceptable that border security will be used for political means. Of course, we cannot object to them performing their primary duty, searching for explosives!”

It turns out that on the day of my traveling, I happened to be one of the first “suspects” who came to the airport after the implementation of the “new regime.” A regime that turned dissidents, by the stroke of a keyboard (and due to the “achievements” of ACRI and the “wonders” of the Israeli democracy)  from a “political hazard” to “potential terrorist.” That is why the passport control officer was so horrified when the new classification appeared before her eyes. This is why the security personnel took the search so seriously.

Over time, they got used to the fact that the new classification was essentially nonsense (some of them have probably realized that it was a form of political harassment) and the search for explosives became quick and easy, just as the search for papers before them.

My name was not deleted from the blacklist until 2003, after some other interesting experiences which I might describe another time.

This story was originally published in Arabic in the literary supplement of Al-Ittihad newspaper on 5/31/2013, and was later published in Hebrew on Haokets. The writer is the editor of the blog Free Haifa. The illustration is a gift from the artist Iris Bar.