As part of a new online campaign Israelis are giving voice to African asylum seekers who have been silenced, locked up and forgotten.

African asylum seekers jailed in the Holot detention center protest behind the prison’s fence, as other asylum seekers take part in a protest outside the facility in Israel’s Negev desert, February 17, 2014. (Photo by Activestills.org)

If you’re a Hebrew speaker you’re probably asking yourself how your Facebook feed suddenly filled up with quotes from asylum seekers in the “Holot” detention facility. Well, it’s because a new online campaign called “Voices from Holot” launched Sunday, allowing you to to share any number of quotes collected from interviews with asylum seekers from Eritrea and Sudan, all of whom are imprisoned in the “Holot” and “Saharonim” prisons.

A number of human rights organizations are behind the campaign, among them the Hotline for Refugees and Migrants, the Association of Civil Rights in Israel, Physicians for Human Rights, Amnesty International and Assaf. The campaign is scheduled to go on for a week, and it has been taking off so far. Hundreds of people have already shared statuses from asylum seekers. Among those sharing have been Israeli celebrities and writers.

“The Israeli public has frequently been exposed to discussions about asylum seekers, but almost never do they hear their feelings, thoughts and points of view,” Anat Ovadia of the Hotline for Refugees and Migrants explained to +972’s Hebrew-language sister site, Local Call.

“The goal is to expose the personal stories, the thoughts and daily experiences of the detainees, with the assumption that it’s more difficult to hate and fear or continue to be apathetic toward them when you read their testimonies in the first person,” she continued.

Those behind the project hope that the thousands of people currently being incarcerated without trial, and who have been effectively silenced, “will be heard and not forgotten.”

Speaking by telephone from Holot, Anwar Suliman said: “This project is important to us. It is one part of the actions we asylum seekers at detained at Holot have been initiating for a long time, in which we try and show the [Israeli] public how we are living here.” 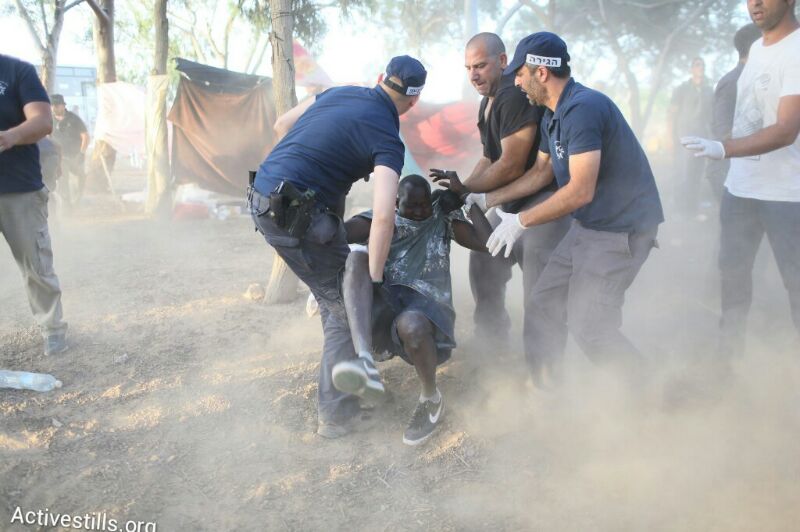 “This is a real prison,” he continued. “They don’t let people live properly, like humans. There are international laws that are supposed to provide us with protection but they are not being implemented.”

The situation in Holot is difficult, Suliman added. “I’m speaking to you right now from the room in which my friend and I sleep and live. It’s very cold here and there is no heating. The feeling is as if they are punishing us, for no reason. We are being punished just for coming here.”

The campaign is directed at the citizens of Israel, not the government, Suliman explained. “It’s important that we understand each other. We are in a difficult situation now but one day we want to return to our countries and to help our societies. Look at us as people who can lift ourselves up and become strong, and one day help others.”

The following are a few of the statuses people can share, translated from Hebrew into English (read them all in Hebrew):

After my older brother died in prison in Eritrea, my younger brother and I fled. He managed to get to Europe and I got to Israel. He studied and is working and I’m in prison and I don’t know what will become of me. (Gabrasadek, asylum seeker from Eritrea, imprisoned in Holot) #HolotVoices

Ten years ago they attacked my village in Darfur, killed my father and brother in front of me. I fled and haven’t seen my mother or sister since. They tell us they want us to go back, but to where? To a country that wants to kill us? To a country that that murders us? That burns our villages? Where are we supposed to return? (Muhammad Ali, asylum seeker from Sudan, imprisoned in Holot) #HolotVoices

My dream is that there will be peace in Sudan and that we will be able to return and rebuild our beautiful country, but meanwhile I am here and asking to be treated with dignity. (Muhammad, asylum seeker from Sudan, imprisoned in Holot) #HolotVoices

They said we are cancer, that we are criminals, that we carry diseases. I invite you all to come speak with me, to hear my story. You’ll see that I am just like you, a person, who wants to live. (Asyam, asylum seeker from Eritrea, imprisoned in Holot) #Holot Voices