Palestine, from the Mediterranean to the Jordan river, does exist and will continue to exist. And the first people to understand this should be the Jews. For homeland and political sovereignty are two distinct concepts. 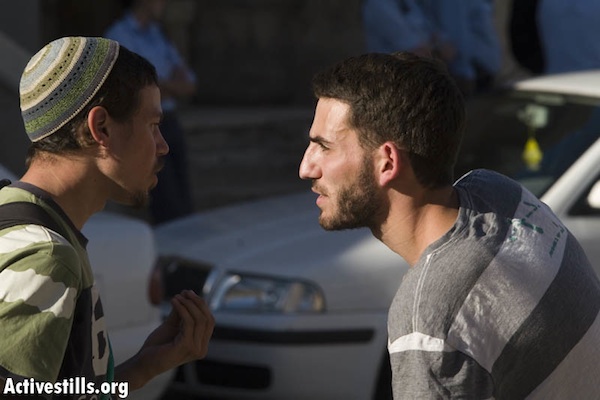 Yesterday I was speaking with a young graduate student in Islamic studies, an orthodox Jew, who told me that the question arose in one of his courses, “Where is Safed?” to which the professor replied, “In Palestine.”

His story reminded me of the one told by the Palestinian-American, Ahmed Moor, who, when telling a fellow undergrad that he and his family were from Palestine, was met with the reaction, “Palestine doesn’t exist.”

Well, Palestine, from the Mediterranean to the Jordan river, does exist and will continue to exist, even if the State of Israel is recognized by the entire world — including the Palestinians themselves — as a legitimate and sovereign state. And the first people to understand this should be the Jews. For Jews have called the same land that the Palestinians call “Palestine” Eretz Yisrael/the Land of Israel, even when their communities in Palestine were tiny. For homeland and political sovereignty are two distinct concepts.

For the Palestinians, the State of Israel will always be at best a political entity whose founding ideology was foreign to Palestine, whose founders conquered Palestine and expelled most its inhabitants, and who allowed the remaining inhabitants to remain as second-class citizens under a military government while their lands were taken away. Israeli Jews at best will be legitimated as Jews of Palestine. And there is historical precedent. Poland remained Poland for the Poles, despite disappearing after it was partitioned by Austria, Prussia, and Russia. I am not referring merely to the Kingdom of Poland, I am referring to the homeland of the Poles, “the sacred landscape,” to use Meron Benveniste’s term.

People of good will on both sides recognize that their narrative is not shared by the other. But that does not mean that each should be compelled to give up their narrative. As an Israeli Jew, one sympathetic and supportive of the Palestinian cause, I recognize the continuing existence of Palestine, not on some truncated spots of the West Bank and Gaza, but on the entire land of Palestine. LIke Benveniste, I feel saddened by the Israelis who don’t know what they have lost by attempting to wipe this Palestine off the map. Fortunately, that attempt is doomed to fail, as long as Palestine continues to be remembered.

From a purely visceral standpoint, it is sometimes difficult for me to hear references to Palestine, because I was raised to believe that anybody who talked about “Palestine” wanted to drive my people into the sea. That, of course, is rubbish. I don’t think it is wrong or not politically correct to talk about Eretz Yisrael, or to treat it as the promised land of the Jews. That has nothing to do with the regime that governs the Holy Land.

As a religious Jew, I believe that the Jew qua Jew has three homes: the state of which she is a citizen; the Jewish community of which she is a participant, and the land of Israel. Jews do not need political sovereignty in an exclusivist ethnic state in order to feel at home in that land. In fact, increasingly I am feeling less at home in the State of Israel, than in the United States.

But I do feel at home in my home in Jerusalem in Eretz Yisrael, and I would like to be welcomed by Palestinians as a Jews, and, yes, as an Israeli, living in Palestine. In fact, I would like both homelands to be shared homelands.

Recognizing the State of Israel, and recognizing the rights of Israeli citizens of that state, does not mean — should not mean — relinquishing the notion that the State of Israel occupies part of the historic homeland of the Palestinians. As an orthodox Jew I believe that the West Bank is part of Eretz Yisrael, as is southern Lebanon and parts of Syria and Jordan.But that means nothing with regard to the question of the best political regime(s) for Eretz Yisrael and Palestine.

As for the Zionists, despite all their efforts to wipe all traces of Palestine off the map, and to replace it with the State of Israel, they were successful only in getting rid of mandatory Palestine. Palestine as homeland remains as long as the Palestinians and others honor it in their collective memory.

Jeremiah (Jerry) Haber is the nom de plume of an Orthodox Jewish studies and philosophy professor, who divides his time between Israel and the United States. This post was originally published on his blog, The Magnes Zionist, on February 3, 2013.