The keffiyeh has long been the dominant symbol of the Palestinian struggle. In honor of International Women’s Day, we brought together women to give the traditional embroidered Palestinian dress the respect it deserves. 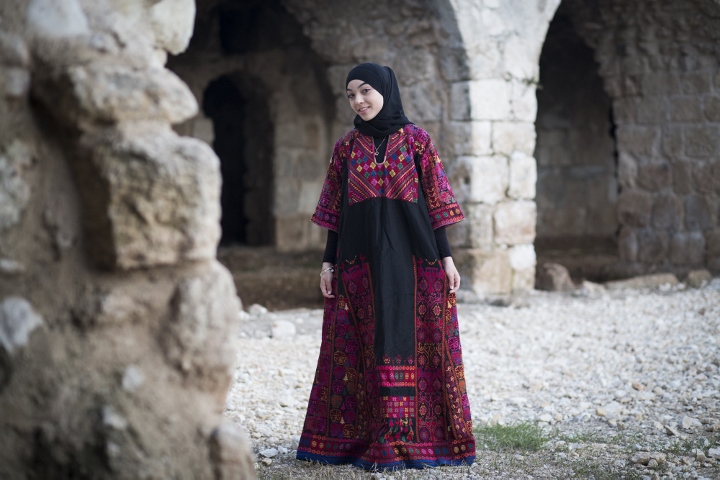 A woman is prettier, more feminine and more attractive when wearing a dress. That’s what they taught us, and I won’t get into the question of who is behind this theory and whom or what it serves. What is certain is that women have always held in special regard this specific article of clothing, which in some cultures represents hiding the beautiful body of a woman, and in other cultures to highlight and accentuate that glorious body. In both cases dresses represent the social status, economic status, strength and taste of the woman wearing them.

So it shouldn’t be surprising that just like in all of society, in the world of clothing (not fashion) women’s clothing fight for their place in the closet of public consciousness. That is the unique situation that occurs when said society is in a fight for survival, as a national collective fighting for national recognition and national liberation. In such a situation, what is thought of as more patriotic: the masculine or the feminine?

That is the situation in Palestinian society. Masculine items of clothing, like the black and white keffiyeh, have become symbols of popular struggle, of nationalism and Palestinian identity, which has taken its place on the world stage. Young women, too, have adopted the keffiyeh, worn around their necks as scarves at demonstrations, marches and public events. But the need for an authentic feminine Palestinian symbol has quickly risen, which has led the traditional embroidered Palestinian dress, “Fustan,” to be liberated from the back of the closet to its current rebirth among Arab women. Slowly slowly the long and heavy “thoub” dress has become a symbol of female pride and liberating creativity. 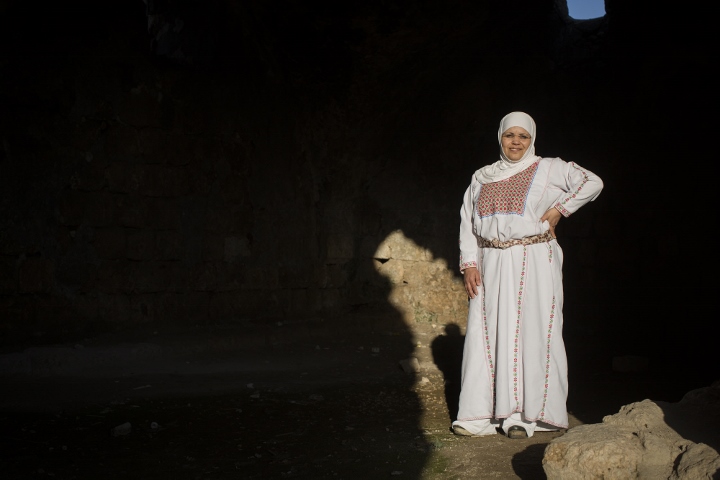 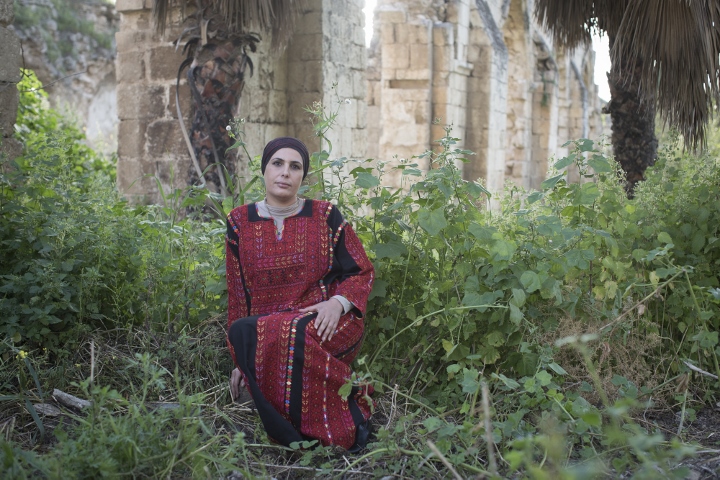 The natural and seemingly engineered shapes, embroidered with silk thread and with the patience possessed by only women, turn any black or white fabric into a piece of art. A cross-stitch and another cross-stitch, one next to another, long nights, line after line and the dress is covered in embroidery that tells a local story.

Once the embroidered dress indicated the personal status of a woman: married, single, widowed or divorced. Over time the dress began to speak politics. Dresses included designs against the evil eye and colors from nature and the embroiderer’s environment.

A form of feminist activism

As far back as I can remember I have been enchanted by this embroidery and I have no idea why. For 20 years I have been collecting embroidery, and I have spent hours on end choosing fabrics and designs for dresses, which with the opening of the NGO Na’am (supporting Arab women in Lod, Ramle and Jaffa against gender violence) also became an initiative to support the embroiderers financially. We quickly put on our first exhibition under the banner, “embroidering for change,” an exhibition that started as a response to the ban on women without legal status working in Israel. In order to embroider you only need good taste, needle and thread, and that’s still legal — so let’s get to work, I told a few of them.

Within five years more than 40 women joined the project, Jewish and Arab friends began buying gifts from the embroiderer women as an act of female solidarity and struggle. Women from small villages and other regions started sending their work, and we even have two young women from Gaza who create breathtaking Palestinian designs. All are working women who make do with a little and want to make a living with dignity. As Umm Yousef, an embroiderer from Bil’in, once told me: “One piece of gravel strengthens a building.” 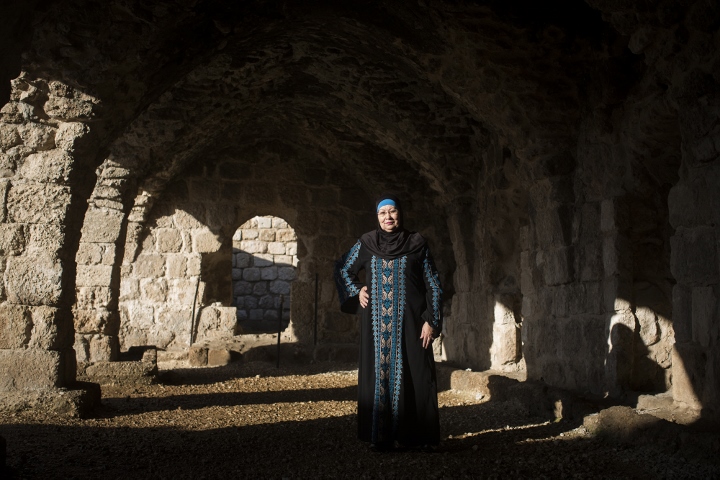 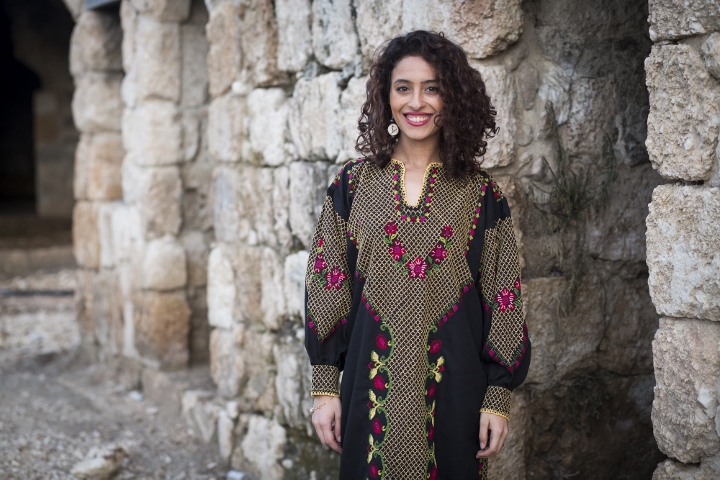 A dress is indeed more than just a piece of clothing, it seems, especially if it is antique and carries the history and struggle of an entire nation, the hard work of women, and great happiness. With that consortium of forces, my friends and I decided to create a collage of amazing women, traditional embroidered Palestinian dresses, and to let each woman choose a special place in their city to be photographed. For most of them it wasn’t hard to choose: Khan el-Hilu in Lod, the white tower in the old city of Ramle — two sites at the heart of the old city and the ghetto compound in which the city’s residents were imprisoned at the start of Israel’s military rule over its Arab citizens in 1948. We wanted to send a single, strong message, that there was once life here: women are the life of the city, and together they can make this place so much better.

I contacted all of the women I know in the area, all of whom are activists in their own field, and each of whom works on one dimension or another of feminist activism — the murder of women, home demolitions, the war on poverty or political activism. Groundbreaking school administrators, Muslims and Christians, with head coverings (hijab) or without, young women and older women — everyone would be together. 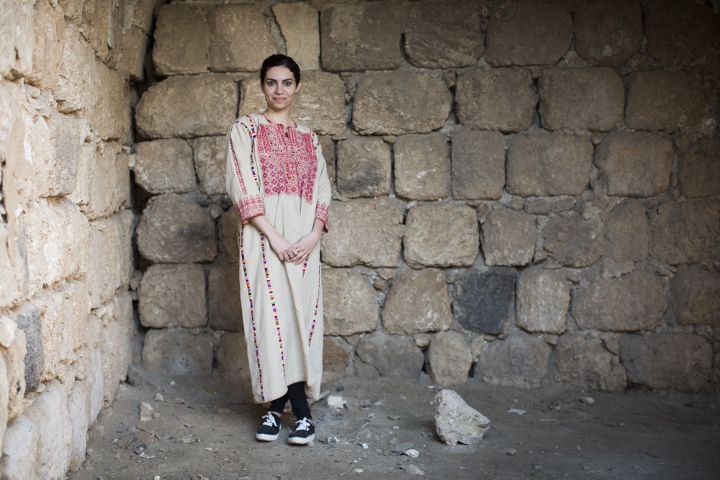 I gathered my own and my friends’ dresses for the project, found a (volunteer) professional photographer — our very own Oren Ziv who happily joined the project. During the photo shoot day I must have said dozens of times, “you’re so pretty like that,” to each woman who hesitated to be photographed, I reconciled with women who didn’t exactly support me in the past, and I buried my ego in the furthest possible place in honor of International Women’s Day. I heard interesting life stories from our models: one told us that at her wedding the photographer never showed up and that she has never felt so important as during our photo shoot. Another barely convinced her husband to let a man photograph her, and that only on the condition that the photo be a group photo. Another one was in pain from the murder of her young neighbor the day before. Yet another brought a famous dress belonging to her step-mother, a dress that came out of the closet only for celebratory occasions, and another woman brought out a dress that she had not worked on since her partner passed away. 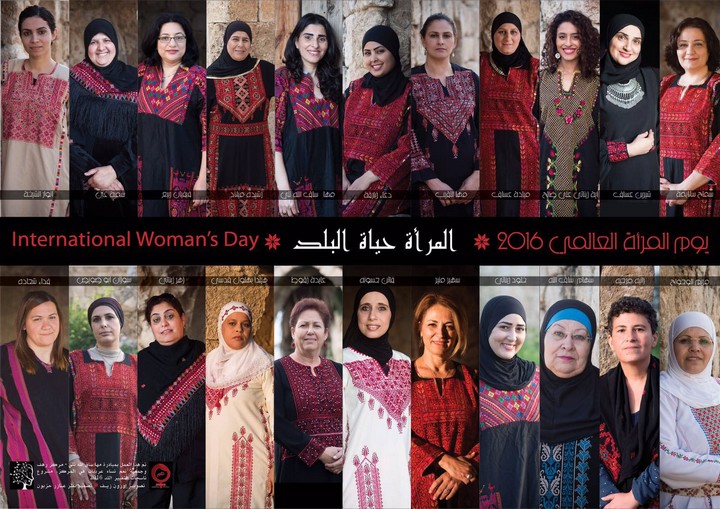 Like any project that I get myself into I started questioning what I’m doing and why. Each woman who came to contribute her photo made me happy, I took advantage of Oren’s generosity by documenting the process and moments for the organization. Why not, right?

We all decided that everyone would change their Facebook profile photo at 10 p.m. the night of International Women’ Day to their photo in the dress. Except we realized that some of the older women in the group didn’t have Facebook. So we conscripted their offspring to the campaign.

And so it was, on Women’s Day earlier this week, at 10 p.m. exactly, we decorated our pages with our group presentation of the dresses, and our profile photos became especially colorful. Lots of excitement, great pride and a lot of likes and shares filled our hearts with happiness and collective strength like I have not experienced in a long time.

I know that I often write of difficult stories and with lots of anger and criticism about this world, in which women still need a special day of the year in order to emphasize to mankind that our struggle for liberation is still incomplete. I see each of you, Arab or Jew, Palestinian or Israeli, man or woman or anything in between, as true partners, just like in embroidery each thread is important and every color has a role — that’s how I see our struggle for women’s rights, freedom, self definition and the right to life. That is what International Women’s Day is for me: sometimes it pokes like a needle and sometimes it’s as beautiful as a dress. 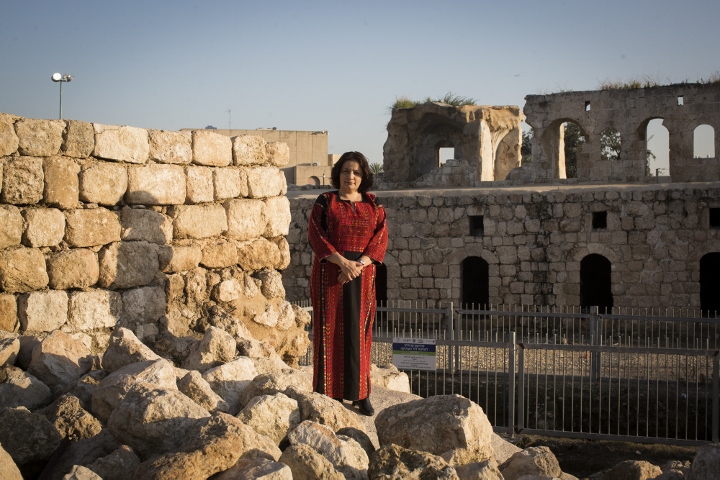