I was sure that with all of their past experience, Israeli police would finally learn how to tell a decent lie. It turns out that the boys in blue could stand to learn a thing or two.

I spent the last week in Amsterdam, where I hoped to disconnect and forget about the racism and the violence of Zionism, to see Ajax — my favorite soccer team since childhood — defeat a formidable opponent in its home stadium like in the good old days, and for a bit of nostalgia.

The first goal was achieved. The second one? Not so much: Messi destroyed us fairly easily. On game day I witnessed an arrest in real time: three Dutch police officers jumped on a suspect mid-crime at the central station. How strange it was to see a quiet arrest — no batons, tasers or pistols drawn. The arrest was so non-violent that the handcuffed suspect didn’t utter a sound — as if he was an equal party to the arrest.

This kind of thing is so far from the reality in Israel that I found myself making an effort to tie it into our everyday experience. “Look at that,” I said to my friend. “And now imagine this kind of thing happening where we come from, and that the suspect is Arab.”

It took me 15 minutes after landing to get caught up on the events of the past week. Between all the violent incidents only one thing managed to (still) surprise me: Israeli police are such terrible liars that is simply embarrassing. I was sure that with all of their past experience, the boys in blue would finally learn how to tell a decent lie. How disappointing.

The site Arabs48 gathered all the press releases to the Arab media after the shooting death of 22-year-old Khir Hamdan (Arabic). The statements, which were given by police spokesperson Luba Samri in terrible Arabic (as expected), reflect the police’s pathetic attempts at whitewashing the killing. In its first message released at 2:23 a.m., police announced that the “22-year-old who was killed attacked the police with a knife, and after they shot several warning shots in the air, police were forced to shoot him.” In the second statement, released at 3:27 a.m., the police stated that they were bringing in reinforcements “due to high tensions between two big families in the village.” Not because they just shot and killed a visibly upset person who did not really constitute a threat to them. This, of course, is just a minor detail.

Next. At 9:06 a.m. the police once again released a statement that claimed that tensions in the village stems from ill feelings between two families, as well as due to the death of “the man,” despite the fact that “warning shots were fired in the air before he was wounded.”

At 10:46 a.m., after the video of the shooting death was revealed, in which anyone can clearly see that the officers were not really interested in firing warning shots in the air, police released another statement in which it claimed that large forces are still deployed throughout the village due to “the conflict between two large families as well as due to the death of the 22-year-old man.” They also noted that police will continue to partake in heroic actions “with determination against any person who chooses the path of violence.”

At the same time, according to Arabs48, the statements released to the Hebrew press put an emphasis on police attempts to end the rioting and bring order to the primitive Arab village. 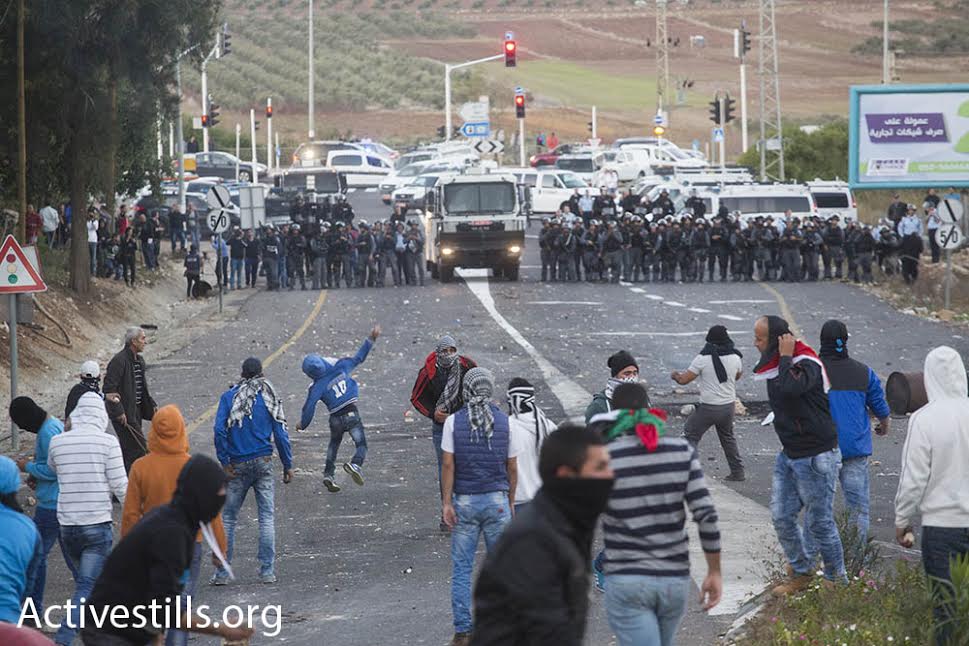 Arab youth clash with Israeli riot police in Kafr Kanna, Israel. The protests come less than a day after an Arab man from the village was shot and killed by Israeli policemen. Security cameras caught the man attempting to attack the policemen, as well as the shooting, which took place after the man had already backed away considerably. (photo: Oren Ziv/Activestills.org)

Due to the fact that most of the people reading this likely do not read Arabic, and thus cannot see the garbled police texts with their terrible spelling and poor syntax, there is no point in analyzing the amateurism of the police in their use of Arabic. However, there is reason to look at its amateurism when it comes to the whitewashing its deeds. Enough already. Want to whitewash? Learn how to do it properly.

Why are they striking?

What were they thinking? That no one would see the video? That people wouldn’t see Hamdan backing off when the police van’s door swung open? That they wouldn’t see how the police officer shot him in his upper body in order to kill, verified the kill and then dragged (rather than carried) Hamdan along with the other officers as if he were a sack of potatoes? That no one would notice another poor attempt by the police at whitewashing, and how they only brought up the issue of an investigation after being caught red-handed?

It is wrong to say that top government officials are responsible for “shedding Palestinian blood” — a claim that has been written elsewhere. This kind of phrasing, despite its moral facade, has a sterile connotation. And believe me when I say that there is nothing sterile about a minister who calls on his police officers to forget the judiciary and just kill people. This is not the “minister” of public security; he is the Godfather of public security. Only in a place where morality is so twisted (like Israel or Sicily) can so many people who lack qualifications, not to mention a moral compass, reach such high positions.

The Israeli public does not understand why Palestinians in Israel go on strike or protest. How tragic that they cannot understand such a simple concept: the Israeli government has given its police a green light to murder Palestinians in the streets, and then pretend we are idiots and lie so blatantly. We shouldn’t protest and strike over this? We all see the horrible crimes committed by these police officers, and know exactly who allows them to act this way.

And you, Khir, rest in peace. Your name joins a long list of the victims of Zionism on ’48 lands, East Jerusalem, the West Bank and the Gaza Strip.

This article was first published on Local Call. Read it in Hebrew here.

More on the Hamdan killing:
PHOTOS: Protests in northern Israel after police kill Arab man
WATCH: Police kill would-be attacker as he runs away
Netanyahu: Those who call to destroy Israel should have citizenship revoked