The country’s top investigative news program airs a hidden-camera sting operation carried out by a shady right-wing organization, and fails to ask the tough questions and give the necessary context.

The entire episode was based on a story handed to Uvda by a relatively new and secretive right-wing NGO, comprised of former military personnel, and which aims to “expose the true face of anti-Israeli organizations” – i.e. left-wing groups working against the occupation.

Its juicy revelation: the right-wing organization followed Ezra Nawi, an activist who has dedicated the past few decades of his life to protecting Palestinians in the South Hebron Hills from settler and state violence.  They secretly recorded as he bragged about informing on Palestinians who sell land to Jews, to the Palestinian intelligence service, so that they can be tortured and executed by Palestinian authorities – according to his own words. This, according to Uvda and the right-wing NGO, is proof of Nawi’s questionable morals, and by proxy, those of anyone involved with him and of the entire Israeli Left — somehow. As Edo Konrad mentioned here yesterday, the highest echelons of Israel’s government were quick to jump on board. 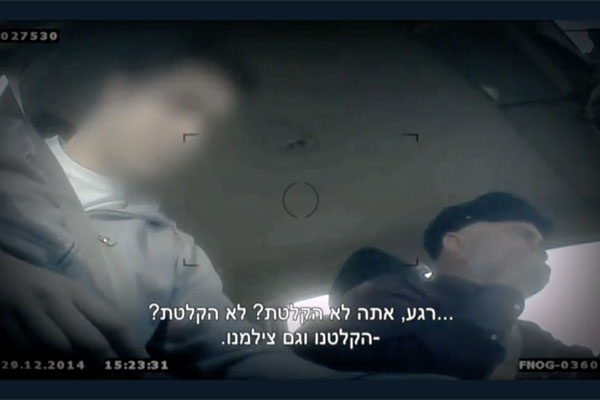 Undoubtedly, talking about and even rejoicing at the possibility of the torture and execution of others – as seen in the tape – is deplorable. However, there are some very serious problems with this piece of investigative journalism that put into question the entire basis of its findings. There are no answers to the question of who is backing this new NGO that did all the actual reporting, and how it funds its extensive work and expensive surveillance equipment. The organization’s website doesn’t provide any answers either.

But more importantly, Uvda’s researchers ignored some crucial pieces of information which must be addressed. First of all, although Prime Minister Netanyahu promptly accused the left and the Palestinian Authority of the murder of innocent people, the show, with all its undercover work and investigative resources, was not able to prove that any person was actually harmed by Nawi’s actions. It is true that Palestinian law prescribes capital punishment for anyone convicted of selling land to Israelis, but the show made no mention of the fact that the Palestinian Authority has not carried out a single execution since Mahmoud Abbas came to power in 2005, more than a decade ago.

Torture, on the other hand, is commonly employed by the PA’s security forces (and by Israeli ones), but for the most part it is used against political adversaries of Abbas’ Fatah movement and against people designated as security threats by Israel and “handled” by the PA at the behest of Israel security forces —part of the famous “security coordination” between the two. While Nawi boasts sending people into the Palestinian torture chambers, Uvda was unable to find a single person who was actually arrested or tortured as a result of Nawi’s actions. Finding such people who were sent there by Israeli officials would be much easier.

Yet another failure in Uvda’s reporting is the baffling lack of context it provided for the story. The missing context of this dramatic episode is the military occupation of the West Bank, where since 1967 Israeli settlers and state authorities have worked hand in hand to achieve one central goal – the expropriation of as much land as possible, all while kicking as many Palestinians as possible off of that land.

More specifically, the backdrop of this story is the South Hebron Hills, an area where disempowered and impoverished Palestinian communities live in caves, tents and tin huts in the middle of the desert, and have for decades been trying to non-violently repel the army’s attempts to demolish their meager homes for the benefit of settlement expansion.

Ta’ayush, the group with which Nawi volunteers, has taken it upon itself to do the unrewarding, dedicated, marvelous and difficult work of helping these communities in their struggle for survival, documenting and protecting them from settler violence, and more.

With this in mind, let’s get back to the Uvda story. Nawi, one of the more prominent activists doing this type of work, was being secretly recorded when he got a strange call from a stranger, a Palestinian, offering him to sell him land adjacent to Israeli settlements in the South Hebron Hills, and who suggests that Nawi help him find Jewish buyers. Such sales, by the way, are often times made by people who claim to own the land, claims that Israeli courts have on numerous occasions found to be fraudulent.

As Nawi stated in a comment published as nothing more than an afterthought on the show, he suspected someone was trying to set him up, to frame him and make his Palestinian partners think he was collaborating with Israeli settlers. After all, it is quite unlikely that anyone who knows anything about Nawi would think even for a moment that he might willingly participate in such a dubious deal. Looking back at it now, it is an unlikely coincidence that the would-be land broker just happened to call Nawi while his was being secretly filmed and recorded.

So what did he do? That is, aside from talking trash about how people like the land broker should be executed? What did actually do? He called his Palestinian friends from the area, informed them of the call he got, and together they decided to turn the supposed land broker over to the legally entrusted authorities who deal with such matters. They tried to set a meeting with the man, but he then disappeared and stopped making any contact with them. Naturally, he was not arrested, nor was he tortured, let alone executed.

To sum up: what we have here is a report on prime-time television, which enjoys considerable journalistic credibility, that was in fact made by a shady covert NGO of unknown origin and not seriously criticized by the news desk that produced it. The report aims to blacken the entire Left, led to a series of government statements against the Left, all based on one person, who – aside from saying some terrible things – was not shown to actually have harmed anyone. Someone who was only trying to protect himself from being framed and working with his friends to try and have a suspicious man arrested by authorities. All this while the true story – of continuous land grabs and settler and army brutality – goes completely untold.

Those campaigning against the Israeli Left and human rights organizations should be proud of themselves. Well done.

A different, longer version of this post was published in Hebrew on Local Call.