Avi Buskila, the new director general of Peace Now, may come as an outsider to the world of peace organizations but there’s one unique item on his resume nobody else can lay claim to.

Twenty years ago I was a deputy company commander in the West Bank city of Hebron. The first Netanyahu government was about to transfer control of three-quarters of the city to the Palestinian Authority. The settlers were furious — the tension in the occupied city was palpable.

After Rabin’s assassination, the Hebron Agreement was seen as vital for demonstrating progress in the Oslo process under the new Israeli prime minister, who had so ardently opposed any withdrawals just a few months earlier. It was considered a significant achievement and if it were to fall apart, the world feared, so would the entire peace process.

One morning I was sent for some reason or another to Gross Square, known by Palestinians as Vegetable Market Square, which was still bustling and lively at the time — before the army shut down most of the Palestinian shops and banished the grocers and store owners.

We were standing near the entrance to one of the settler compounds when suddenly we heard a burst or two of automatic gunfire coming from another side of the square. I was able to see an Israeli soldier shooting (from a sitting position, no less) toward the crowds of Palestinians, and then I saw two other soldiers jumping on him.

It turned out that a setter (not a settler in the city of Hebron itself) who opposed the Hebron Agreement had decided to mimic Baruch Goldstein and commit a mass murder hoping to set the city alight and prevent the withdrawal of Israeli troops from it. His plan was foiled, however, by an officer from our battalion who happened to be standing behind the shooter, pounced on him, and arrested him without anybody getting seriously hurt — not the shooter and not any of the Palestinians in the square (six Palestinians were lightly wounded). The only thing left for us to do was to deal the crowd that had formed to see what happened.

The Goldstein Massacre (or the Ibrahimi Mosque Massacre) sparked a series of Palestinian revenge attacks and irreparably challenged the Oslo peace process. The incident that I witnessed only held public significance for a few days at most. The officer who stopped the shooter, Avi Buskila, was the hero of the day, the man of the hour. He was on the front page of newspapers around the world, from Yedioth Ahronoth to the New York Times. Netanyahu even personally presented him with a certificate of appreciation. 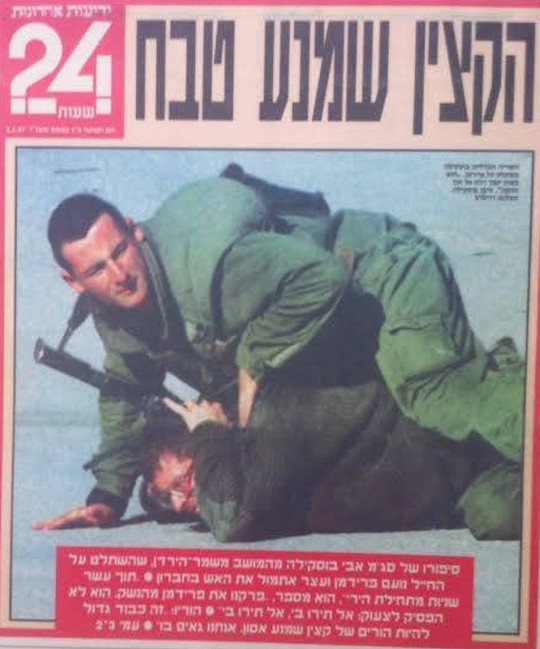 Not too long after that day we redeployed from parts of Hebron (I personally dismantled one army position myself). It was, of course, an illusion. The occupation of Hebron never ended. But that’s a whole other story.

Avi Buskila was appointed as the new director general of Peace Now this week. To the best of my knowledge he has been active in the Pride community but doesn’t have a long history with peace movements. Nevertheless, he has one entry on his resume that few others in the peace camp can lay claim to — he personally saved the Hebron Agreement with his own hands.