The IDF grants arrest and other powers to civilians in West Bank settlements and outposts but fails to ensure they are held accountable. In essence, the army has privatized law enforcement. 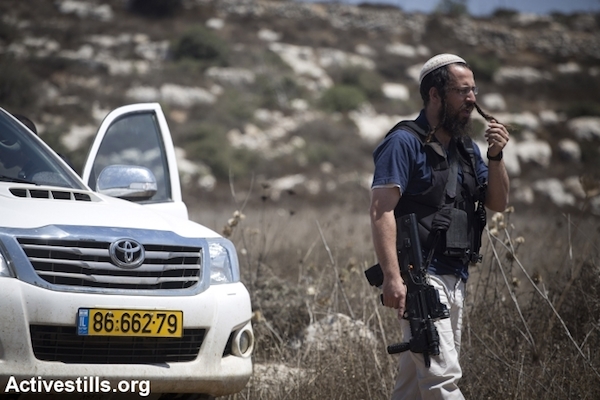 Privatizing the state’s use of force should be a source of concern to us all. Such a process – and particularly when the powers are transferred to a body with a clear political agenda – creates uncontrolled militias. This is the process that has occurred in the West Bank due to the army’s policy of delegating some of its law enforcement powers to civilian security coordinators, as discussed in Yesh Din’s new report, “The lawless zone.”

The institution of the civilian security coordinator in itself is not new; it is part of a spatial defense approach that predates the establishment of the State of Israel. This function was formalized in the Local Authorities Law (Arrangement of Guarding), 1961. That law established that the security coordinators and guards were to be accountable to the police or the army. In the West Bank, where this mechanism was introduced by a military order in 1971, is more complex.

While we were preparing the report, the IDF Spokesperson was forced to admit that there is no document establishing procedures for the supervision and assessment of security coordinators, along the lines of the procedures relating to army officers, for example. The Spokesperson also confirmed that it has no information about disciplinary proceedings against coordinators or against members of their guarding units. Yet according to an Operations Division order, the security coordinator bears a “responsibility to soldiers undertaking a guarding function in the area, including briefing them on their arrival, monitoring the execution of their task, and attending to their welfare.” It is also worth noting that then-deputy state attorney Shai Nitzan stated in an official letter that commander-commandee relations are not applicable to the relationship between security coordinators and soldiers. This claim is contradicted by the experience of many soldiers who have reported such relations.

The transfer of military powers to civilians is particularly serious when it is to a group of civilians with a distinct ideological viewpoint, who are motivated by an aspiration to seize additional Palestinian land and who refuse to recognize Palestinian land rights in the West Bank. The transfer of quasi-military powers to an ideological group, some of whom do not recognize the State of Israel and some of whose leaders have called for the elimination of the democratic regime, can only be seen as the army waiving its authority to exercise power. Or in other words – privatization.

Been there – done that. When the Finance Ministry attempted to privatize Israel’s prisons and build the first prison managed by a private company, the High Court struck down the law. Justice Ayala Procaccia explained that such privatization creates the clear potential for the violation of human rights: “the private body that receives a governmental authority carrying the potential to violate the core of individual rights is not rooted in the framework of rules of action and criteria that dictate the standards of use of the institution power of authority and guide the actions of state organs. It did not grow up and was not educated in this framework; it is alien to its concepts, and it has never internalized the theory of balances in the use of governmental power.”

Anyone seeking a practical example of all these defects need look no further than the security coordinators. By the way, we should note that the state is currently attempting to privatize another arm of the law enforcement system, namely the prosecution: it is proposing to employ attorneys from the private sector as prosecutors who will decide whether or not to serve indictments. The Association for Civil Rights in Israel has asked the attorney general to halt this further attempt at privatization: responsibility for the penal process must remain entirely in the hands of the state.

To sum up: when the state – and remember that in the West Bank, the Israeli army acts as the sovereign – transfers any of its powers to use force to private individuals who are accountable not to the army but to their settlement, it damages its own standing, the ability to enforce the law, and above all – the occupied population whose person and property it is obliged to protect. Accordingly, Yesh Din’s report urges the army to correct this flaw and to appoint security coordinators who are not settlers but officers in the standing army; and to ensure that they are accountable to the army and not to the settlements. In a nutshell: the army should take back its monopoly on the use of force.

Related:
Settler violence: It comes with the territory
Sheriffs of the land: Meet the settlers with military authority