Shattered televisions, clothes and food scattered everywhere, clogged toilets, walls covered in drawings, stolen jewelry. These are the scenes that awaited Palestinians in Gaza upon returning to their homes that were used as IDF military posts.

The devastation is total. Furniture is overturned, clothes are torn out of the closets and scattered around. Though I try to avoid it, I trample on them as I walk over broken glass, food scraps and cartridge cases. The walls are scribbled with Hebrew writing; large maps of the surrounding houses, along with guard schedules. I am inside a house that seems to be the one from which Salem Shamaly was shot dead in Shejaiye, the young man who died a few meters in front of me when he tried to evacuate his relatives during what was supposed to be a humanitarian ceasefire. 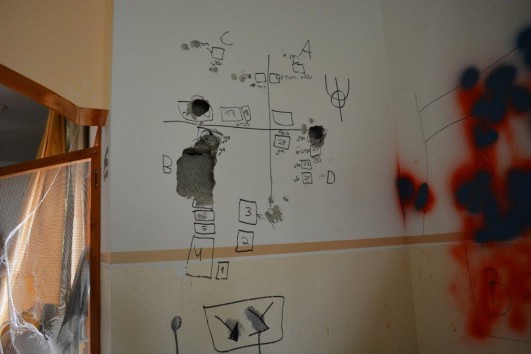 Military plans scribbled on the wall of a Palestinian home used as a military post by Israeli soldiers during Operation Protective Edge, the Gaza Strip, August 2014. (photo: Alexandr Nabokov) 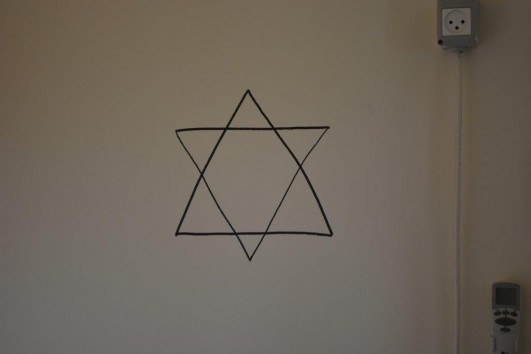 A Star of David scribbled on the wall of a Palestinian home used as a military post by Israeli soldiers during Operation Protective Edge, the Gaza Strip, August 2014. (photo: Alexandr Nabokov)

It’s not the first time I’ve seen destruction inside a house like this. It is one of four houses I have walked through that was used by Israeli forces during Operation Protective Edge, and the destruction in them is similar. I guide a TV crew around the house, pointing at the ‘X’ spraypainted outside the windows; a signal to fellow soldiers not to attack. I show the the crew the sandbags in the windows, how the soldiers made ​​use of pillowcases belonging to the house’s inhabitants and filled them with sand; that is why the floor tiles are broken – to gain access to the sand beneath. 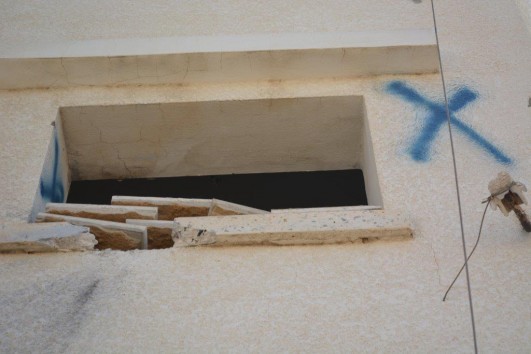 An ‘X’ spraypainted outside the window of a Palestinian home to signal to other IDF soldiers not to shoot there, the Gaza Strip, August 2014. (photo: Alexandr Nabokov)

Evidence of the soldiers’ presence is everywhere: the empty packages of underwear and the used ones scattered on the floor, the empty tins of food with Hebrew labels, wrapped sandwiches, two military shirts and a dark blue beret that were left behind, the shattered TV screen with a hammer beside it, the empty jewelry box. It is customary to give gifts of gold jewelry at Palestinian weddings. In one of the other four houses also used as a military outpost the owner showed me his wife’s empty jewelry box, along with a valuation certificate. When I mentioned this to my contact at the UN she confirmed that similar reports had been received all along the border areas between Gaza and Israel, where Israeli soldiers had set up military posts in private Palestinian homes. But don’t worry, this is the world’s most moral army. 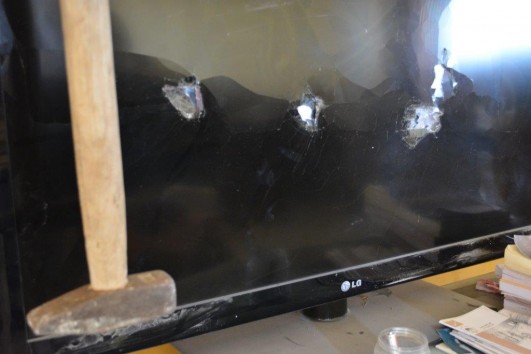 The hammer used to smash a television in a Palestinian home used as a military post by Israeli soldiers during Operation Protective Edge, the Gaza Strip, August 2014. (photo: Alexandr Nabokov) 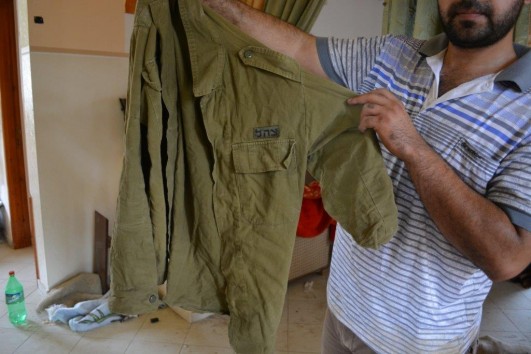 An IDF shirt left behind in a house used as a military post by Israeli soldiers during Operation Protective Edge, the Gaza Strip, August 2014. (photo: Alexandr Nabokov)

Those in the TV crew recoil when they see and smell the stench from the toilets. I can only confirm that it’s the same in all the houses I’ve been to; flushing toilets doesn’t seem to be part of military training. I show the crew the cover of a Koran that has had all its pages torn out, a family album with all its photographs missing. Erasing the memories of Palestinian history has long been part of Israeli warfare; history is what builds national identity. 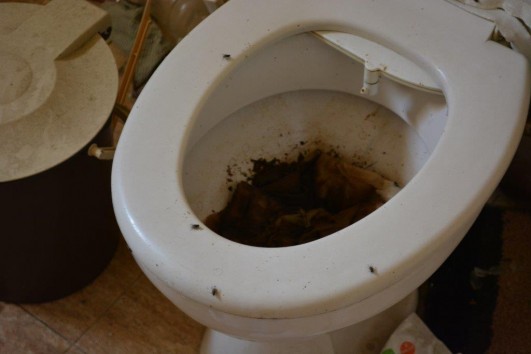 All the toilets in the house were clogged up and had not been flushed after the Palestinian home was used as a military post by Israeli soldiers during Operation Protective Edge, the Gaza Strip, August 2014. (photo: Alexandr Nabokov)

From the roof I point to other surrounding houses, showing how together they can strategically survey a large part of the area; the desolate land in front of them that had, until recently, been a thriving orchard. I point to the land closer to the border area, less than a hundred meters from us, traces of crawlers can be clearly seen. The tanks must have been neatly lined up side-by-side, shooting directly into the buildings. I point out a barn beyond where the tanks stood; there are dead cows and camels inside. It’s not likely the camels died of thirst.

It is the last day of the extended ceasefire and when we leave the area we are not alone; people who returned to what remains of their homes begin to leave them again, carrying their smallest children and only the most necessary belongings they could retrieve. They exit their houses in little rivulets, seeking out the paths back to friends and acquaintances or UN schools where they are taking shelter. This time they do not have to flee in a panic, but this time several of them also have no valuables to worry about.

Alexandr Nabokov is an international activist currently in Gaza.

Related:
How money vanishes into think air during a West Bank raid
In search of teens, soldiers ‘looted’ Palestinian homes