The IDF is developing new technology that will eventually cut down on the need for soldiers to go to the front lines. What does this mean for the Palestinians whose lives will hang on the decision of a machine? 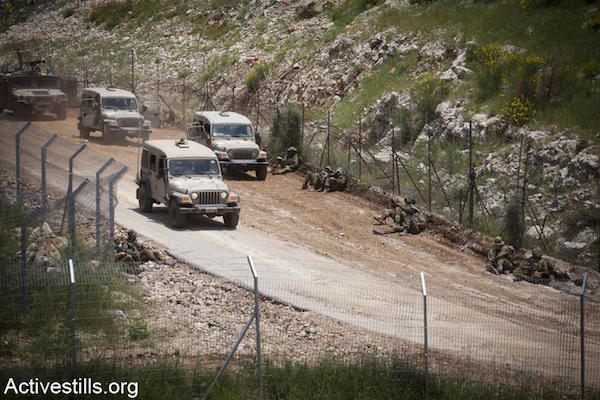 A blog post on the topic published on the IDF’s English-language website, which was was shared on the IDF’s official Facebook page, was accompanied by the comment: “In 10 years there won’t be any soldiers guarding Israel’s borders. And here’s why.”

That this is being used as a point of reassurance speaks volumes about the mentality of the Israeli military. The tone reads as: “Don’t worry, the occupation will still be going on in a decade’s time. But we’ll be using robots to maintain it instead.”

The introduction to the article takes this thrust further, describing how “the induction of these vehicles and robots into the battlefield will dramatically change the future of urban warfare, leading modern-day combat into new and unexpected directions.” It sounds as if this state of perpetual conflict is desirable — something the Israeli army is actively pursuing.

The eventual idea is to have unmanned vehicles and robots on the front lines “making autonomous decisions based on the information they are provided with.” This is in effect proposing that the decision as to whether someone in a combat zone lives or dies will be made by an algorithm. This level of technology is already in play in Russia, where mobile, weaponized robots have been deployed to guard ballistic missile installations. Later on in the piece, Col. Yaron Sagiv of the IDF’s Technology Division states that “[w]e are definitely going in a direction where autonomous soldiers could carry the weight in the war. The intention is to increase the quantity of robots.”

This intention reflects a trend that is increasing around the world. When it comes to patrolling borders, the United States has been using unmanned drones over the Arizona border for several years, which it uses to collect data and send video feeds back to a command center. (The drones are Israeli exports — Elbit Systems’ Hermes-450 model.) At one time, the Department of Homeland Security was considering weaponizing these drones, although the idea has apparently been shelved for the time being. Nonetheless, drone warfare constitutes one of the building blocks of the U.S.’s Afghanistan-Pakistan policy.

In terms of conflict situations, more and more armies are developing and testing technology that would hand over decision-making in combat areas to autonomous machines. The momentum has increased to the point that Human Rights Watch recently released a report calling for such innovations to be banned along with cluster bombs and land mines. The UN’s second multi-lateral meeting on “Lethal Autonomous Weapons Systems” (LAWS) took place last month, during which the Israeli representative stressed the need to “maintain an open mind” regarding such weaponry. 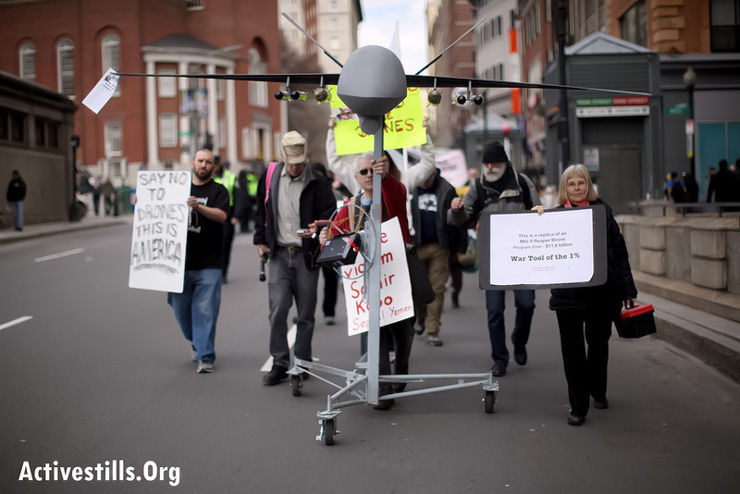 Activists protest the use of drones by American armed forces, April 13, 2013 in downtown Boston, MA. The protest came as part of the “April Days of Action”, a national campaign of counter-drone protests. (Photo: Tess Scheflan/Activestills.org)

In the spirit of such an open mind, let us consider a major point that is raised by these developments. If, indeed, the IDF is looking to drastically cut down on (or even do away with altogether) the need to have human beings in the battlefield, it removes a critical restraint on Israel’s preparedness to engage in conflict. The sight of soldiers being returned home to be buried is one of the key elements that causes a society to question its government’s participation in a war, and Israelis are particularly sensitive to the fate of IDF soldiers. With this risk alleviated, there will be far less to stay the government’s hand.

Such technology also further “sterilizes” the experience of soldiers participating in conflict. Already in last summer’s Gaza war, testimonies from IDF soldiers repeatedly described their lack of contact with other living beings, save for fellow soldiers; the words “like a video game” crop up again and again. This is partly due to the fact that entire neighborhoods were shelled to ruins before ground troops moved in, but also because so much of the IDF’s activity was based on long-range, indiscriminate fire.

With the advent of technology — tanks, cooperative automated attack robots and a host of other unmanned units — that keep most soldiers away from the front line, few will ever actually come face-to-face with the consequences of their actions. This is true for armies around the world, not just the IDF, and it raises grave concerns about the future of ethics in warfare, already a near-oxymoronic concept. When your target is nothing more than pixels on a screen, it is far easier to press the button.

According to the IDF, however, this is supposedly cause for celebration. The apparent guilelessness that accompanies the descriptions of the latest weapons technology is so cynical it is almost difficult to read. In one example, an IDF Spokesperson blog entry from a few years ago breathlessly lists the dimensions and merits of the “Tzefa Shirion,” a mine-clearing device that contains nearly a ton of C4 explosives and produces a 720-960 meter-squared blast radius. “Sounds impressive? Wait till you see it in action,” the blog continues, under which one can watch a video of the weapon detonating in an open field. Gazans have been able to see it in action when it was used to blow up residential streets in Operations Cast Lead and Protective Edge. No mention of the human cost on the IDF’s blog, though — just applause for a good, clean, life-saving explosion.

WATCH: ‘Tzefa Shirion’ rocket being detonated in an open field

Ultimately, the overarching message that permeates most of the IDF’s social media forays on the topic goes as follows: the targets of these weapons (i.e. Palestinians, occasionally Lebanese) are a faceless, nameless, threatening and homogenous entity that obligates the IDF to continuously innovate in “exciting” and “maverick” ways. The subtext suggests a population that is simply there to justify the development and/or purchase of the army’s latest toys, with the attendant endless bankrolling this requires (not to mention the fortune that private companies make exporting this technology). In this reckoning, there is only one set of lives at stake in this land, and it is not those in the crosshairs of the IDF’s expensive, cutting-edge arsenal.

Yes, Israel is indeed a hi-tech nation, and its relentless marketing as such has spilled over into the military domain; it sounds for all the world as if the army is marketing the next level of home entertainment technology and not highly-destructive weapons that are intended to be instrumental in subjugating an occupied population.

So next time you read about Israel as a “start-up miracle,” think about the impact that technology can and does have in this country, and about how it is used. Think about how much money is invested in “the art of war” here, and how such expenditures have rendered so many lives so cheap.