Recent statements by unnamed military sources attempt to confuse the issue of lower-powered but completely lethal ammunition used against Palestinians. 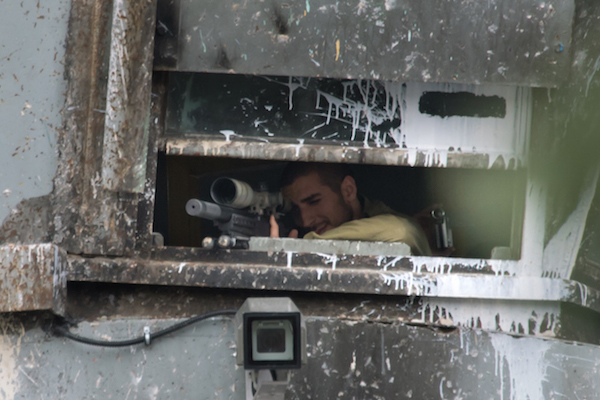 Let’s be clear: the Israeli military uses many kinds of weapons to kill and maim Palestinians in the West Bank. Many of them are “less-lethal” weapons intended to disperse crowds at demonstrations. Sometimes the people shot are among those throwing stones or Molotov cocktails. Sometimes they’re not. Every once in a while they’re journalists or human rights observers. Often these weapons are employed in routine violation of the regulations that are supposed to govern their use. B’Tselem wrote a report about the habitual illegal use of such weapons. Amnesty International titled a similar report, “Trigger-happy: Israel’s use of excessive force in the West Bank.”

One aspect of this troubling trend is the increasing use of live ammunition as a crowd control weapon. A new layer of this lethal trend is an accompanying attempt by military sources to obfuscate their nature and justify their use. Ido Kenan recently wrote about how unattributed military sources are frequently steno graphed by Israeli media. Two recent likely examples — striking because the phrasing is so similar in two different newspapers — appear in reports on the death of Palestinian youth Ziad Awad, who was shot dead by Israeli forces in clashes following his cousin’s funeral last week:

The force reported it opened fire with tear gas and stun grenades, and later fired at four Palestinians using a certain type of bullet, a 22 caliber known as “Ruger” fired from a special weapon designed for just that purpose, which have less powerful effects compared to regular live ammunition.

Soldiers responded by firing 0.22 caliber bullets from a Ruger rifle, which fires weaker shots compared to live fire, according to the sources. Non-lethal crowd control measures were also deployed during the incident.

Both papers cite anonymous — and therefore unaccountable — military sources who describe these smaller bullets as somehow not the same thing as “live fire.” The Jerusalem Post even includes this unattributed direct quote:

“The incident is still being checked. We did not use live fire,” one army source added.

First, there is the striking irresponsibility of both Haaretz and Jerusalem Post journalists for not providing any further context as to what constitutes “live ammunition,” despite thorough documentation by B’Tselem and others.

Then there is the shocking claim by the unnamed military source that these bullets are somehow not “live fire.” If you didn’t grow up with guns in the house, allow me to explain: the main difference between a 0.22 caliber bullet and the 0.223 caliber/5.56 mm bullets used in the Israeli military’s standard issue rifles is the amount of gunpowder behind the bullet, affecting its speed and range. While the size and shape of a bullet does affect how badly it will injure someone, both are live ammunition by any reasonable definition. Both can and do kill.

While living in Washington, D.C., I was once mugged and had a 0.22 pistol held to the back of my head. At the time, I didn’t give a shit that it was small caliber. I’m also relatively certain that the family and friends of Ziad Awad, who was likely killed by this kind of ammunition, don’t give a shit about the caliber of the bullet either.

In July 2009, following repeated warnings by B’Tselem that 0.22 bullets were being used unlawfully to disperse protests and may lead to the death of demonstrators, the previous MAG – Maj. General Avihai Mendelblit – wrote to B’Tselem that “the Ruger and similar means are not classified by the IDF as means for dispersing demonstrations or public disturbances. The rules for use of these means in Judea and Samaria are stringent, and comparable to the rules for opening fire with ‘live’ ammunition.” Earlier that year, in March 2009, Major Yehoshua Gurtler of the MAG Corps wrote to B’Tselem that “the IDF does not consider this means (the Ruger rifle) a substitute for the use of means for dispersing disturbances of the peace (such as stun grenades, rubber bullets, etc.” These answers, given to B’Tselem four and a half years ago, were not an accurate reflection of reality in the field even at the time they were given.

For years, B’Tselem has been cautioning against the Israeli military’s use of 0.22 bullets, and has repeatedly shown that statements made on the matter by the IDF Spokesperson and by military and Border Police officers contradict those made by the MAG Corps. The practical message conveyed by the military to soldiers in the field is that 0.22 bullets are not lethal ammunition, but rather another crowd control measure. This message is not only unlawful but puts people’s lives in danger.