By Yossi Dahan
(Translated from Hebrew by Shaked Spier) The Jewish Agency for Israel states on its website that its work concentrates on four fields: aliyah (the immigration of Jews from the diaspora to Israel), social action and giving, Israeli experience, and bringing Israel and Jewish communities abroad together. Let us focus on the Jewish Agency’s social giving.

In a meeting of the parliamentary control panel on June 15th, one of the biggest Israeli real estate scandals in recent years was exposed (as described in The Marker). Control of publicly owned real estate assets, owned by the Jewish National Fund (JNF) and designated for the absorption and integration of Jewish immigrants, were transferred to the Jewish Agency’s pension funds.

The real estate assets are part of the immigrant absorption center in Mevaseret Zion, which houses 1,300 Ethiopian immigrants to Israel. The pension fund put these assets on auction, which, de facto, means throwing the residents onto the street. For some reason, no one can explain or provide any documents that might clarify how publically owned real estate earmarked the absorption and integration of Jewish immigrants was handed over to a private institution, which leases it out in order to finance the Jewish Agency’s employee pension funds. These real estate deals are currently under legal examination and will be examined by the State Comptroller’s Office. 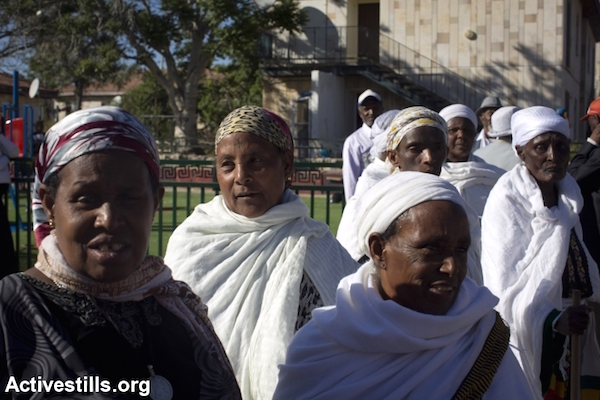 Ethiopian Jewish immigrants protest against a plan to evict them from an immigrant absorption center in Mevaseret Zion, near Jerusalem, May 1, 2014. (Oren Ziv/Activestills.org)

This real estate scandal is one in a long line of such scandals with which the Jewish Agency is involved – dubious real estate deals that are very profitable of the Jewish Agency. The common denominator in all of these deals is that their victims are from the weakest groups of Israeli society: immigrants and public housing tenants.

The State Comptroller wrote in 2003 about this dubious deal:

Although the deal is unusual in its extent […] it wasn’t a result of a governmental decision, and there were no calculations to determine the prices, for which the state will acquire the apartments […] the Housing and Construction Ministry, which is responsible for public housing, didn’t participate in the negotiations and isn’t signed onto the agreement. Instead of using the money for funding housing solutions for the needy – the state pays the Jewish Agency hundreds of millions of shekels for the acquisition of public housing apartments with their tenants (while taking the treatment [of the tenants] under its responsibility).

As stated above, the Jewish Agency has another goal beside social giving – an Israeli experience. Cynical is it may be, this is exactly the experience it gives immigrants and public housing tenants.