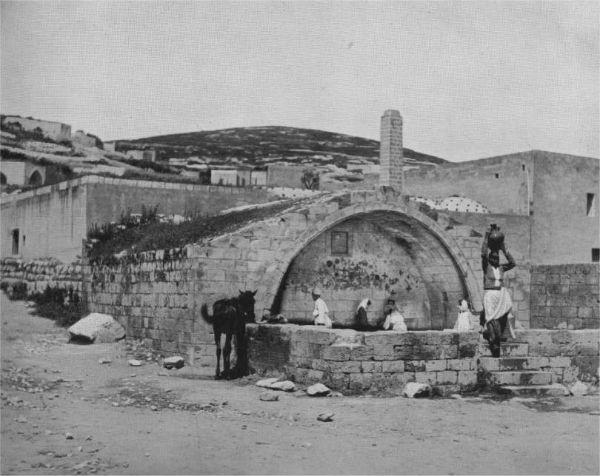 Nazareth's "Mary's Spring" in 1894. The hill in the background is the site of today's Upper Nazareth.

Nazareth, Jesus’s hometown, is today a bustling city of over 70,000 people. The people of Nazareth are termed “Arab citizens of Israel” or “1948 Palestinians,” depending on one’s politics. About a third of Nazarenes are Christians, the rest are Muslim.

On the hill rising above the dense town and its imposing Basilica of the Annunciation, lies Upper Nazareth (Hebrew: “Nazareth Illit”). This community was founded by Israel in 1957, a Jewish town situated so as to overlook the country’s largest solidly Arab community. However, realities in the Galilee transcend nationalist aspirations. Families from Nazareth proper have been moving over the years to the airier hilltop suburb. Today, about 15 percent of Upper Nazareth residents are Arabs, mostly Christians.

These Arabs have witnessed the enormous Hanukkiyahs (menorahs) places by the city over the Jewish holiday of Hannukah. Now, with the coming of Christmas, they approached the mayor, Shimon Gapso, and requested that a Christmas tree be placed as well. Gafso, reports Israeli news site NRG (owned by Maariv), refused staunchly. “Upper Nazareth is a Jewish town and all its symbols are Jewish,” said Gapso, “As long as I hold office, no non-Jewish symbol will be presented in the city.”

Arab members of the city council, representing a moderate public that chose to come and live in a heavily Jewish suburb, insisted. They mentioned the Hanukkiyahs erected in American cities that aren’t designated Jewish. Gapso ignored their pleas. “Let them go down to Lower Nazareth,” he said this week. To his support came the city’s chief rabbi, Isaiah Herzl, who said that erecting Christmas tree is unthinkable since it would be “offensive to Jewish eyes.”

Unlike the reporter at NRG, the author here at +972 Magazine has liberty to comment and analyse. It is almost scary to attempt this, since such a story would read so differently to different readers. Being a Jew, I know exactly how threatening Christmas is to us, being the most tempting symbol of non-Jewish life (I wouldn’t even say Christian life, since the roots of the holiday are pagan, it is celebrated by non-Christians and has been greatly stripped of its Christian content over the past century). We have all been brought up with the notion that holding on to Judaism requires resisting such symbols.

In the heart, that is.

By declaring Upper Nazareth Christmas resistant, Mayor Gapso exposes the great insecurity and confusion of the Jewish state. If the only way to maintain the Jewish character of his town is by showing complete lack of tolerance and resisting integration of its non-Jewish residents, then Upper Nazareth is in fact a self imposed ghetto, walled by fear and intolerance and so, by extension, is the entire state of Israel.

Having lived within these walls for so long, Mayor Gapso has absolutely no clue what non-Jews around the world would feel when hearing that the mayor of a Nazareth suburb bans Christmas trees. He is the mayor who stole Christmas, the mayor of an ethnocentric town with a name that hints at superiority, who rejects a symbol of universal tolerance.

Make no mistake, mayors always think forward to the next election. Mr. Gapso, who in the past made efforts to draw Jewish families into his town and reduce the percentage of Arabs in it, predicts that his act will draw support from the community. In that he does not differ from the Jewish mayors of other mixed towns, such as Akko’s Shimon Lankry, who take an intolerant position whenever that is an option, gaining power from the animosities within their communities.

In the spirit of the holidays, let us conclude this not with them but with a fond mention of a different city. The city of Haifa, under Mayor Yona Yahav, placed a huge Christmas tree right at the boundary of the its Jewish and Arab neighborhoods, (in fact, a bit further into the Jewish area), proving that sharing the festive season is possible even in this troubled land.