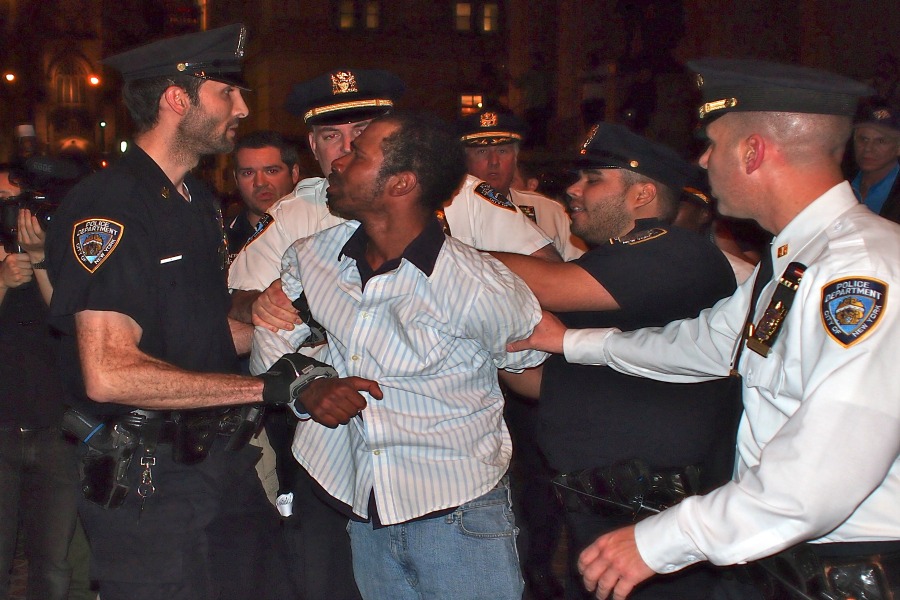 On Monday, a federal judge in New York ruled against the New York City Police Department’s “stop and frisk” practice (a policy not limited of course to New York). The judge found that the practice, as it has been applied, violates the constitutional rights of the plaintiffs.

Why does this matter here? Because the ruling chips away at systems that look too strong, too entrenched ever to be moved.

The situation of regular people with little power fighting a huge system that holds all the cards can creates immediate associations.  In recent years, prominent African-Americans have sometimes asked me how they can contribute to the Palestinian quest to end the occupation and live in freedom, from the experience of the American civil rights struggle.

It moves me when people who have fought a bloody and protracted struggle against an entire system devised to violate their human and civil rights see kinship and parallels with others fighting similar injustices. Decades later, these individuals look back and reach out their hands out to those still living under an intolerable regime built to constrain them.

Palestinians too have begun drawing on the amazing achievements of the American civil rights movement. The Freedom Rides held in 2011, the organization of popular resistance activities and unarmed demonstrations held every week for years against the route of the separation wall, are examples of techniques being borrowed and adapted.

I can also find comparisons from where I stand: in both societies, members of the dominant group who advocate for the rights of the “other” (the oppressed), face alienation and bitter hostility from the mainstream. Israeli Jews or American whites live in relative privilege, and most of them (at some point in history) either openly justify the system, or else quietly perpetuate the status quo. Both types often despise and even persecute members of their own group who fight for the “other.”

So victims on both sides of the struggle against oppression recognize the comparison. Activists agitating to change their own societies recognize that they face similar dynamics.

As of the ruling Monday, there’s another actor in the American racial divide that I wish would give some inspiration to our local conflict: the structures of injustice themselves.

In her book The New Jim Crow, Michelle Alexander painstakingly details how the formal end of Southern segregation laws in the mid-1960s did not translate into equality before the law. America’s systems of law enforcement, justice, incarceration, and legislation pertaining to ex-convicts stacked all decks against African-Americans and Hispanics – particularly young males. People are too often branded as criminals by cops just for being black, and put through the awful experience of being randomly stopped and physically investigated in humiliating incidents that no innocent person should suffer. They speak of the crime of “DWB” – driving (or even running) while black, which is enough to earn a shakedown. Henry Louis Gates was arrested for entering his own home. How much anger accrues based on a lifetime of fear and tension, just for being you?

The New York City Police department touted the “stop and frisk” policy as a silver bullet against crime. But its rampant use – millions upon millions of stops of an untold number of innocent people who would never be charged because there was simply no crime to be discovered – caused so much havoc among African-American and Hispanic communities that it came to be described as none other than (you guessed it) a military occupation. Those who were arrested were far more likely to be apprehended for petty crimes and then funneled through a criminal-production factory for the rest of their lives, than for example, someone like me.

Obviously, targeted communities suffer. But, as I have argued with relation to Israel and the occupation – all of society suffers from a warped application of justice which does not end at lines drawn between black, brown and white, nor at the Green Line.

The court ruling against stop and frisk differs from, say, a demonstration by social activists. Here, a member of America’s judicial system  determined that something within the governing system – the laws and their enforcement that are supposed to protect human beings – was rotten. Stop and frisk is just one link in a long chain of injustice, but condemning the de facto damage it has done can open the door to critique of other aspects. Civil society has been saying these things for years – now those with the power to change are listening.

The ruling therefore is a statement that those who hold the power, the gatekeepers, producers and interpreters of the laws, can point out and try to change failed policies on behalf of those harmed by it. Indeed, it is the obligation of the judiciary to do this when a practice violates the country’s core principles.

But it is hard to apply that lesson when Israel refuses to enshrine its core principles in a cohesive written constitution. And there’s a double protection for the unjust system of the real military occupation here: even if Israel had a constitution, it conveniently wouldn’t apply to non-citizens in territories Israel controls but has not placed under Israeli civil law.

The stop and frisk opinion is also relevant to the Israeli-Palestinian conflict because it addresses one of the most sensitive issues in Israeli life: security versus the inalienable rights of human beings. New Yorkers, including the judge, are no strangers to security fears. We know what it was like to avoid eye contact, to walk the streets in fear, and to be victims of violent crimes – personally. The chances of New Yorkers falling victim to crime in those bad years, were higher than being a terror victim in Israel in its peak years (yes, I did some unofficial calculations). But human rights and democratic principles come first – because they are a deeper form of security for any human society.

And I would be saying that even if the judge wasn’t my mother.