A Palestinian man identifies the Israeli settlers who cut down his olive trees. Police close the case anyway, claiming they have no idea who the perpetrator is — without ever questioning the suspects. 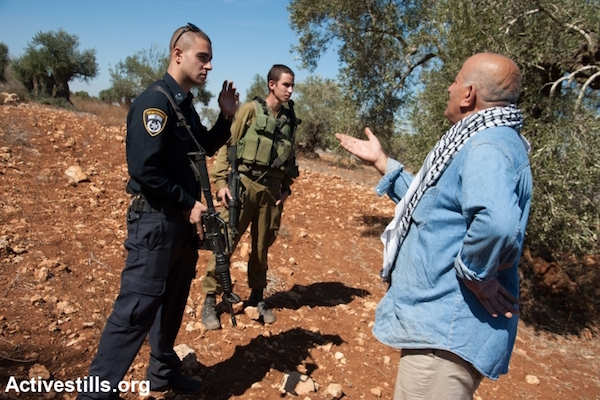 I am considering demanding a refund from Israeli Treasury for the portion of my taxes they spent on the division of the Israel National Police operating in the West Bank (Samaria and Judea Police Department, or SJPD), since it is clearly a superfluous expense. This blog is not, to say the least, an admirer of the SJPD, but this time special forces would be required to help it find its missing jaw.

The case goes as follows. The client, Abd Al Latif Dar Samkhan, who resides in the village of Ras Karkar, heard on April 19, 2014 from his neighbors that settlers were on his land damaging his olive trees. He hurried to the scene along with members of his family, where he found a group of Israeli civilians (accompanied by two dogs) who were busily cutting down his trees. The Israelis retreated to a nearby pond, where they mocked the angry landowner and told him they were not scared of the police, using the opportunity to curse the name of the Prophet Muhammad. The Israelis climbed into a white car and – according to the witnesses – vanished in the direction of the settlement Neriya. They left behind some 60 cut-down olive trees.

IDF and police forces reached the scene, where the police immediately took preliminary statements – with which it did nothing. In addition to the client was a witness, Azmi Samkhan. A month after the incident, on May 19, 2014, Azmi was summoned for a second testimony; he was asked to provide evidence that the land was indeed his. The police summoned him again the next day, and this time asked him to partake in a photo identification.

Azmi’s response was unequivocal: he positively identified three suspects. “This is the man who threw stones at me,” he says, “that is the one who was cutting down the trees,” and “this one climbed on top of a sapling in order to break it down.” The identities of the suspects are known but we are forbidden from publishing their names; the police have the names. Azmi also described, once more, the dogs that followed the attackers: a black dog and one colored brown and white.

The photo lineup held for Samkhan on May 20, 2014 was the last investigative action to be recorded in the case file. On April 28, 2015, nearly a year after the incident took place, and 11 months after Azmi identified three attackers, police closed the case. The clause justifying the act was UP — “unknown perpetrator.” That’s when my jaw dropped.

Let me explain. UP is one of nine clauses under which the police may close a case. It means that the police acknowledge that a crime took place, but that they have no clue as to the identity of the suspects. This is the most common clause used by the SJPD to close cases.

And, of course, this screw-up is accompanied by the usual failure to inform the victims of the crime that the investigation is being closed. Police closed the case on April 28, 2015 but only bothered to inform us – the attorneys of the victim – on June 25. Only on July 12 did we manage to get a copy of the half-empty case file. Our attorneys, Noa Amrami and Michal Pasovsky, sent an appeal in early August demanding the reopening of the case and the interrogation of the suspects, noting that “the fact that the suspects were not summoned [for interrogation] is to be construed as negligence and raises serious questions about the way the police handle criminality against Palestinians residing in the Territories.”

However, the chance that the criminals will be indicted after more than a year of a police failure is so small, that if it does happen we will probably be invited to a gala performance of the Flying Pigs Wing. So, again, I want the money I spent on the SJPD back, please.