Leftists always worry that the Right will exploit violence to advance its political agenda, so we remain silent. The Left needs to learn how to mourn while rejecting the political programs of our leaders — and even the victims. 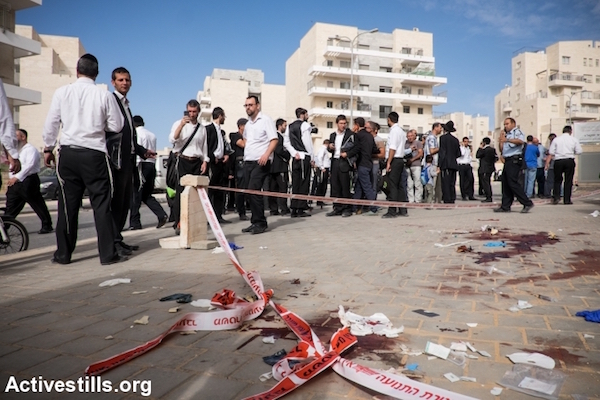 The scene of a stabbing attack in the city of Beit Shemesh, west of Jerusalem, October 22, 2015. (Activestills.org)

On Sunday, Dafna Meir, mother of six was murdered in her West Bank home with three of her children nearby, allegedly by a 16-year old Palestinian stabber. On Monday, a young pregnant woman was stabbed in her West Bank settlement of Tekoa; she is in stable condition. These attacks against unarmed civilians are unambiguously, absolutely and completely wrong.

There is no international convention for war or peacetime to condone such acts, and no justification of human morality. Not even the brutal instrumentality of politics defends attacks that are guaranteed to set back any national or collective goals. The occupation did not cause this 16 year old to kill Meir; the proof is that the vast majority of people living under Israeli occupation are not doing such things. The victims must be mourned and the killings condemned on an individual basis.

But there is more than an individual human side. Like it or not, these acts do have political meaning as well and they highlight how key political actors think at present.

As often happens, the Jewish-Israeli Left becomes mealy-mouthed when faced with such violence. I know why: we already know how the violence will be manipulated in the service of the Right, exploited to entrench the conditions we deeply believe perpetuate violence in general. We feel the Israeli media has overdosed on Jewish victimization for as long we’ve been conscious and we see how this is destroying both sides. We hate adding to it.

I believe it is our responsibility to swallow these bitter truths and speak out anyway — Bradley Burston has done so nobly. Disavowing such acts must be part of our embrace of universal humanity as well as an affirmation of our own moral guidelines.

Both Jews and Palestinians who oppose the occupation must be very honest and resist any subtle legitimization of violence against settlers. The creeping sense that settlers are not civilians and they are legitimate targets for violence must be rejected.

I don’t mind being called all sorts of names related to privilege, violence against unarmed settlers is not defensible in any way. Settlement in occupied areas violates international law but it is also a violation of international law to harm people — including settlers – who are not in uniform, not armed, not actively engaged in battle, and who do not pose an imminent threat to someone’s life.

Both the Jewish and Palestinian Left could do better.

But the Israeli Right’s exploitation of the death is intolerable. The blood had not even dried before Israeli politicians have pounced on her memory to dismiss criticism, justify violence against Palestinians, perpetuate political wrongs, and deepen them.

Thus, when U.S. Ambassador Dan Shapiro points out that there are two standards of law enforcement in the West Bank, Prime Minister Netanyahu waved the attacks in his face like a flag. “On the day that a murdered mother of six is buried and a pregnant woman is stabbed, [the Ambassador’s observations] are not acceptable and not correct,” said Netanyahu’s office in a statement. If he didn’t want such statements on the very day of her funeral, the conference where the Ambassador spoke should have been canceled. Instead, every other kind of policy conversation was deemed acceptable on that day, just not ones the prime minister doesn’t wish to hear, about policies he wishes to perpetuate.

Naftali Bennett also shamelessly paraded the death around on his Facebook page to encourage settlement. “We are all settlers,” he crowed on his page, before laying the cornerstone for a new high school dormitory in Otniel where she died. “Do not talk. Take action,” he wrote.

Now, it is true that Dafna Meir politicized her life by living deep inside the West Bank. But I reject the idea that mourning her death demands adopting her political platform.

So do Israelis. Ariana Melamed wrote a powerful and simple truth in Haaretz: 95 percent of Israelis have rejected settlement with their feet, despite the most enticing temptations the government can offer: cheap land, numerous tax exemptions, a disappearing Green Line. So Bennett may spew sickly platitudes like “life is the answer to terrorism.” But for Israelis, life is not settlement.

Finally, Israel’s Right ignores Palestinians killed by Israel every day. If anything, it justifies those it kills at all costs. The deputy defense minister calls for the expulsion of the Otniel killer’s family, collective punishment just like home demolitions. These actions are unimaginable for Jewish perpetrators. (To be clear, I wish they would not be used for anyone).

In sum, the Right is using the violence to ignore or justify what is wrong, and make the political circumstances worse. More Israelis and more Palestinians will suffer.

The role of the Left is to maintain our humanity and integrity by mourning the violence while rejecting the political program of the victim and our leaders. There is no historical imperative to advance those politics to honor the dead. After all, the country mourned Yitzhak Rabin for decades while throwing his political program in the bin.