It’s impossible to convince racists not to be racists; the problem is the silent majority. Instead of delivering speeches against racism, we should get the authorities to eliminate it from the city streets. Here’s how.

A few months ago I moved to the community of Srigim in the Elah Valley. I quickly noticed, and was bothered, that the sign at the entrance to Moshav Zekharya, which I pass every day, had been vandalized with the Arabic name of the community blacked out. I decided to do something. Not that I have an inexplicable passion for proper signage, but I felt that something very bad was going on here: the brutal and deliberate erasure of Arabic. Even worse was the silence of all those people and good neighbors who passed by it every day. 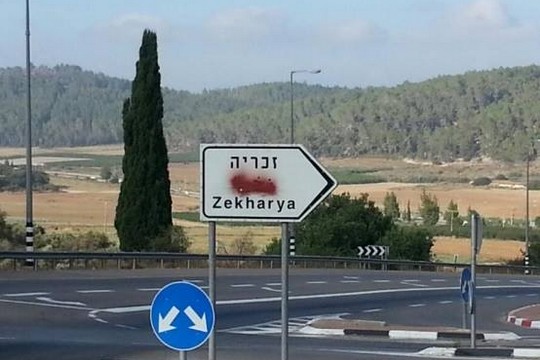 The Arabic on the road sign at the entrance to Zekharya was intentionally blacked out. (Photo by Ron Gerlitz)

I photographed the sign and posted about it on the Kifaya website belonging to the Shutafut-Sharakah coalition, whose goal is to report incidents of racism and pressure authorities to take action to combat them. (More about the role and purpose of Kifayah can be read here in Hebrew).

I took a chance and wrote on my Facebook page at the time that it would only be a matter of time before the sign was fixed. It couldn’t possibly be left like that. And in fact that’s what happened. The energetic staff of Shutafut-Sharakah contacted the regional council and the National Transport Company, and after several reminders they sent out their teams and replaced the sign.

So what’s so important about that sign? It’s very important. We can’t convince racists not to be racists. We won’t succeed and it’s a waste of time. They, the racists, are a minority — noisy, active, organized and dangerous, but a minority. The problem lies with some of the politicians or leaders who incite and encourage racism, and the majority – us – who remain silent. 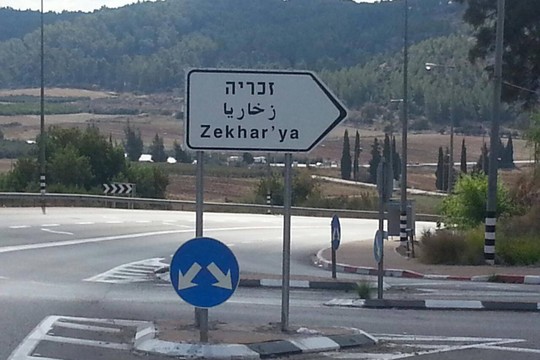 The sign at the entrance to Zekharya after Shutafut-Sharakah’s intervention. (Photo by Ron Gerlitz)

The tsunami of racism hasn’t receded

We hear strong and passionate condemnations of racism from the president, politicians, local council heads, educators and others. This racism is absolutely terrible – they say.

But condemnations won’t really help. It’s impossible to convince racists not to be racist. I also said that directly to President Rivlin: “Even you, Mr. President, can’t and won’t be able to convince the racists not to be racists.” What is possible, however, and must be done immediately, is to deal with public expressions of racism in the public space. Instead of Jerusalem Mayor Nir Barkat, Tel Aviv Mayor Ron Huldai and Haifa Mayor Yona Yahav making stirring speeches against racism, we have to get them to send their inspectors to remove “Death to Arabs” graffiti from the city streets.

We won’t be able to convince the racists to stop blacking out the Arabic from road signs, but we can — and it’s definitely possible — get the authorities to remove the manifestations of their racism from public spaces. We have become far too accustomed to seeing “Death to Arabs” signs or graffiti in the streets, shop windows declaring “no Arabs employed here,” Arabic place names erased from road signs, advertising for businesses that uses “Jewish labor only,” cafés that forbid their waiters from speaking Arabic among themselves, and other horrors of this type in Israel’s public spaces.

It’s up to us and us alone

Have you ever thought about what it’s like to be an Arab and to see “Death to Arabs” graffiti? Worse yet, to see it every day and then realize that nobody cares that it’s there? What message does that convey to Jewish children, if there is such graffiti in the streets and their parents (Us! For anyone who isn’t sure whom I’m addressing in this article) don’t care enough to clean it up? Why shouldn’t our children think that it’s a legitimate viewpoint?

The problem we all share, Jews and Arabs alike, is that we’ve become accustomed to passing by those horrors and thinking of it like the weather – it’s really not up to us. But if we’re honest with ourselves, it actually is. The battle against racism will not be waged by others. Only we citizens can do it, and nobody will do it in our place.

There is now an excellent website and an excellent team that is ready to fight manifestations of racism. All you have to do is report. Just as happened during the summer, when according to a report received by Kifaya, the head of the hospital in Nahariya (incidentally – an Arab himself, for anyone who thought that racism against Arabs is only a Jewish phenomenon) forbid his staff from speaking Arabic. After the team contacted the media, the prohibition was canceled.

Next time you see manifestations of racism in the streets, please don’t be lazy. Don’t just pass by, tell yourselves how wrong it is and continue along on your way. Cleansing our public spaces of racism is not someone else’s business, it’s the business of each and every one of us. You need to take action to remove racism from our public domain.

Ron Gerlitz is the co-executive director of Sikkuy-The Association for the Advancement of Civic Equality, and one of the initiators of Kifaya. Organizations that are interested in receiving guidance about to use Kifaya are invited to contact them at: info@kifaya.org.il

Related:
What was different about this war?
A frightening new era of Jewish-Arab relations in Israel
Blue or white collar, racism prevails in Israel’s job market