Just weeks after Jerusalem’s Jewish-Arab school was attacked by arsonists, President Obama met with two students to light the Hanukkah menorah. Inbar Shaked Vardi talks about her whirlwind trip to Washington DC, and why she has decided to stay at the school despite the threat of violence.

It all started with a Hanukkah menorah. Dan Shapiro, the U.S. ambassador to Israel, asked the Max Rayne Hand in Hand Jerusalem School to prepare a Hanukkah menorah for a competition. The winning menorah would be lit by President Obama during the White House’s ceremonial Hanukkah reception. The Jerusalem bilingual school’s menorah was declared the winner, and the Hand In Hand Center for Jewish Education in Israel decided to send two students to represent the school at the event. Mouran Ibrahim and I were chosen, along with Rivka Bardach from Hand In Hand’s governing council. That’s how we found ourselves flying to Washington DC on the first night of Hanukkah. 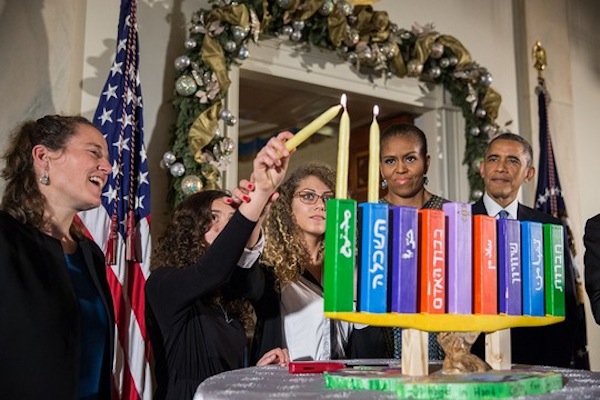 The following night we arrived at the White House for the reception. After hours of walking around the hallways of the White House (which were definitely impressive) and feeling quite ill from the meat dishes (neither of us are meat eaters), we arrived at the Red Room. From there we were taken to the Blue Room, where we took photographs with President Obama and First Lady Michelle, but not before exchanging a few words with them. After all, they had yet to accept our invitation to the bilingual school’s graduation ceremony.

From there we continued to the next room where the candle lighting took place. Obama gave a wonderful speech that talked about Cuba and the release of Alan Gross, an American international development worker who was imprisoned on the island until recently. Obama also spoke about our school, co-existence, latkes and the holiday of Hanukkah itself. We lit the candles while a rabbi and the crowd chanted the prayers.

The following day we were invited to speak on a panel at the United States Institute for Peace, under the title: “Refusing to be Enemies.” Mouran, Rivka and I spoke alongside Ned Lazarus, a lecturer on international relations at Georgetown University. I spoke about how our school gives children an opportunity to be active and influence the difficult reality in which we live. There are many organizations that allow adults to act, while as children we often find it hard to take part in those actions. Our school presents a specific worldview, and the fact that we are an integral part of the school’s community is a reflection of that. Personally, it is one of the reasons I chose to continue studying there.

We also spoke about the recent arson attack on the school. I said that it was frightening and horrible, but that we understand that the goal of the attack was to discourage us from existing as a school that represents co-existence. We decided not to let that happen.

The fact that many people arrived to listen showed us that what we do has influence. It was especially nice to hear Ned Lazarus speak highly about the work that our school does. At the end of the event, a woman from Beit Hanina, a Palestinian neighborhood in East Jerusalem, came up and thanked us for our words. That was the first time we spoke Arabic on the entire trip, and boy did it make us happy.

Inbar Shaked Vardi is a student at the Max Rayne Hand in Hand Bilingual School. This article was first published on +972′s Hebrew-language sister site, Local Call. Read it in Hebrew here.