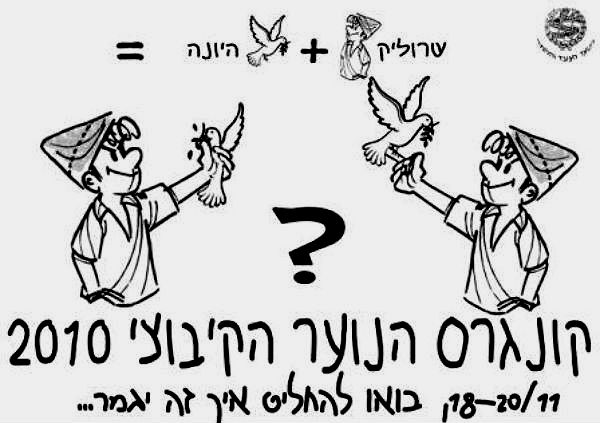 Invitation to a conference on the future of regional peace, organized by "The Working and Studying Youth". Its slogan: "Come and decide how this will end". Boy figure was designed by late cartoonist Kariel Gardosh to represent Israel.

The road to Israel is paved with good intentions. Itka and I read in the paper that extremist Jewish activists from the West Bank were to hold a demonstration in the city of Bat Yam. Their claim was that mixed Jewish-Arab couples were a growing phenomenon in that town, one that should be fought, since Arabs are “defiling our daughters”. The posters promoting their demonstration ask the reader: “would you let an Arab hit on your sister?” and promise appropriate Jewish retaliation.

The issue of mixed relationships was a favorite with Hitler and Goebels. The cover of Der Sturmer from 1938 shows a beautiful German girl embraced by a Jewish python. Itka and I would like to believe that while the nazis protested such unions on the streets, someone was there to challenge them. We couldn’t let Bat Yam be taken over by hatered, so we organized a counter- demonstration.

Someone else did too. We learned that arab activists from Jaffa, led by Kamal Agabariyyah, initiated a similar move and were alrady negotiating with Bat Yam’s police for a permit. They recieved one, and invited us to join fotrces. Kamal told Itka on the phone that we another group would join us: members of “The Working and Studying Youth” an Israeli youth movement, founded in 1924 by members of the Zionist labor movement. We welcomed their participation.

Then, upon arriving on the street corner provided for us by the police, a safe few hundred meters from the raging rabbis, we realized there is a problem. TWSY came by the multitudes, wearing their staple blue shirts. They brought with them an enornous banner, several meters accross bearing a statment we could not embrace, to say the least. It read: “Let’s keep Bat Yam Jewish and democratic”.

O what’s in a banner?

The root of the misunderstanding is clear. TWSY, while being tolerant towards ’48 Palestinians and even opposing the occupation, is a Zionist organization. Zionist theory sees the term “Jewish and Democratic” as one that defines a just Israel. In the eyes of such an activist, the banner simply reads: let’s keep Bat Yam just, as is our vision for the entire state.

It wouldn’t likely have read that way at all to passing drivers who’ve heard there is a racist demo in the town. The banner was bigger than all other signs and banners combined and the word “democratic” was written in a faded reddish hue, distinguishing it from the clear and bright “let’s keep Bat Yam Jewish”.

I found older TSWY members and approached them with two magic markers I had in my pocket. “Let’s add the words ‘and Arab’ to this” I suggested, ” So it would read ‘Let’s keep Bat Yam Jewish and Arab and democratic.’ I mean, even that is a bit awful, now that there are work immigrants and asylum seekers living here, who belong to neither group. But I see you worked a lot on this banner and this way you could keep waving it.”

The member thought a bit, then rejected my proposal.

“In that case, I’ll have to ask you to remove it. I find it to be offensive.”

“Look, it’s one thing to say ‘let’s keep the state Jewish and democratic’ because then you refer to it’s laws, not its population. I find that a disturbing oxymoron too, but one that’s open to debate, but with Bat Yam, I mean… I doubt that you give a damn about how Jewish its municipal laws are. What this reads like to me is ‘Let’s get Bat Yam rid of Arabs’, the exact message of the other demonstration.”

A policemen interfered and asked me to move away. I promised him that I was peaceful, but the policeman insisted. I did move away and alerted Itka, she became enraged and approached the man in the blue shirt with similar comments and offers. The TWSYer would make no concession.

“Remove this one banner” we begged, “we will remove any sign of ours that offend you”. The one I was holding read “We like Arabs”. Itka was holding a megaphone. We were now talking to a more senior member. He was cold and aloof with us and did nothing to seek a solution. I knew why. He was threatened by the “post-Zionists”, the peculiar, mysterious foes of his well-willing organization, too threatened to even read his own group’s sign and see how ridiculous it was with or without a post-Zionist interpretation.

“We are here together, let’s work together on a solution to this.” We pleaded. “We can demonstrate under signs that don’t speak our minds exactly, but not under a racist sign, not under one that offends us, and lets face it. It’s enormous!”

“You don’t believe in cooperation?”

“You don’t believe in compromise?”

Not only that, but he ordered the sign moved away from where most TWSY members were chanting “We don’t understand / why there’s racism in this land”, and into the ranks of the other activists. “Make it so nothing can hide it” he ordered.

Not wanting to cause conflict among the ranks of those who gathered for the same cause, I gave up and got back to demonstating. My skull, however, was exploding with thoughts and questions: Isn’t a conscious racist better than one who is blind to the racism of his own messages? In talking to right-wing activists, as we now did, exchanging harsh comments with those of them who left their demonstration, you’re at least dealing with someone who’s awake.

The majority of Israelis have come to view Zionist attitudes as “non political”. They accept them without questioning. They hold on to flawed concepts even when they become further distorted by a simple lack of clear thoinking. At least the TWSYer, too, seemed as confused and frustrated as we were. “Stupid banner.” one of them grumbled, as he ducked under it after debating us, “Stupid, stupid banner”.