The EU’s measures on settlements, limited as they were, remain a source of serious concern in Jerusalem. Some in the Israeli Right hope that the rise of the ‘Euro-Skeptics’ will rid Israel of the problem.

The year 2013 was a turning point with regards to the European Union’s role in Israeli-Palestinian conflict. Until then, one could hardly speak of any European political involvement that transcended the role of banker for American-led efforts and various civil society initiatives. The working assumption was that the Americans will create the solution, the Europeans will pay for it, and that’s it.

In fact, until very recently, one could hardly speak of European diplomacy on any front; diplomacy and foreign policy was left to the member states. The creation of an EU foreign ministry of sorts — in the form of the High Representative of the Union for Foreign Affairs and Security Policy — did change things, though. Press coverage of the crisis in Ukraine already started a discussion about – and not for the first time – “the EU’s policy.”

Greater involvement by the EU in Israel/Palestine is also the result of changes on the ground, most notably the American failure to generate any positive political process, especially on the Israeli side. While Europe backed Secretary of State Kerry’s recent efforts, the EU also took serious independent measures of its own. The much-discussed settlement guidelines regarding grants to Israeli entities and the decision on labeling of settlement products gave many the feeling that the EU is indeed becoming a leading actor in the region.

In the Israeli Right today, many see the EU as extremely hostile to Israel, a point of view that has led to the public humiliation of the EU’s most pro-Israel elements, as was demonstrated during the visit of EU Parliament President Martin Schultz in Jerusalem. At the same time, the Israeli Left and some other elements think that the EU is the greatest hope for ending the occupation now that the U.S. appears unwilling or unable to do it.

In recent months I had the chance to speak EU diplomats and bureaucrats, including those involved in the Middle East. They all dismissed such theories. Everyone I spoke to began by stating the EU doesn’t want to and cannot replace the U.S. in the region, nor will it use its power to sanction Israel over the occupation. “We don’t want to lead the process,” was what I heard again and again.

At the same time, there was always a certain discernible satisfaction with the fact that, for the first time, Israelis are noticing the EU – and even listening to the messages coming from Europe. Israel ignored all messages regarding the occupation and especially the settlements for years, but the guidelines got Jerusalem’s attention. Since up-and-coming political entities tend to seek to increase their influence rather than diminish it, one might expect this trend to continue. The EU will not lead a diplomatic process, but it might try and use its regulatory power — all those agreements and plans that the EU makes — to push the political process forward. My own opinion is that this is probably the most realistic and effective approach out there. 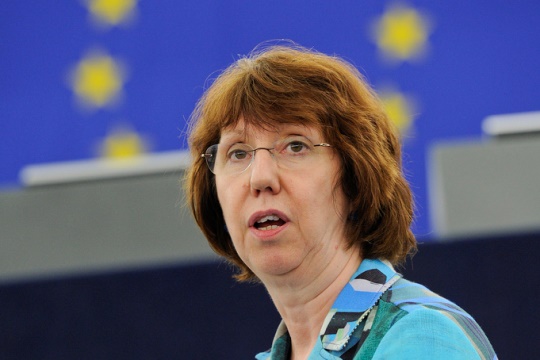 EU High Representative Catherine Ashton. Some in Israel tried to suggest her office was behind recent EU measures on the settlements (European Union / CC BY-NC-ND 2.0)

The question now is whether the rise of the ‘Euro-Skeptics’ and the hard-right will change all that. I won’t go into the election results themselves here, but it is imaginable that a Europe more occupied with its own internal pressure, and one that is more influenced by forces that object any form of EU policy – foreign policy being the worst kind – will be less likely to maintain its increasing pace of diplomatic involvement. And that’s without any mention of the the European radical right’s hostility to anything Arab or Muslim, which could also play a part in reversing last year’s trends.

That is certainly the hope in Jerusalem, and one could detect some satisfaction among Israeli commentators who covered the elections. Personally, I think that such celebrations were premature. The EU is not going to end the occupation on its own, but unless a major crisis develops in the union, and for that to happen ‘Euro-Skeptics’ will need to win some national elections, the current trends are likely to continue or even slowly intensify.

The EU is likely to continue testing its normative power with regards to Israel despite the election results. Europe is already avoiding a renewal of the Action Plan that regulates its trade ties with Israel (this means that the agreement is not updated, not that it’s canceled). Labeling settlement products is around the corner, but Israel should be more bothered by the possibility – which still seems far away – of a greater focus being put on Israelis companies and entities that operate in the Palestinian territories (and not just to those that are based there). Much of the Israeli economic system would be exposed to such pressure.

Those in Israel who think that the problem was with Catherine Ashton herself or with some of the mid-level diplomats serving under her, as Israeli officials suggested, still need to come up with evidence to support their theory. Foreign and prime ministers of the member states have so far backed the recent EU measures vis-a-vis Israel and its settlements. In fact, the rift between Jerusalem and Berlin went much further than anyone expected, leading Germany to suspend its planed discount for the purchase of war ships. My impression is that it is fairly convenient for EU member states to blame Brussels for measures taken against Jerusalem, but in reality there is a growing impatience with the occupation, even more than EU policy suggests.

Two final notes: EU foreign policy will depend on the identity of the person who replaces Lady Ashton as high commissioner. As the strange frenzy introduced by John Kerry suggests, personalities matter.

There is a also a certain detectable Right-Left polarization taking place in Europe on the Israeli-Palestinian question, with the Right being slightly more sympathetic to Israel in many countries – though we are far from the kind of synergy the Likud has with the Republican Party and the right-wing media in the U.S.

As for the radical right and the ‘Euro-Skeptics,’ their Israel-Palestine record is even less clear, to the extent that it even exists. The blunt anti-Semitism of some of those parties led Israeli officials to avoid contact with them; and most Jewish communities have done the same. In recent years, the Israeli hard-right and settlers have shown a greater openness to the radical right in Europe, and the new generation of EU populists is more Islamophobic than it is anti-Semitic. As the Right here feels more isolated from the world, and the Right in Europe becomes more powerful and important, relations could get even closer. At times of crisis, you don’t get to pick your friends.

Related:
The day Europe got Israel’s attention
Will Europe take a leading role on Israel/Palestine?
EU diplomats to Brussels: Put your money where your mouth is