Previous report from the human rights organization examined the Israeli airstrike that took the lives of 12 Palestinian civilians, ten of them from the same family. 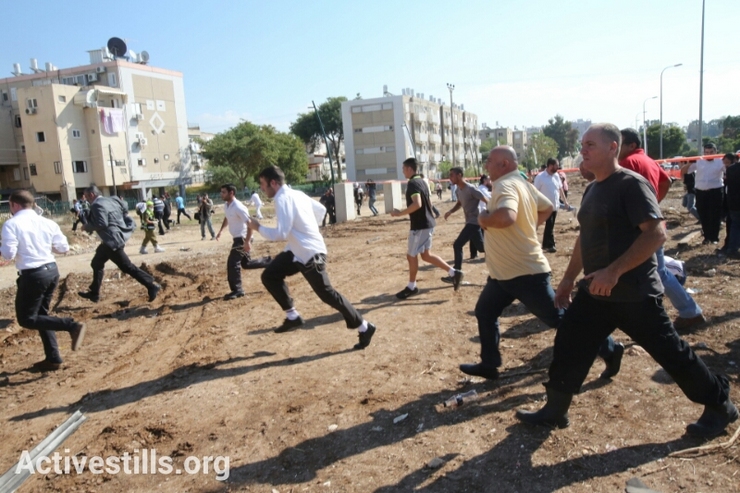 Israeli civilians run to take cover during a rocket attack from the Gaza Strip on November 15, 2012 in the southern city of Kiryat Malachi, Israel. (photo by: Yotam Ronen/Activestills.org)

Human Rigths Watch has condemned the targeting of the Israeli civilian population by Palestinian militants during the week-long “Pillar of Defense” military operation, which took place last month.

A piece posted on the HRW site states that:

The rocket attacks, including the first from Gaza to strike the Tel Aviv and Jerusalem areas, killed three Israeli civilians, wounded at least 38, several seriously, and destroyed civilian property. Rockets that fell short of their intended targets in Israel apparently killed at least two Palestinians in Gaza and wounded others, Human Rights Watch said.

“Palestinian armed groups made clear in their statements that harming civilians was their aim,” said Sarah Leah Whitson, Middle East director at Human Rights Watch. “There is simply no legal justification for launching rockets at populated areas.”

As an example of the intentional targeting of civilians, the report lists several occasions in which rockets hit Israeli civilian targets, including one grad rocket that took the lives of three people in the town of Kiryat Malachi, south of Tel Aviv. Human Rights Watch also brings testimonies of civilians affected by the rockets.

This is the latest in a series of reports and statements by HRW on the effect of the assault on Gaza on the lives of civilians. An earlier piece documented the result of an Israeli airstrike on a residential home, which took the lives of no less than 12 civilians, ten of them from the same family.

At least 140 Palestinians were killed during the Israeli attack on Gaza last November, most of them civilians. Six Israelis were killed from rockets fired from the Gaza Strip.